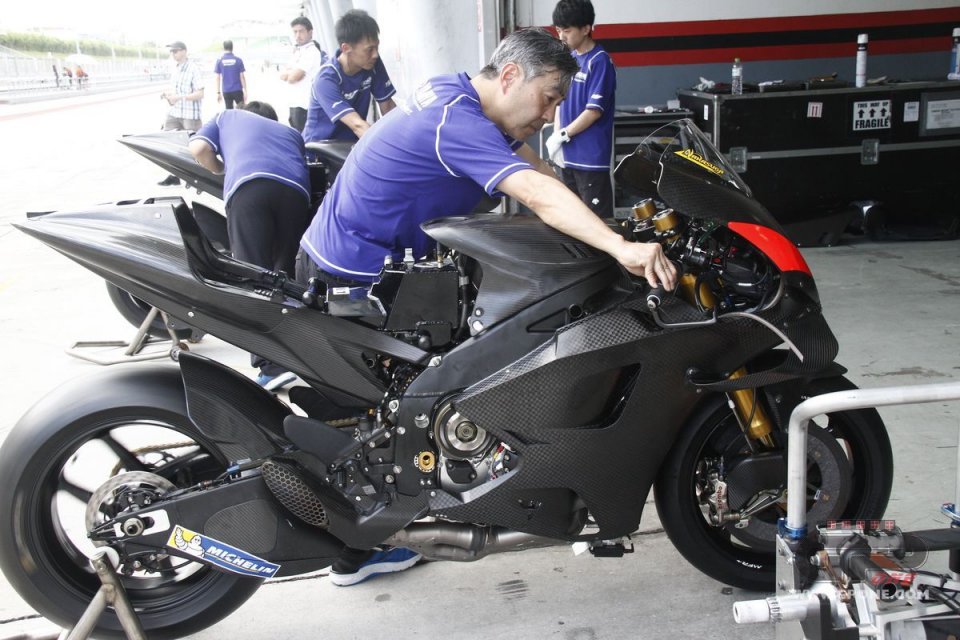 It came as a surprise to the other teams to see that Yamaha didn't send test rider Nakasuga out on the new M1 already on day one of testing.

To make up for this, there were a number of R1s on track, in various configurations: Superbike, 8 Hours and even Endurance. Nakasuga, who scored a second place finish in the 2012 MotoGP at Valencia, even rode a Superbike, and was accredited with an (unofficial) time of 2.02. Not at all bad considering that 45-year old Yukio Kagayama, on track with a Suzuki GSX-RR, set a 2.05.

Nakasuga started work on the M1 only yesterday, when Maio Meregalli, also arrived in the Petronas team garage and politely asked us not to come too close, considering that these tests are in fact closed to the press.

Maio talked to us about an exchange of emails between Honda, Yamaha and KTM, in which the manufacturers apparently came to a gentlemen's agreement so as to avoid 'unwelcome visitors'.

There were three of us in pitlane for these tests: aside from myself, Marco Caregnato, also from GPOne and Peter McLaren, writing for Crash.net. Not exactly an unbearable press presence.

There were also a few photographers but local guys and not those who generally work in MotoGP, who are set to arrive in a few days' time.

For the record, and for reasons perhaps linked to nationality, neither Aprilia nor Ducati showed any sign of alarm at our presence. They made sure we were well fed in fact, with fettuccine al ragù and tagliatelle with vegetables. Thank-you, it was very much appreciated. We often reminisce about days gone by, but we don't miss having to steal food from the breakfast buffet to eat later in the day, as we did in the 70s.

The Noale manufacturer even allowed us to mount four GoPros on Bradley Smith's RS-GP this morning, to record an on-board (which you will soon see) and Romano Albesiano and Massimo Rivola, the new Aprilia CEO, both appeared relaxed and cheerful.

This obsession with secrecy, and all the stress it brings, is a typical Japanese trait.
Yes, because it's definitely not the press that reveals the manufacturers' secrets.

Members of the various teams wander up and down pitlane, to kill time, stopping and chatting in front of their rivals' garages. And they know what they are looking for!

The bike, like the best factory machines, shows off a new ultra-light and super-resistant carbon fairing, identifiable by its 'chequered' weave.
This year it seems that weight, along with aerodynamics, has become key.

The fairing are increasingly 'open' to allow for the release of heat produced by these 280 HP engines, and great attention is also being paid to the cooling of ECUs, located below the shell of the fake tank.

Today it is Jonas Folger's turn to ride the 2018 M1. The test rider, 2nd at Sachsenring in 2017 before having to withdraw for health reasons, listened on during Nakasuga's technical meetings yesterday.

At the same time, Valentino Rossi and Maverick Vinales are arriving in Jakarta for the team presentation press conference, taking place on 4 February at the Four Seasons Hotel.
We will be there.