It's easy to point the finger when you're wrong, but it's even easier to make excuses and in both cases you don't learn anything.

This is a lesson that sport has taught us for some time and that should be metabolized if you want to become part of the small circle of winners, instead of remaining in that of the losers.

This is even more true when you can emerge but, for one reason or another, you are unable to make the leap in quality.

This is the case of Ducati and its riders who since 2017 have had the potential to hit the big target yet, year after year, they’ve missed out. Without even having, for three seasons now, the excuse of fighting against a phenomenon.

It's true, Fabio Quartararo fully deserves to defend the title he won last year, but the impression is that the Ducati riders are making his life too easy. While in fact, for better or for worse, Aleix Espargarò and Aprilia are playing the role of antagonists with great determination, given that the Spaniard like the Frenchman is the only rider on the track not to have any zeroes in the standings, the Ducati army finds itself with the designated main man, Pecco Bagnaia, with four zeros in the box and 91 points behind. And it’s worth mentioning that three of those setbacks were caused by crashes due to excessive self-confidence and only one, that of Barcelona, ​​caused by Nakagami's mistake.

Avoidable crashes? Of course, even if it is easy to say after, but if a slide when you are fighting for the victory is acceptable, the ones that happen for having exceeded the limit or at the beginning of a scrap are less forgivable. Because it is easy to blame a less performing tyre: you must always ride within the limits of what you have in your hands.

The world championship is not won on Saturday and to have the best chance of succeeding, the first thing is not to lose too many points on the way. Always occupy the centre of the ring or, to use another metaphor, stay with the leading group in the marathon.

Having a good strategy doesn't hurt either, or when you understand that your opponent's intention is to dictate the pace right from the start, you must do everything to stop him. In fact, not all passes are made to lead the race. You can also try to slow things down. Doesn't Valentino Rossi's strategy with Casey Stoner at Laguna Seca mean anything to you?

Of course, for Bagnaia and Ducati, beating Quartararo is now a categorical imperative if he wants to get back into the game, but are we sure that always risking 100% is the right strategy? 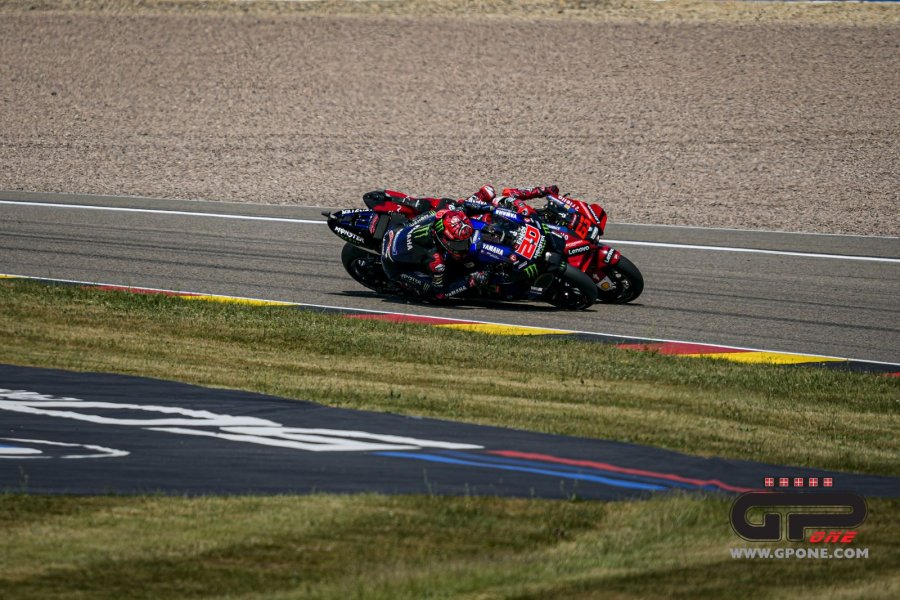 And again: at this point, with half the championship to go and 250 points still up for grabs, does it make sense for Ducati to put so much pressure on itself?

In a normal situation and barring major surprises, the world championship is lost. Ducati, taking football as an example, should try and ‘mark’ Fabio, try and prevent him from playing his game. Always with the utmost respect for fairness, of course.

The reality, on the other hand, is quite different: the Borgo Panigale manufacturer has eight bikes on the grid but each one does his own race, and it is crystal-clear that this is the case: Bagnaia feels he is the striker and expects to play alone, Miller has already changed his jersey, Bastianini and Martin are fighting for the remaining place in the official team, while the other three without any strange ideas in their heads, Zarco, Marini and Di Giannantonio, just get on with the job and coincidentally, score good results.

Agostini is right: success comes when a fast rider has a fast bike and is assisted by an excellent team. Now assuming that the Desmosedici is more than competitive, what is Ducati missing as an internal, official team to excel?

Just a little bit of strategy.

People will say that Ducati cannot force its other riders to put themselves at the disposal of the brand, as the teams are all competing against each other. The answer is only one: why not?

In fact, what is the point of winning five Grands Prix, and scoring five second places and four thirds for a total of 14 podiums if you are unable to put this firepower to effective use?

We know that motorcycle racing does not lend itself to this type of reasoning. It is an individual sport, but what is the advantage of having so many pieces on the board if each of them thinks they can move like a queen?

The game is won when the roles are assigned, when there is order. Unless of course – and this has been the case with Honda for years - you have a rider who is far superior to your rivals.

Absurdly, Yamaha this year, with only Fabio playing up front, has an advantage: in fact, his opponents are constantly stealing points from each other. Helped, in the last few years, by the fact that on the track there are virtually only factory bikes. Without this, however - and this is absurd - helping to have hard-fought races with a lot of overtaking.

By the way: with Sunday's race time, Quartararo would have finished third last year, behind Marquez and Oliveira. (Although it must be said, of course, that Fabio dialled it down a bit after Pecco's crash).