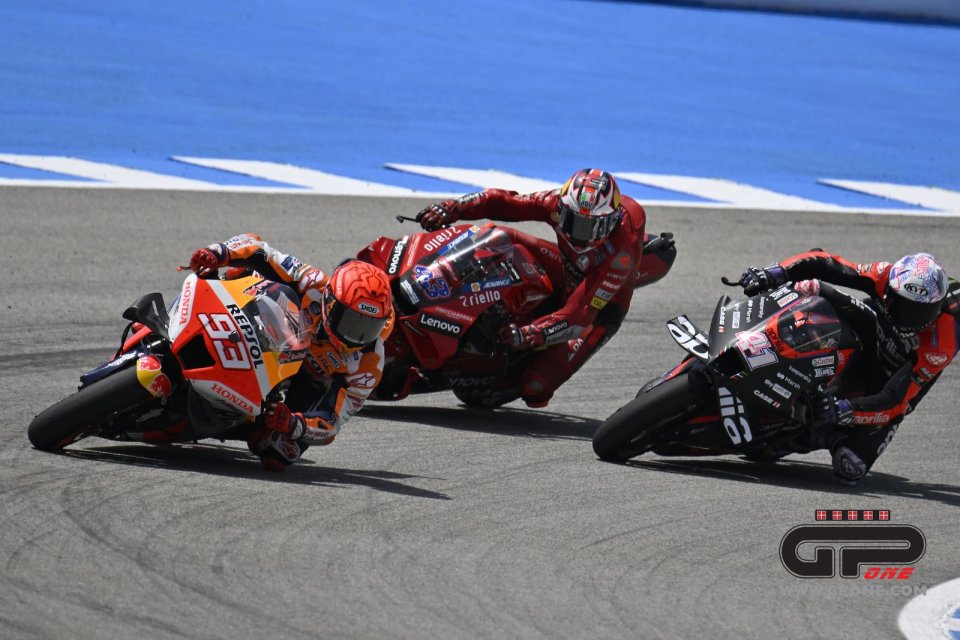 If you love overtaking and counter-overtaking, in purest Superbike-style and you missed the Jerez Grand Prix, don't bother watching the race. It’s not for you.

If, on the other hand, you are one of those who like to be in suspense for 25 laps, don’t bother reading this and start the video: you won’t be disappointed. OK? Now you have abandoned this article, can we continue? Well, I'm starting...

Nothing happened at Jerez, but it was precisely this 'nothing' that was exciting because we saw two distinct Grands Prix: the one for the win between Pecco Bagnaia and Fabio Quartararo who, as was expected after qualifying, made their own race and the one for third place between Jack Miller, Marc Marquez and Aleix Espargarò.

Two identical battles with profoundly different endings, because while the Ducati rider never gave the world champion any chance to overtake, always riding on a knife-edge, but apparently with full control and the bike (s) always on the same line as if on one track, Marc Marquez livened up the other confrontation, sandwiched between Jackass and the Aprilia rider, and absolutely determined to fight for a good result. At any cost.

A first winning attack on Miller, a loss of control but with a save like in the old days with the result, however, of finding himself fifth behind Aleix and Jack and then an unlikely deep braking move, all on the outside, going sideways to close the line, which allowed him to stay in front and finish the Grand Prix just off the podium.

Marquez: a 4th place celebrated as a victory

A fourth place celebrated as a victory with a lot of glove-throwing to the public. A gesture that says a lot about the satisfaction of the Cervera champion who rode the Honda RC213-V to the limit of its possibilities, not to his own.

A fact confirmed by the 7th place of Takaaki Nakagami, always fast in Jerez, behind Mir, just two seconds behind Marc.

The final five laps of this trio, and the last one of Pecco and Fabio who crossed the line separated by less than three tenths, were enough to liven up a Grand Prix raced by these five riders always on the razor's edge. The fact that the Bagnaia-Quartararo battle was particularly razor-sharp when compared with the trio of pursuers matters little: this hyper-technological MotoGP has now accustomed us – whether we like it or not - to battles of this type. Because all you need is something that doesn’t work to transform a winning rider into a supporting actor.

That’s the case of Enea Bastianini whose efforts earned him just an eighth position, which he picked up by a whisker over the less experienced but extremely promising Bezzecchi.

The rest was undercard stuff with crashes for Zarco and Bradl and Martin, who then returned to the race dead last.

Unfortunately, this MotoGP leaves little to the imagination if the electronics and mechanics match perfectly, and I feel sure that the protagonists will forgive us if, after six Grands Prix, we can say that the standings, with Quartararo and Aleix Espargarò at the head of the world championship table separated by just 7 points, ahead of Bastianini by 20 points doesn’t convince us.

The first two, in fact, are the only ones who don’t have even a zero on the scoreboard. In boxing speak, they have always remained in the centre of the ring. And if we think that Marquez with a no-show and a zero is in ninth place, 45 points from the top, well, we can expect that a lot of emotions are still to come.

We have seen some tough and physically very good boxers, but on the carpet, sorry on the asphalt, the only one dancing today was Marquez who, as our man Carlo Pernat rightly says, is a Marc 'minus something', but always in possession, inside his right glove, of a knock-out blow. Once, of course, he has recovered...

That said, the world championship begins now, with Pecco fifth overall after making up the first 5 points on Quartararo and who is now at -33.

We’re back again in two weeks, on May 15th, at Le Mans. It would be nice to be able to say 'seconds out', but here we are thinking about tenths and hundredths. A stellar comparison? Yes and no. We have to get used to these new and increasingly perfect machines that we still call 'motorbikes', but they are increasingly similar to F1 single-seaters with only two wheels...