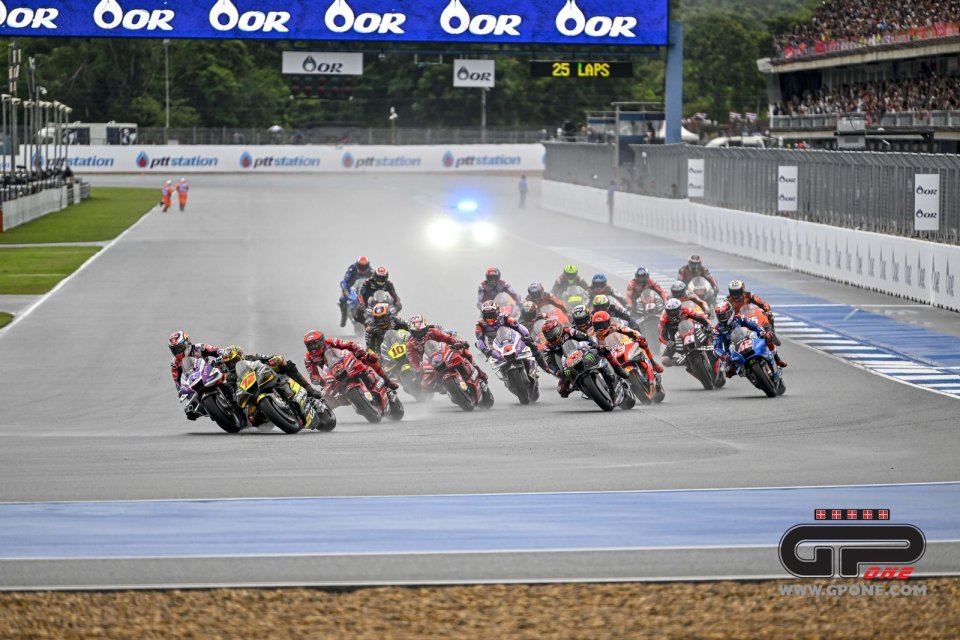 Supreme Court says that if Bagnaia wins the world championship it is not because he has been helped, but simply because he is riding the best bike of the lot and is himself an excellent rider. More reliable than his teammate, Jack Miller, more experienced than the buccaneering Enea Bastianini and not even comparable with the other Ducati riders.

This is the reality, one could say it is my opinion, but it is also reality.

At Buriram, however, he did not steal anything: Fabio Quartararo and Yamaha were simply not up to the challenge. And the fact that he finished outside the points has nothing to do with the fact that there were five Ducatis ahead of him.

The world championship can also be won by taking a risk, but Fabio probably didn't really have the M1 under his control today, even if I would have preferred to see him more aggressive, because irrespective of the inherent risk in every crash, to finish in 17th place, he might as well have risked a slide.

The fact is that now true champions are a rare commodity, riders capable of making a difference, with any bike in their hands, and in any situation. There is one, but I won’t mention who it is, knowing full well that the experts will recognize him.

I am not one of those who are scandalized by 'team games', but I’m not even - in spite of my short-sightedness - among those who pretend not to see. At Buriram Zarco came up vehemently on Bagnaia but did finish the job, he admitted it and that’s OK. After all, what would he have gained with a podium? He is still looking for a victory, not a placement and we must not forget that Dall’Igna rescued him when he was without a ride. A bit of gratitude is OK therefore, and there is nothing scandalous in this.

After all, I repeat, Quartararo is doing everything by himself, since in Thailand he again finished behind Franco Morbidelli, 13th and just ahead of Crutchlow who has been out for two years. So it’s his fault. He's probably pissed off (and in fact he didn't speak) for some reason. Yamaha is defenceless at the moment. It couldn’t even ‘stop’ Morbidelli because Fabio was 12 seconds and four positions behind him.

In any case, Quartararo has lost 89 points in the last 7 Grands Prix, and Ducati is responsible for that up to a certain point: quite simply he is losing the world championship.

Okay, I've already written too much. We’ll leave the fanaticism, as it should be, to the fans. Quartararo is a great rider and we are sorry about his incredible decline at the end of the season, but when you are like a cutthroat for the entire championship, it is possible.

Bagnaia, as I repeat again, is an excellent rider. And he has a bike that has deserved the world championship since 2017, but with a champion on the track, this was not possible.

This, like the previous one and the one in 2019 is not a spectacular world championship, as far as the idols to be brought down that contribute to creating legends are concerned, but from mid-season onwards there have been some good races. It's nobody's fault. Sport is like that. There are years in which giants run, and for the others, even the very good ones, there is no hope. Just ask the multitude of Kenyans and Ethiopians what they think of Kipchoge.