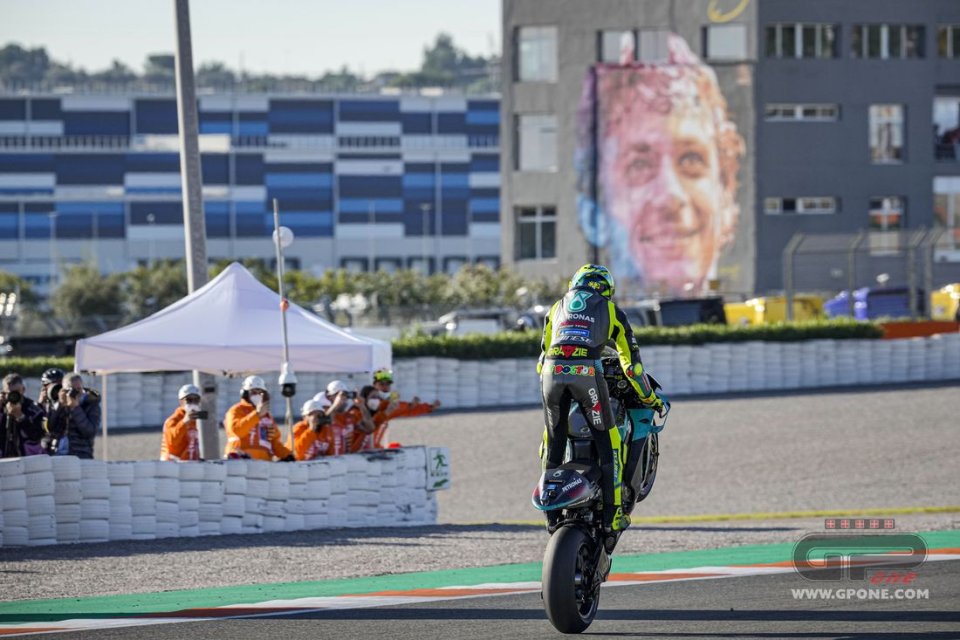 Valentino Rossi's 2021 season, the last of his incredible World Championship career that began in 1996, was characterized by performances that were anything but exciting but the Doctor desperately wanted to end with a flourish or in any case with a dignified race. The following analysis throws up some considerations on his final race weekend with a comparison with 2020 and shows how Rossi continued to be a racer up to the last sector of the last lap of his career.

Qualifying performance: thanks Pecco… but what a fantastic T3!

The Valencia weekend did not start very well, as Rossi was last in FP2 (we do not consider FP1 which was in the wet). The turning point came in FP3 where, thanks to his ‘protege’ Bagnaia, Valentino managed to pull out a 1’30.8 lap time which allowed him to grab that fateful tenth place that gains direct access to Q2. In qualifying then, he confirmed 10th with a decent 1’30.7.

In the following graph we can see how, compared to poleman Martin, Valentino was surprisingly faster in T3 despite being about 8 tenths down at the end of the lap. Rossi lost much of the gap in sectors T1 and T4, where he was more than 3 tenths slower on average.

But the real judgment, at least on the flying lap, should be done with the same bike. For this reason we made the same comparison, considering Fabio Quartararo's fastest lap (fastest Yamaha rider). Well, the Doctor managed to be faster than the newly-crowned World Champion in the last 2 sectors while losing a lot in T1 which, at this point, seems to have been Rossi's Achilles heel during his last weekend as a motorcycle rider. Below is the comparison chart between the two in qualifying.

Rossi's good performance is supported by the comparison with the fastest lap made in 2020 (for greater precision the best lap of that weekend, made in FP3, was considered), where the Doctor was still riding the bike with the official colours. The graph below shows us the comparison on the various split times. Once again, it is clear that Rossi made a big leap in quality this year in T3, being 3 tenths faster than 12 months ago. Far from negligible improvement even in T4, where he was 2 tenths faster than in 2020.

Race performance: 100% up to the last sector of the last lap!

If in qualifying Rossi was, at least in part, ‘helped’ by Bagnaia, in the race the Doctor put his whole self on the track, not sparing himself from the first to the last lap and finishing in the same position in which he started: 10th. The crash by Rins on the one hand and being overtaken by Bastianini on the other, meant that the balance remained at zero. Valentino did a race with a regular pace, with an average lap time of 1’31.9. The impressive figure is the delta between his best and average lap: only 2 tenths. Throughout the race Rossi always lapped between 1’31.7 and 1’32.0. In particular, from lap 21 to lap 27, always under 1:32. Morbidelli's post-race declaration was eloquent, he was impressed by the Doctor's pace at the end of the race and unable to attack him. The last lap of his last race still saw him lap in 1’31.820! Below a comparison with his "disciple" Pecco Bagnaia, the extraordinary winner of the GP.

Valentino Rossi ended his last career race 13.5 seconds behind the winner. If we go back 12 months, the gap he picked up in 2020 from the winner Morbidelli was 20 seconds.

By using himself as the tare, however, Rossi crossed the line 13.2 seconds earlier than in 2020, improving his race pace by almost half a second per lap! It must be said that the 2021 race was about 7 seconds faster than in 2020 where Franco Morbidelli won, but this does not in the least cloud Valentino's good performance.

Let's now have a look at a comparison between the various sectors, excluding the first and last laps as usual, comparing Rossi to both the 2021 winner Bagnaia and himself 12 months earlier. The half second per lap with respect to Pecco is distributed as we see in the graph below where, as in qualifying, the first and the last sector are particularly difficult for the Rossi-Yamaha package. The magic of Saturday in T3 was not repeated, while the gap in T2 is less than 1 tenth.

If we look instead at 2020, Valentino's improvement is evident in all sectors, with an average advantage of over 4 tenths per lap on the average pace.

In conclusion, Valentino Rossi's extraordinary career, studded with countless races won and podiums (we are not giving all the numbers here), was certainly not affected either positively or negatively by this last race but, while many observers were ready to bet on a final catwalk at a cruising pace, the doctor honoured his last presence with the best performance of the year at the level of race pace.

With a 1’31.820, just 1 tenth from his fastest lap, set on the last lap of his last race, thus concludes the career of the most successful MotoGP rider of the modern era