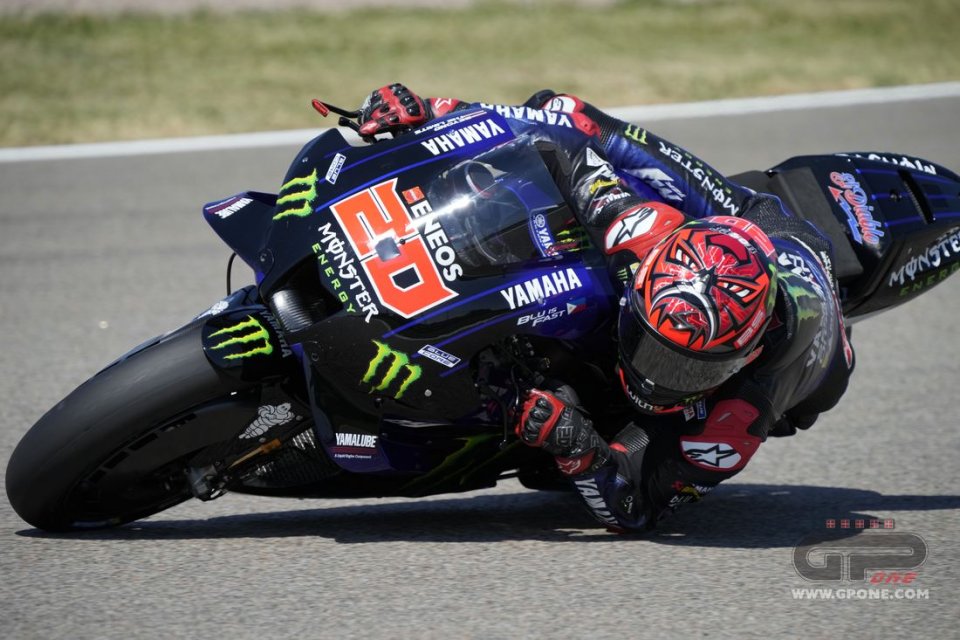 The Sachsenring weekend has started well for Yamaha, which placed Quartararo and Vinales in 2nd and 3rd place respectively behind Oliveira's KTM. Fabio is satisfied with his day, but not completely, because he knows that there will be a lot of rivals on Sunday.

"As far as the tyres are concerned, I must say that they are good, I was able to lap in some interesting times after more than 20 laps, having putting on in FP2 the ones I used in the morning, even if I cannot make a real comparison with the other riders - he explained - But my sensations on the M1 weren't too good today, especially at the front, and we have some ideas to try out tomorrow”.

"Miguel has taken a big step forward and so has the KTM - confirmed Quartararo - He seems to be very fast at the moment, fortunately he didn't have a good start to the season but from now on we will have to keep an eye on him".

The same goes for Marquez, who was the fastest on the track in the morning, while in the afternoon he finished the session 12th but without putting on a new tyre to find the time.

"Marc is very strong, in 2019 he made my life very difficult to try and get my first victory and I will do the same with him - the Frenchman smiled - He has had a very difficult period and we will all be very happy if he gets a good result, or rather we will be happy for him but not for us! Anyway, I'm here to fight for the podium and for the win, I’m not thinking about him ”.

However, from a championship point of view, he will certainly have a thought for the Ducatis who, as expected, are encountering some difficulties at Sachsenring.

“They said the same about me at Mugello and Barcelona, ​​that I would have struggled, however, apart from the problems, I went well - he underlined - I think they will fight for the podium on Sunday. It's true that this track is better for Yamaha, but I think it's more a question of the rider than the bike, it's the rider who can make the difference. Today Bagnaia struggled a lot, but I have to stay focused on myself, not on the others, because, as I said, I didn't feel so good on my bike ”.

One final comment was about the modification made by Alpinestars to his leathers in order to prevent other accidental openings.

“I have a double Velcro, in order to have double safety - explained Fabio – In any case we all know that before the race in Barcelona I had closed my race suit correctly, but what happened, happened. However, now I have this update and tomorrow I will try something new, again for my leathers ".