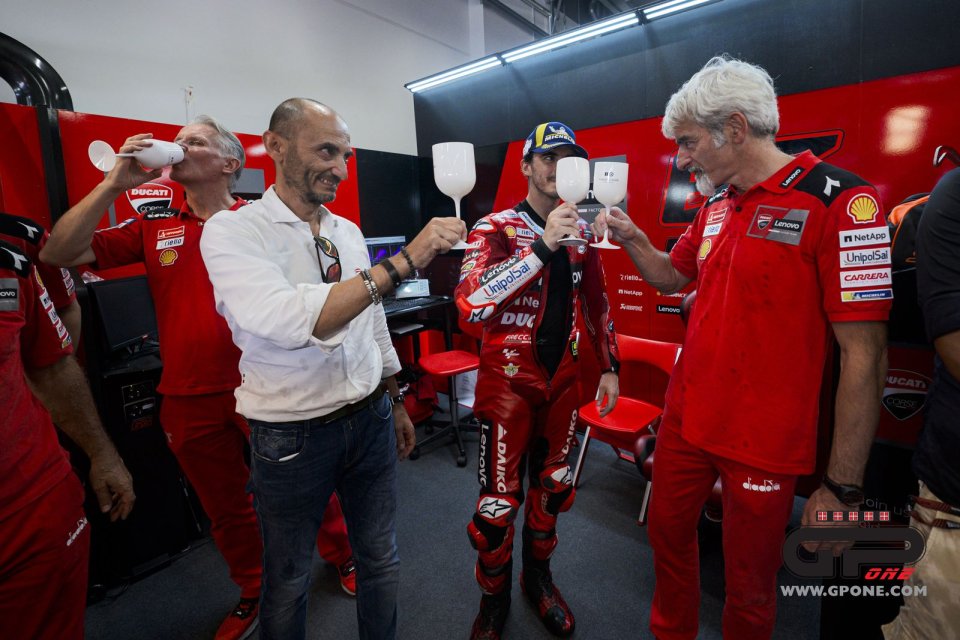 You all know the outcome of the race: Bagnaia won in a sprint finish by 34 thousandths of a second over Bastianini. It was a finale during which Tardozzi came close to a heart attack, Ciabatti's salivation level was zero, while Gigi Dall'Igna had visions of the last lap of the 2016 Argentina GP, when Iannone took out Dovizioso at the last corner while they were first and second.

Claudio Domenicali, who on the other hand is Ducati's Big Boss, did the last lap on tiptoe like Carla Fracci in Swan Lake at the Bolshoi Ballet.

I wasn't within range, unfortunately, so I can't swear that what I read on his lips when Enea locked up the front, coming close to a collision with the Turin rider was an invocation to the Great Harlot. But I don't think I'm very wrong.

After all, Bastianini is a racer through and through, he wanted to win, and after having pushed his opponent as hard as he could as – as he already did at Le Mans - hoping for an error that did not arrive, he loosened the reins on the Desmosedici's neck making it literally fly.

It was a risk that Domenicali did not like one bit.

“We talked to our guys and they know they don't have to be too aggressive with each other. I think Enea did well until the last lap, then that last lap braking move on Bagnaia was uncalled for as he took a big risk, we didn't like it," said the boss.

Pernat, manager of the Beast, on the other hand, liked the move quite a lot because his client demonstrated (but was there any need?) that he holds no one in awe and since Carlo in these situations shoots first and then asks "who goes there?”, while they were taking out the defibrillators in the garage, he chucked in another grenade for good measure: “Enea deserves at least half the victory prize money!”.

And that’s not the end of the joke.

Well, we have told you about the one that should make you think, because Ducati made the right choice by flanking Enea with Pecco, but it cannot and should not expect anything different in the races to follow and, above all, for 2023.

Bastianini will be Bagnaia’s first rival, on the other side of the garage, as it has always been in the racing world. They will both give their best, like Senna and Prost in McLaren, and they won't love each other just as Rossi and Lorenzo didn't love each other in Yamaha.

It will be a great rivalry, between teammates and no one should ever think about trying to play down a confrontation that we are eagerly looking forward to.