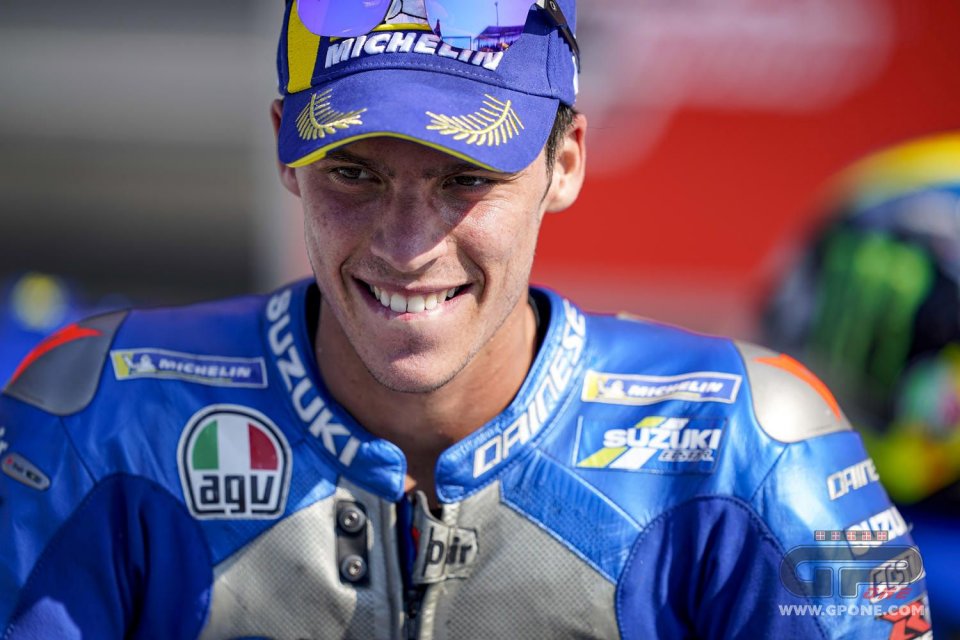 Joan Mir is on the crest of a wave at the moment in MotoGP, despite not having won his first Grand Prix yet, but a second place today has propelled him into the top echelons of the world standings which is looking more wide-open every single weekend. After seven races, in fact, the leader of the classification - currently Andrea Dovizioso - has only 84 points.

Suzuki’s Spanish ace has put together 69 points in the last four races and is currently just 4 points behind Dovizioso in the standings. A situation that few thought to be possible in 2019 and which instead is coming more and more concrete every race, making Mir one of the most dangerous riders in the chase for the title, according to an opinion shared by many of his rivals on the track. His robust move on Quartararo was magnificent, coming at exactly the right time and very similar to the one made against Rossi just seven days ago to grab the third place on the podium.

In the various meetings with the media after the race Mir is radiant, but he does not spare a dig at Fabio Quartararo, who has suddenly become one of his opponents in the fight for the world title.

"I didn’t see the dashboard in Austria at the first red flag in race 1 - said Mir - but only for one sector, because I saw it the next. There it was a red flag, so I didn't see the message on the bike, but I only saw the flags. Only there did something like this happen to me. You maybe don’t see the message in the first sector, but after that you should see it. Usually you look at the dashboard , it's strange not to see such a message. It never happened to me. "

Today saw another comeback for the podium, which is rapidly becoming your specialty…

"I'm really happy, I gave 100% in every single lap, I put everything on the table and it wasn’t easy starting from 11th on the grid. A lot of riders in front of me seemed to want to win the race in the first laps, it was risky. When I saw that Pecco, Maverick, Pol and Fabio were getting away, I tried to concentrate as much as possible to recover. I started to feel good on the bike towards the middle of the race and I was able to make up the gap to them lap after lap. In the final laps it was really fun to fight with these guys, I'm happy for second position. I can't wait to win a race, of course, but it's important to keep scoring a lot of points and stay in this form. "

"I never thought I'd find myself in this situation in 2020. After Austria, when I made my first podium and found myself being really fast, I had an injection of confidence, because when you get on the podium for the first time, you think you can do it again. It is really difficult to maintain this consistency, but it is our first goal for all races. We are very consistent and my idea is that Suzuki is the most balanced bike that works on all tracks. In the last three tracks I felt good, I did a click in my head after the first podium and this allowed me to start fighting for the podium everywhere. In the last few races I have been on the podium three times, but on two different tracks. Let's see how things go in Barcelona, ​​maybe I could get on the podium or even aim for victory there ".

How much are you missing not having won a race yet?

"I have no victories yet and this is my short-term goal. But in the meantime it is important to score a lot of points. In Austria I could have won, even here maybe I could do it with a good qualifying. So I think that when I improve in qualifying, I will fight for the victory. Maybe already in Barcelona. The important thing is to get on the podium when you can, as well as to get on the podium when it is within your reach. In my opinion, I couldn’t get the victory here.”

Do you feel you’re a real contender for the title?

"I think I'm fighting for the championship, even if I don't think about it too much. There are still too many points to be awarded, but it's true that halfway through the world championship I’m close, maybe I can even think that the season will start here. Four of us have almost the same points, let's see if we can maintain this consistency until the last race ".

You were behind Quartararo's Yamaha and Espargarò's KTM for several laps. Did you see what the strong and weak points of these two bikes are?

"When I was behind Fabio, I saw that the Yamaha behaves quite similar to the Suzuki, in braking and especially when cornering. With the KTM it is difficult to make this comparison, because at that moment Pol was in difficulty, his rear tyre was very worn on the left side, so I could clearly see that he was riding in a stop & go style to keep up with us "

You may not be the Saturday man, but you are certainly the Sunday man…

"Yes, maybe on Sunday I feel stronger than everyone at the moment, but not for the whole weekend. Fabio and Maverick are better than me in qualifying"