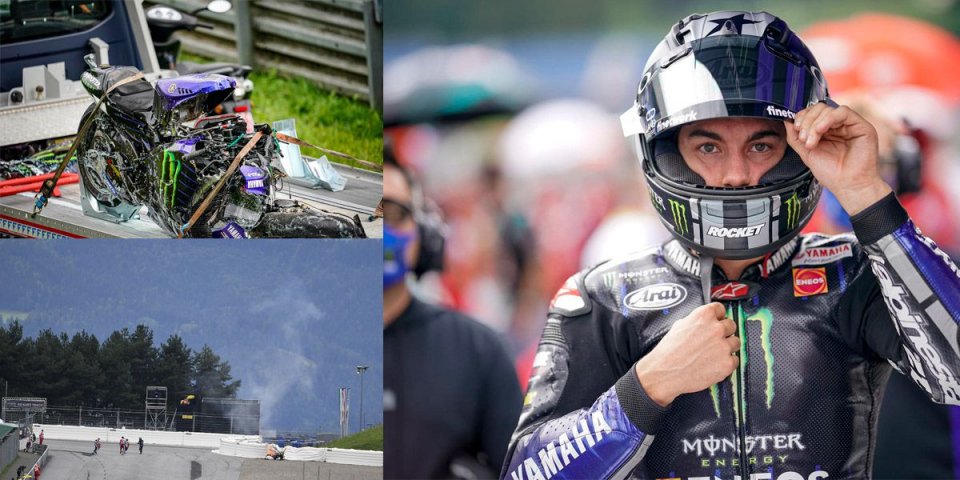 Maverick Viñales can truly breathe a sigh of relief after what happened at the Red Bull Ring. In fact, from a statistical point of view, it is almost impossible that another bad accident will happen to him in the next few months, given that in just seven days he risked big at least twice. In the first episode, he was just missed by the bikes of Zarco and Morbidelli. In the second, it was his M1 that betrayed him, leaving him without brakes.

Speaking to the microphones of Onda Cero's Transistor radio program, the Yamaha rider, however, wanted to clarify the dynamics of this second accident, also taking a good deal of responsibility for not having opted to stop in the pits when the situation was becoming complicated.

"In Austria we destroyed everything we could! - joked Vinales – They were two absurd weekends. In motorcycling there is a risk, we know that and I feel really lucky to have come out of it without being hurt or injured. These things happen, I know".

"It was all my fault. I didn't want to retire, I kept on lapping until the brakes abandoned me. In the end there were no pads, they had come off and I ended up without brakes. I should have stopped earlier. I wanted to score some points, to catch up in the standings ".

On one point, however, Vinales wanted to reiterate that he rejected accusations of not being responsible - creating excessive risks for the other riders when he opted not to pull in immediately.

"When I realized I had brake problems, I raised my hand to let the other riders pass me. I was behind Dovizioso and let him go, then Valentino and Quartararo arrived and the bike started braking again, but when it started to give me problems again, I let them go away from me. I would never put anyone at risk. "

The Yamaha rider also explained his decision to stick with the brake caliper he had already used before, without switching to the new model as Brembo had recommended.

"The previous weekend, I used the same system and it was perfect. I did a lot of laps behind other riders and I had no problems. Then I fitted the new calipers and in free practice I had problems, they worked well in some corners and then when I reached the downhill turn 4, I often found myself with little braking. They seemed unreliable and this from the rider’s point of view it is a big problem. So, I stayed with the choice of the old calipers and they worked very well, in FP4 it was very hot and the brakes never gave me any problems. Only in the race did they betray me."

"I didn't even have time to think, I heard a bang as if some piece had come off the bike. Then I said to myself 'you have to throw yourself off'. I burned my back a bit, but that's all, I was lucky ".

The wrecked bike represents an additional problem for Vinales, who has already used almost all the engines for the 2020 season…

"When I saw the red flag, I thought I'd try to retrieve the bike to take it to the pits. It was on fire, but I tried to grab the handlebars to pull it up and saw that the front was no longer there. I immediately thought 'the engine!'. I couldn't believe it. They'll try to save everything they can from that bike. If the frame isn't bent, they'll recover it, but the thing that really worries me is the engine. "

The season is not compromised, but certainly it becomes a steep uphill slope now for the championship…

"I have to continue to believe in it. Better to have made mistakes now than at the end of the year, I'm sure we will have good opportunities. Misano is a track I love. I think the most important thing to do is to be convinced that we can win. We knew very well that Brno and the Red Bull Ring would not be easy tracks for us, but they are behind us and now there are circuits where we can begin to have some fun ".