Carlo Pernat was once again with us in our usual Saturday afternoon appointment, taking stock of the situation in MotoGP together with Paolo Scalera and Matteo Aglio. We were live from the Mugello circuit, where the CIV is being held place and there was also a surprise intervention by Lorenzo Savadori, race winner with Aprilia. Many topics were discussed during an hour-long chat and accompanied by a lot of questions from the fans following live.

Obviously there has been a lot of talk about Valentino Rossi and the expected announcement of his confirmation in Yamaha Petronas for 2021, as well as the lack of a deal between Dovizioso with Ducati, which has not yet signed the contract with the only rider capable of facing up to Marc Marquez in recent seasons.

The first question concerns the possibility of Valentino Rossi of arriving in MotoGP with his team in the future.

“Valentino in my opinion will make his own team in MotoGP, I reckon that is almost certain, I'd say 99%. Before, I was absolutely convinced that he would have done it with Yamaha, while today I am less convinced also because of the new regulations regarding satellite teams from 2022, which say that each manufacturer can enter 4 bikes. What will happen to Petronas? He could also look elsewhere. In Suzuki there is Brivio, with whom there is a clear friendship. In Aprilia Valentino has his heart, he was born there. I would not be surprised that in the future either as a team manager, or as a coach, or whatever, I see a collaboration with Aprilia more plausible than with Suzuki. Of course, it will be necessary to see how the Aprilia will go. The new bike was born under a good sign, let us be clear about that, but it is just as clear that it still has small teething troubles, but that is normal. You have to understand how much budget Piaggio puts into developing the bike. It seems that because of the coronavirus they have some problems and I think that for Aprilia the best solution would be to completely separate the Aprilia racing department from the rest of the company. If it does not leave the group, I think it will have problems. In 1995 Aprilia went into crisis, but the fact that the racing department was separate allowed us to continue well even if Aprilia did not pay some suppliers and thanks to our victories on the track, we also managed to get the company back on track. I really make an appeal to Colaninno: he must separate the Racing Department from the rest of the group. With the men it has today, it will get the results. "

“In my opinion Valentino will not make any announcements, I think he will wait. This inactivity because of coronavirus has brought a halt to everyone, even Valentino. You have to understand the way things are, I think it will take a few races to decide. How many times have they said that they would sign soon and then everything has always been postponed? I think even in Yamaha they maybe want to wait a minimum amount of time”.

Another topic dealt with in depth was Dovizioso's failure to sign a deal for 2021. Pernat recognizes a recurring behaviour in the Borgo Panigale manufacturer regarding the management of the riders.

“I have managed riders and companies. When you want a rider you take him, you trust him, you talk well about him. Ducati has always been hard and demanding in all negotiations. Almost as if it were doing a favour for the rider, in my opinion that is not how it should be done. I go back to when Ducati decided between Iannone and Dovizioso. If you remember, Iannone, who was the chosen one, refused because of the money. With Dovizioso it took them 6 months to renew the deal. Was money the problem? For me then the accident he had does not change anything, I think Andrea is fine. Of course, it would have been better not to have crashed, but I think nothing changes. Negotiating a deal is always a matter of trust. If a manufacturer believes in a rider, maybe the rider settles for even less. If the rider does not feel confident, he just wants the money. What has Dovizioso ever done to hurt Ducati? He has finished three times second; it might be OK that there are engineers who are convinced that they have the best bike of all, but they made a big mistake when they got rid of Lorenzo. In my opinion Marquez in 2019 would not have won with Lorenzo in Ducati, I’m sure about that. "

According to Pernat, Ducati have excellent abilities in choosing the riders, while they have always had problems confirming them.

“At Ducati it seems that they are good at choosing the riders while they have some problems keeping them. Usually it goes the other way round, while they have signed many incredible riders, such as Stoner, Bayliss, Capirossi, Lorenzo. Imagine what a team they would have had in Ducati in 2019 with Lorenzo and Dovizioso ".

Looking at the other riders, Pernat points out the potential surprise of the season in Vinales.

"I would bet my money on Vinales this year, because in my opinion he has now got rid of the psychological shackles of Valentino Rossi. He feels like Yamaha's leader, he is motivated and now he is at 100% in my opinion. The rivalry with Quartararo is really different. Fabio has yet to learn how to paint-swap in the last few laps, when he also learns this, he will be a complete rider ".

Regarding the decision by HRC to sign Pol Espargarò, Carlo has a very precise idea.

“I think Honda has understood that it cannot make a motorcycle just for Marquez, only for one rider. This is because if Marc gets hurt, Honda basically just disappears. Alex's contract was a bit of a scam in my opinion. Honda went for Pol Espargarò because in my opinion he did a great job of development with KTM, he had experience in the development field. Pol is strong, I am convinced that we are talking about an interesting operation for Honda. "

A comment was also dedicated to the story of Quartararo test-riding a Yamaha R1 with SBK specifications.

“If we arrive at the levels of what they do in Formula 1, we will ruin ourselves. These are things worthy of that championship. Quartararo had also posted photos of the bike on social networks, so he did things in good faith. Someone spied on him, of course. It’s utter stupidity to think that things like that can help. " 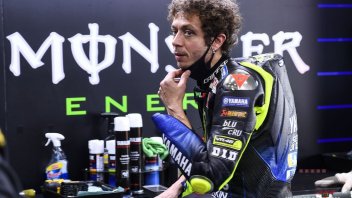