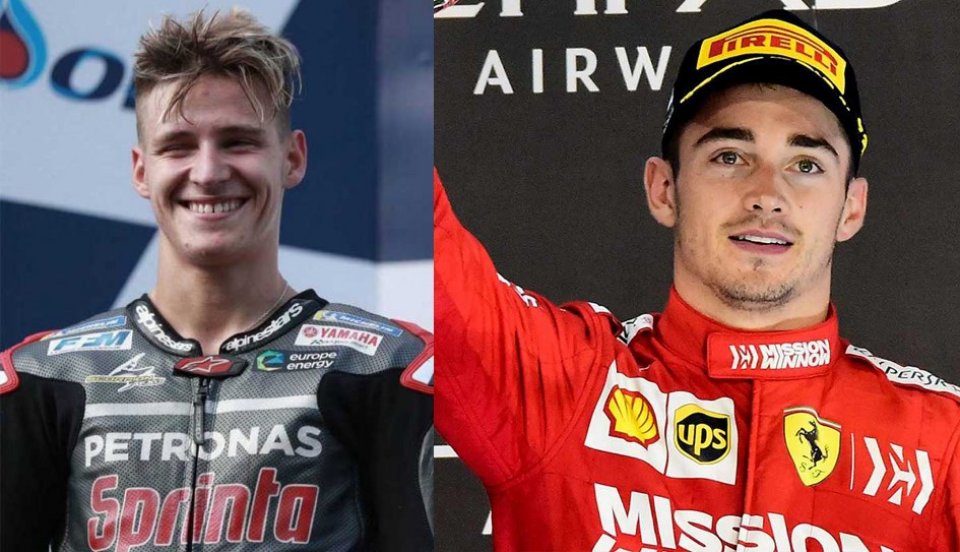 He had been talking about it for a while, and the confirmation finally arrived. Charles Leclerc signed an extension to his contract with Ferrari and will remain at the helm of the "Rossa" in Formula 1 until 2024. Ferrari confirmed it with a tweet.

Five years is a devil of a reconfirmation for a 23 year old, and even if he's a sure promise, it does take some courage - on both sides - to sign such a long agreement.

Why talk about it? Certainly, not to give you the news of this early renewal, since his contract would have expired in 2021, but only to make some observations relating to the world of car racing.

Leclerc arrived in Ferrari in 2019 and, in his first year, he already has two victories, seven pole positions, and 10 podiums under his belt.

An interesting outcome and, in a sense, comparable to that of Fabio Quartararo with his two second places, 7 podiums, and 6 pole positions this year. Of course, he hasn't yet won a Grand Prix, that's true, but with the Petronas satellite team's Yamaha, he finished 5th overall in the World Championship, just 19 points behind Maverick Vinales, the first official rider on the team from Iwata. And all this with five zeros in the standings, one more than Maverick.

Is Fabio doing the right thing by signing an extension to his current contract, binding him to Petronas, if Yamaha would then end up wanting him on their official team?

The answer, as far as we are concerned, is no. Unless his only interest was to secure a multi-million-dollar contract. In fact, the real investment for a rider are the results and the possibility of having a competitive vehicle.

Now, if Ferrari is happy to have secured a promising young talent, we should note that, in recent years, it hasn't exactly been the best car in the championship. The same could be said for Yamaha. Its last title dates back to 2015.

Then there's another consideration to make: among early signatures and very long-term contracts, the market risks becoming paralyzed. And what could happen to a young rider if, after such a long period of time - let's say without great results, if not for a few victories - decides to get back in the game?

We have an example of the wrong choices made right before our eyes: Johann Zarco. From Yamaha satellite to official KTM, to find himself again in a second level team, having to climb back ti the top.

The agreement signed by Charles Leclerc offers us another topic for a final observation: when Phillip Morris wants a driver, they almost always manages to succeed. And if the only choice for Ferrari was the driver from Monaco, with Lewis Hamilton in the same situation as Marc Marquez with Honda, we don't think the situation can be replicated in the MotoGP, where an entire generation of young riders is pressing to get on the official teams. And, coincidentally, the team with the (economic) cards in hand, and the same team color as the Ferrari, is the Ducati.

In no time at all, we'll be forced to do without Valentino Rossi, Cal Crutchlow and, perhaps, Andrea Dovizioso if he doesn't renew with Ducati at the end of 2020.

As is written in Ecclesiastes: "A generation goes, and a generation comes ..."
And we could also add: bringing many opportunities along with it. Including that of a top team which, very shortly, will be called to entirely reshuffle its cards.

The McAMS Yamaha rider achieved the best time at the end of FP1, with a gap of more than eight tenths on his opponents. Fourth position for Ryde,...
11 sec ago

The grid line-up for the second heat will be based on the results of the first. Granado leads the way on Friday at Misano with new track record,...
6 hours 5 min ago

The Australian is the latest acquisition of the KTM GP Academy: "In the team of my dreams, together we can do some amazing things"
2 days 8 hours ago

After his shoulder injury, the British Stock 1000 champion will be back on track this weekend at Oulton Park with Stuart Hicken’s team. Farmer will...
2 days 13 hours ago

“It was not possible to continue. I could’ve damaged my arm. I haven’t changed my mind about my future. Aprilia could be an option.”
5 days 12 hours ago

The reigning champion took his third victory in three participations, relaunching himself in the standings. Runner-up Simeon, 3rd Aegerter who...
5 days 12 hours ago