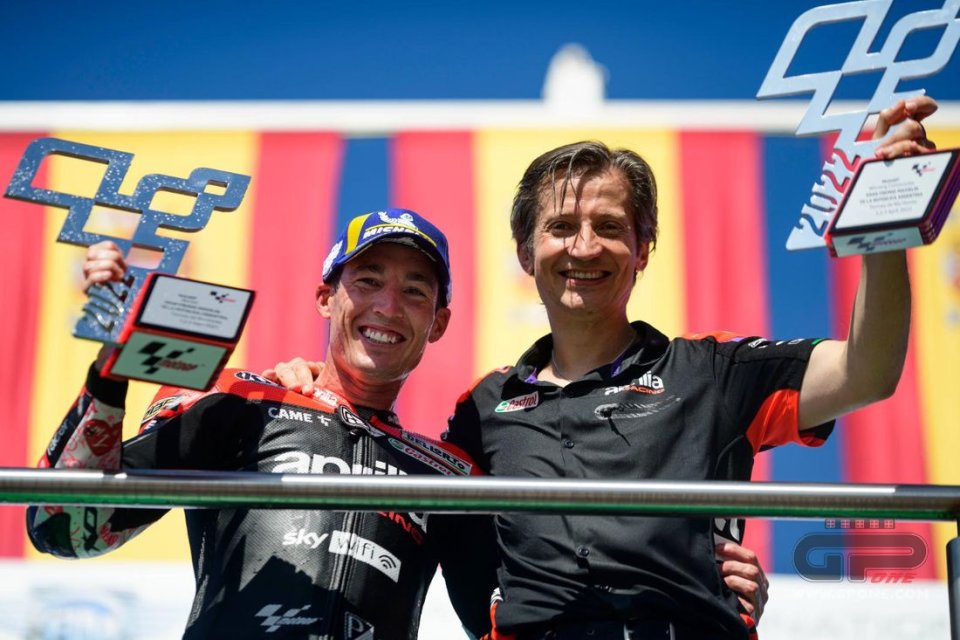 Four races from the end of the world championship, Aprilia and Aleix Espargarò are still in contention for the title, just 25 points behind. Almost a miracle if you consider that last year the Spaniard finished the championship in eighth position, 158 points behind the winner.

In 2021 Aleix's best result was a third place at Silverstone, with five zeros to his name, this year 'the Captain' has only made two mistakes: when he celebrated too early in Barcelona, ​​cheering a lap before the chequered flag, missing out on a second place but fortunately finishing fifth and last Sunday, at Motegi, when blamelessly he found himself with an alignment lap map that forced him to change bikes. An error (not by him) that eliminated him from the points. This without counting the innocent ramming by Quartararo in Assen, from which Espargarò magnificently saved the day with a fourth place after an incredible comeback.

Victory in Argentina, four consecutive podiums at Portimao, Jerez, Le Mans and Mugello, and another third place in Aragon have taken the veteran to where he is now. One step away from the title, but little is said about him, very little indeed. Massimo Rivola, CEO of Aprilia Racing, however, is in a good mood and happily answers all our questions.

Rivola: "Honda copying us? The balance has reversed between the Far East and Italy"

In the Misano tests we saw Honda with a fairing inspired by the one on the Aprilia, Yamaha went poaching for Marmorini in F1, as you did before: what was the satisfaction of having opened a path that your rivals are following?

“I had known about Luca for some time, we had talked about him. Obviously it gives me satisfaction, it makes me think that the balance has reversed between the Far East and Italy. But it made a certain effect to see Honda test - let me say - a bit late, it is the sign of a manufacturer in difficulty and I feel bad about it because I have a lot of respect for them. In the world championship we have witnessed the withdrawal of Suzuki, which no one has yet digested, and now we see Honda in this situation. Fortunately, in Japan there have been important declarations from the Honda bosses who have guaranteed that they will continue to believe in motorcycles in the future too ”.

MotoGP is changing, Honda has announced a major investment in electric, Suzuki has pulled out, there is a crisis in the number of spectators and a lack of true personalities. Is the Sprint Race enough to liven up the championship? F1 managed to do it, but its leadership changed with the arrival of Stefano Domenicali.

“To say that I am relaxed about everything, no. Today in terms of ratings, F1 is beating us. The turning point was Netflix's 'Drive to Survive' TV series which gave it a lot of popularity. We tried but we were less effective. In F1 they have a much more wild and effective use of social media networks and their drivers, Leclerc, Norris, are the new generations and they make good use of this aspect. It is also true that F1 attracts a lot of personalities, at Monza this year, I met Sylvester Stallone and other movie stars ... but it would be wrong to copy F1. Of course, the Sprint Race is a stopgap measure, but also an opportunity to make people talk about us. I hope it works. Are personalities missing in MotoGP? Fortunately, Marquez will be back, and in a great way, as we have already seen at Motegi, we have personalities, Quartararo is one of them. As for us in Aprilia, it is true that they are not Italian, but Espargarò and Vinales are two great personalities ”.

Does Dorna help or prevent this growth? They are self-referential, and motorcycle racing is lacking mainstream media, newspapers, public TV, radio, to reverse the trend. What are the manufacturers doing to improve this situation?

“As a manufacturer, our interlocutor is Dorna, we encourage it to make certain decisions, then it is true that… I don’t want to criticize, but as you said, F1 has made important changes. They were good but also lucky, they changed the rules for performance, but MotoGP does not have these problems, the riders are all very close. It is not even a matter of the show, even though about the Japanese GP I heard conflicting voices… some thought it was great, others didn’t. Perhaps something could be done by reducing the aerodynamics, by increasing the braking distances there would be more overtaking. Apart from the change of format, I don't know if we are effective enough ".

Are the current organizers an extremely change-resistant counterpart?

"We must not confuse what is perceived in Italy or in the world: we will go to Kazakhstan and India, these are important signs that which means that MotoGP is seen as a show not to be missed "

Of course, but F1 with its 24 Grands Prix now has its main focus outside Europe. Car manufacturers have enormous potential, can the world championship afford to stay out of Europe for so long with less wealthy categories like Moto 2 and Moto3?

"Absolutely not. The economic power between the world of cars and that of motorcycles is not the same. But there are countries like Indonesia where motorcycle racing is growing rapidly ... we have markets in the world that are asking for us. On a romantic level, the European races are wonderful, if I think of how sad Mugello, which I am particularly fond of, is without spectators my heart cries. We need to bring in more people. However, we cannot afford the prices of F1: we must make an effort even at the expense of a lower income ”.

Rivola: "the rules are poorly written and controlled worse"

At the beginning of your MotoGP career, as a former Ferrari man in F1, you were seen as a troublemaker, we still remember the fuss you caused in Qatar with the controversy over the 'spoon'.

“But we forget one important thing: all the constructors came after me, except Yamaha who didn't want to commit, but it was a strong signal. My message was: the rules are poorly written and controlled worse. If we don't put checks on the rules and put limits on aerodynamics, the spectacle could change even if the bikes become safer. I was not wrong ".

In 2022 Aprilia is fighting for the world championship, so the pressure and expectations will be higher in 2023. Are you ready?

“Of course we have to be and me first of all. Our expectations and those of the riders are important and it is always the first thing that creates pressure. Since this year we have been so close, tomorrow the expectation will be even greater, but if I look at the situation in an objective way, perhaps losing the concessions is not so dramatic. Rather than looking at what KTM is doing, which has hired technicians and now also a rider, Miller, from Ducati, if I look at Yamaha with a Marmorini-reinforced engine, I feel bad. Because Quartararo will be stronger next year and Morbidelli will come back strong. Honda for its part will be able to count on Marquez, while Ducati is already very competitive and will still have 8 bikes… it will be very tough. Probably consistency and making no mistakes will pay, both on our part and on the rider’s part. We and the riders will need to grow, and with four bikes on the track we will improve faster thanks to experience, we will have more feedback to grow faster. Ducati's growth is also the result of all the data to be analysed ”.

Come on, some of Ducati's competitiveness is thanks to you too: you gave them Dall'Igna ...

"Not only him, there are many more of us in their ranks"

The first episode is HERE.