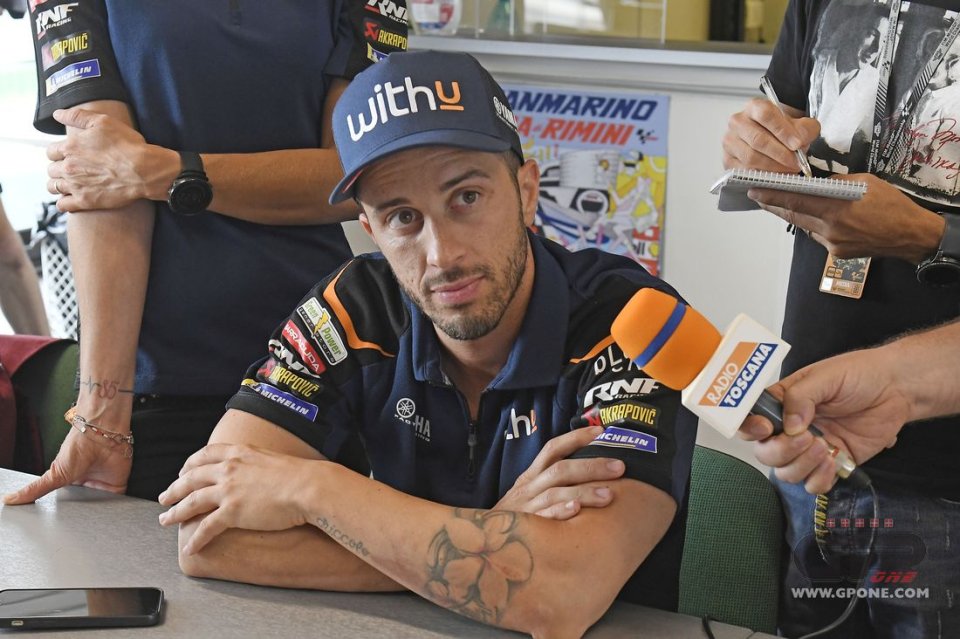 The time for the final farewell is approaching. Andrea Dovizioso has set foot in a circuit for the last time as a rider. A few more days, then he will start his second life. "Until this morning it was a race like any other for me, then you ask me all these questions and I'm realizing it will be my last weekend - jokes Dovi - Honestly, I am very pleased to finish my career where it started: I did my first race with a high-wheeled bike here at Misano, in 2000 in the Aprilia Challenge which I had won. All my friends and fans will be here, it's the right place. I know it was a bit of a particular choice to finish in the middle of the season, but in my opinion it was the right one. "

Your first victory in Italy in MotoGP was in 2017 at Mugello, then in 2018 you won here at Misano. What meaning did they have for you?

"Winning at Mugello was spectacular, special, that year I fought for the championship. The one at Misano the following year was fundamental for me and I think it was one of my best races, perfect, I was the fastest of all and that hasn't happened to me many times in my career (laughs). Getting on the podium here and seeing all the fans below was priceless”.

What will you miss most about MotoGP?

"The attention that there is on the riders of the world championship is something big, we are lucky. From Monday it will change”.

With you ends a generation of riders: Valentino, Lorenzo, Pedrosa, Stoner ...

"I'm the last one, it has an effect but it's a normal transition that is part of the game. It was a problem to have been in the world championship with all those champions, they made me spend many sleepless nights but they always encouraged me to try to improve myself. I never gave up, I worked well and the people around me helped me a lot”.

Who was the toughest of all your rivals?

“I've had so many and at different times. We start from Simoncelli, then Lorenzo, Pedrosa, Stoner, Valentino and Marquez arrived, they were the greatest. It has always been complicated with everyone”.

Who did you learn the most from?

“From everyone and a lot. I've always tried to study them a lot, you can't copy a champion but you can try to understand what they do and it was very useful. Each has his own characteristics”.

Will you get emotional after the finish on Sunday?

"As you get older you become more sensitive, maybe it can happen (laughs)".

Are you ready to leave MotoGP?

“On Tuesday morning I will do the tests, but it will be a surprise. I don't want to reveal anything to you”.

Would you be a rider’s manager?

"More a sporting director because in MotoGP the preparation of the riders is increasing a lot, but in my opinion there is still room to work on many aspects".

How will you approach this weekend from a technical point of view?

"This is the only downside (laughs). I'm not as competitive as I would like, I’m struggling and I’m not enjoying things as much as I would like on the bike. Getting into the top 10 would be a nice dream”.

What if it rains?