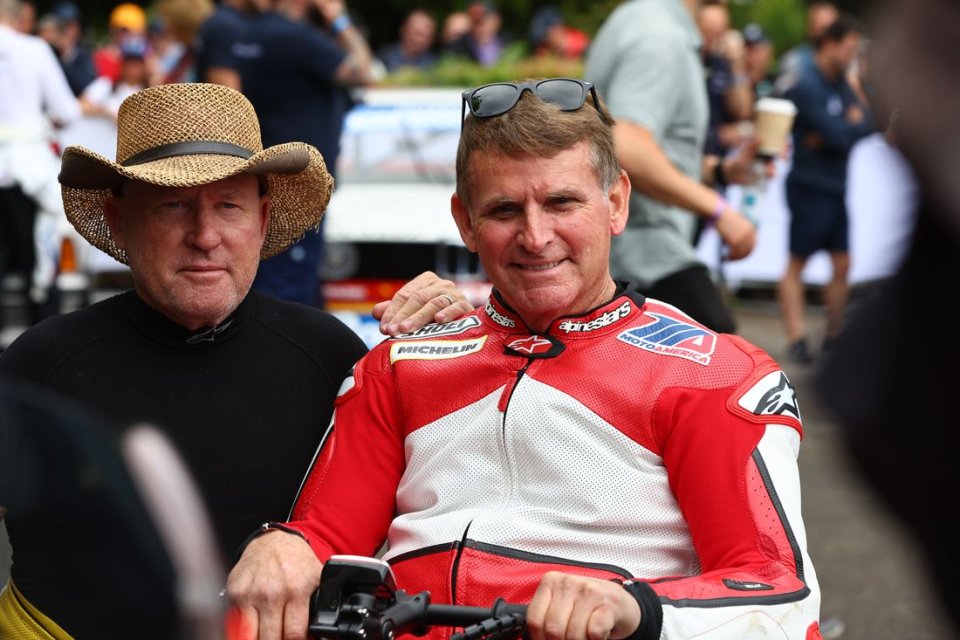 Wayne Rainey climbed back onto his 1992 championship winning YZR500 in a thrilling performance at the Goodwood Festival of Speed. It was the first time that Rainey, who was paralyzed from the chest down in an accident at Misano in 1993, got back on a racing bike after the accident that ended his career.

Wayne tackled the famous climb aboard a specially modified version of his YZR500. The bike was adapted by Yamaha's engineers in Japan, who modified the gear shifting system so that Rainey could change gear via the left handlebar controls.

After a private test session earlier in the week, Rainey climbed the hill for the first time to applause from the public on Thursday, alongside his compatriot, Yamaha champion and Marlboro Yamaha Team Roberts boss, Kenny Roberts, and former rivals of the 500 era Kevin Schwantz and Mick Doohan.

“I was quite nervous about riding the YZR500, as when I rode the R1 it was all quite straightforward as the bikes these days have so much electronics on them but it’s a bit different with a 500cc Grand Prix bike! – he said - But, to be honest, it felt like an old friend. It was always a challenge to race the bike at that level, fighting for race wins and championships, but being here 30 years later, being able to get on the bike and ride it up the hill in a nice, easy gentle setting is fantastic. The bike was there for me back then and it’s there for me today, so I’m thrilled.”

“I didn’t know what to expect,” he continued. “I couldn’t really go there as I had no idea what it would feel like but when I put my helmet on and they started the bike, I was like ‘it’s on!’. Being able to ride up the hill and through the corners, looking down and seeing that I was on my Grand Prix bike again after all those years felt like I was in a completely different world, and to do it alongside those guys, Kenny, Kevin and Mick, I could not have asked more than sharing this experience with them. A huge thank you to the Duke of Richmond for having me and to Yamaha for taking the bike out of the museum and adapting it for me to ride.”