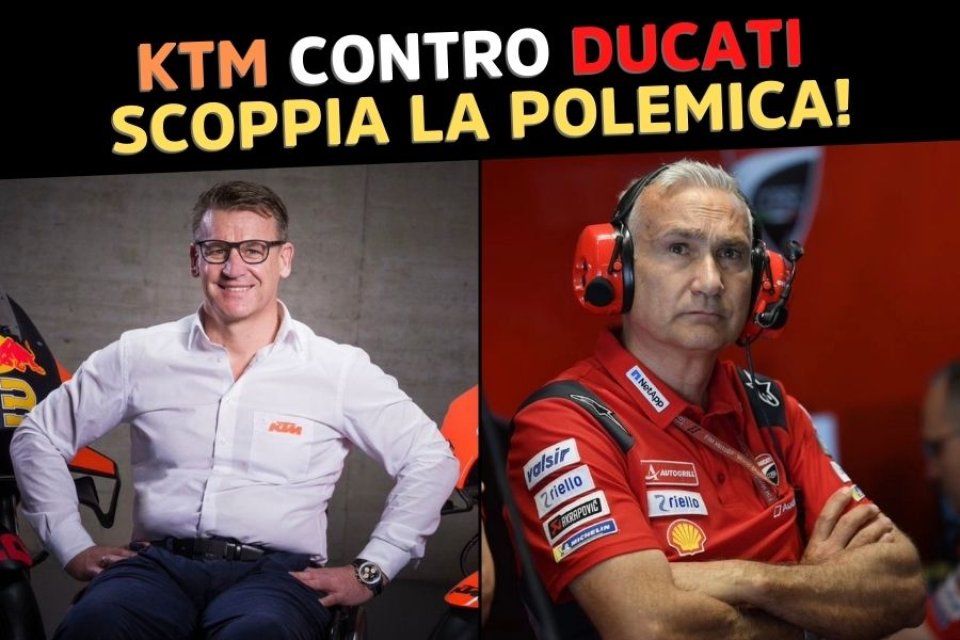 Interviewed by our colleagues at Speedweek, the sporting director of KTM Pit Beirer wanted to draw attention to and underline the commitment of the Austrian manufacturer in the promotion and search for young rider talent. All this stems from some declarations made last year by Davide Tardozzi, Ducati team manager, on KTM’s alleged "unlawful supremacy" in hiring young riders through the Red Bull Rookies Cup, already tying them to the brand by means of gag contracts.

“First of all, we don't make gag contracts. I don't know what he ate the morning he made those declarations - said Beirer - but if Mr. Tardozzi claims that there is unfair competition, I can only warmly invite Ducati to get involved in the young rider sector, I don't remember seeing a Ducati Moto3 motorcycle".

The question of Ducati's entry into the minor categories has been addressed several times even by Gigi Dall’Igna, who was absolutely in favour of it. At the moment Ducati is taking part as a factory manufacturer in the MotoGP and Superbike championships and from 2023 will supply the bikes for the MotoE World Cup. KTM, on the other hand, participates in a large number of championships: from CEV to Moto3, from MotoGP to Supersport 300, not to mention off-road where the Austrian manufacturer is present in almost every competition.

“The cost of our young rider program is relatively high; we are talking about millions of euros. Apparently at KTM we are such decent people that some riders sign voluntarily contracts with us for the Moto3 world championship after three years in the Rookies Cup, to which we supply only the bikes, without any contracts with the riders. Ducati now regularly draws riders from Valentino Rossi's VR46 Riders Academy, it's smart and clever. But they should just do it without complaining about our elaborate young rider program ”.

In short, there is a controversy between Ducati and KTM on the issue of young riders, in a period in which the motorcycle rider transfer market is still at a standstill but something is already brewing for a real revolution in 2023 (HERE ALL THE SCENARIOS). It is said that in war and in love everything is permissible, maybe it is also permissible in business, but not according to Beirer

"We had Jorge Martin race for two years in the Moto2 championship with the Ajo team, giving him the opportunity to join us in MotoGP in 2021, but he wanted to go to Ducati and paid a penalty of 80 thousand euros, even though his salary with us was much higher. We fought for Martin but he left anyway, I leave it to Ducati to judge whether this move was a decent or indecent action or not. "