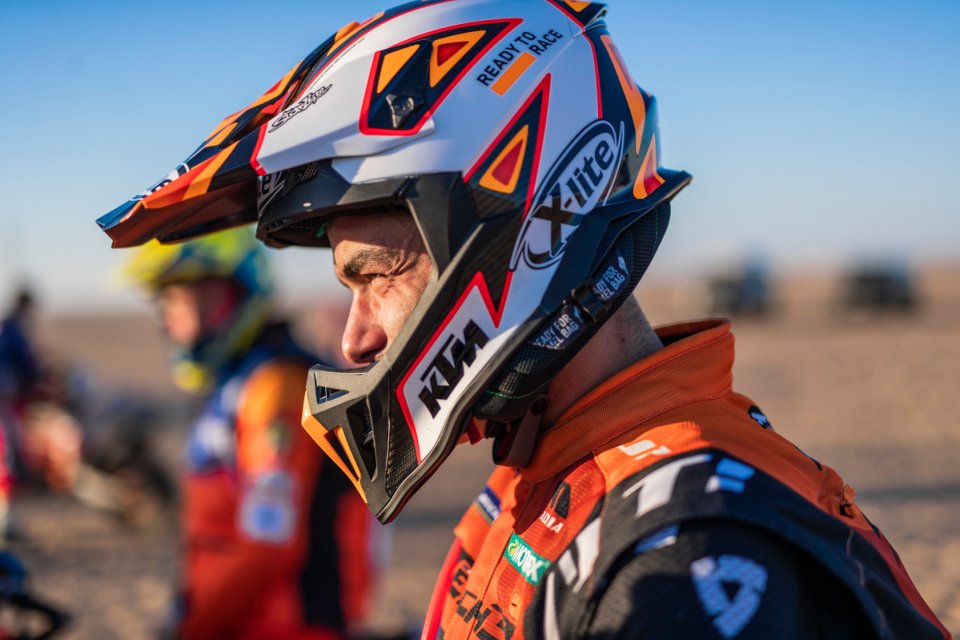 It is becoming clear that Danilo Petrucci's debut in the Dakar is going well beyond the rosiest expectations. Petrux was to have taken part in the event merely for the simple pleasure of doing it, enjoying a gift from a KTM that is clearly trying to earn some sympathy after the way it had left the Italian without a ride in MotoGP. But Danilo is not satisfied with just making up the numbers and his results in the early days of the desert classic have been impressive.

Bad luck lent a hand however and currently Petrucci is not in contention for overall honours after having a problem with the bike that forced him to play a wild card, but this does not in any way alter the importance of the results he is obtaining and above all it is enhancing his innate ability to adapt to the many pitfalls of the Dakar. Underlining the incredible performance of the KTM rider was Heinz Kinigadner, two-time motocross world champion and currently consultant of the Austrian manufacturer, as reported by our colleagues at Speedweek.

"Danilo Petrucci rode incredibly in the fourth stage. He made the rally aces look a bit ridiculous or ashamed on Wednesday"

Strong words indeed, but more than justified by what Petrux is doing in the desert. His performances are so exhilarating that you begin to wonder. Danilo has always been a huge off-road enthusiast, a specialty in which he raced as a boy before trying his hand full time on the track. He continued to train in motocross and certainly never lost his edge. Yet it must be considered that preparation and above all experience in rallies are essential to emerge and Danilo is doing everything directly on his event debut.

On the one hand, it is easy to think that Petrucci is such an eclectic rider that he can even emerge in a specialty that is so different from the one in which he has raced in the last ten years. On the other hand, of course, you have to wonder about the actual worth of the current riders taking part in the Dakar, who must have been shattered by Petrucci's performances.

The truth is probably somewhere in between, as always. Danilo is obviously gifted with an incredible natural talent for off-road riding that he has never fully expressed for the simple fact that he has never actually raced in this specialty on a professional level. On the other hand, his performances are inevitably bringing down the average level of the riders involved in the Dakar, who despite being able to count on more specific experience, have often failed to keep up with a truly outstanding Petrucci in the first stages.

What he is doing at the Dakar will undoubtedly also help to entice KTM for the future, because Petrucci at this point could become a true professional in the specialty and dedicate himself to it in the future, perhaps after having tried the experience of MotoAmerica on the Ducati in 2022, a scenario which looks like it’s really going to happen.