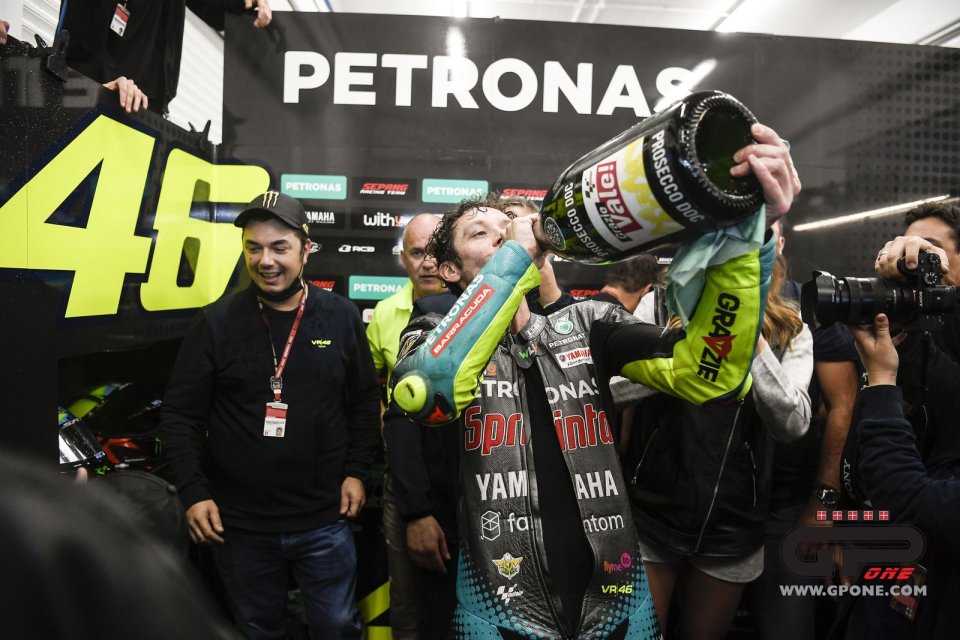 And so it was time to face the final curtain, which include hugs, fireworks and 75,000 crazy spectators. A yellow tide for the final tribute to Valentino Rossi, even when the colour of the team gear is different. Fans, riders, all the people in the paddock made the Doctor feel their warmth at his last race. There were no tears, "maybe I'll cry tonight alone, then I'll send you the video," he joked - but the emotions were powerful. A great career needed a grand finale and so it was, as in every self-respecting masterpiece.

“In the past few days I thought that today I would be sad and desperate, but I enjoyed it. And a lot. I'm a rider and I've always been a rider, it's the thing that gives me the most pleasure and I did it right to the very end", he began to put together the pieces of an unforgettable day.

So are you surprised?

“It was a really special weekend and I didn’t expect it like this. I was a bit worried about the last weekend of my career because you always think on this moment for a long time and you don’t know how you will feel, or if you are able to stay concentrated on the race, and also if you are sad. But it was a great weekend from Thursday. I received a lot of surprises, from the bikes of the championships, and also my riders using my helmets.”

A Grand Prix that started well and ended ...

“Especially it was a great weekend already from yesterday, I rode well and today in the race I was able to arrive in the top 10. So, it means I close my long career with the top 10 riders in the world. This is so important for me, it means a lot, and I can use this result for a long time because I can say in my last race I finished in the top 10. After I made a big ‘casino’, as if I had won a title, I won’t forget this day. Pecco helped me to stay in the top 10 and go directly to the Q2 and start in the top 10. Today I rode very well, I never made any mistakes, and I gave my maximum from the beginning to the end.”

So you never lost heart?

"This has been a long and difficult season, at the beginning crucial for me because I had to decide whether I would continue or not, but the results did not come. After announcing retirement it is easy to give up, but the team supported me. After Portimao I told them that in Valencia I didn't want to finish last and I think I had my best race of the whole season ”.

What did you think on the last lap?

"I tried not to think it was the last one, I did it for the whole race and it was a great psychological test. I focussed only on riding, on being in front and I really enjoyed it. I had Morbidelli behind me, I knew he wanted to screw me over, but now I can always tell him that as long as I was on the track he couldn't beat me (laughs) ".

You've had so many tributes these days, which one was your favourite?

“Seeing all my bikes was nice, and so was hugging all the other riders on Thursday and again today after the race. But the surprise that pleased me most was seeing the Academy riders with my helmets, it was a great idea. "

And the shirt you received from Ronaldo?

“He is my idol, for me the best sportsman outside of motorsport. I used to go to San Siro to cheer him on, I think he gave me the same sensations that I gave to my fans. He made me understand what it feels like to be on the other side ".

Bagnaia won wearing your helmet, who will be your heir?

"I am a big fan of all our Academy riders and next year we will have four in MotoGP. Bagnaia, but also Franco, will be able to fight for the title next year, I hope the next superstar will be one of them ".

Looking back, don't you have any regrets?

"The only one is that it's over, it will be more difficult for me in the next week, in the next few months, in March when the championship starts again and I will not be there. I can't complain about my results but, if I had put the same commitment and effort as the last 10 years into my early career, I would probably have won more. When you are young it is normal that this is the case, there are things you learn with age ".

If you could go back to the past, what would you change?

“I would return here to Valencia, but in 2006, I would face that race more prepared and concentrated, maybe I wouldn't have crashed. But above all I would go back to 2015, that time I did everything I had to, I lost through no fault of my own and this hurts even more. It is my biggest regret, because the defeat in 2006 is acceptable, it is normal to lose after so many victories, the title in 2015 would have been more important, I would have reached 10, it hurt me. The rest was all fantastic ”.

Can you describe your career in three words?

“Above all fun, then amazing and very competitive”.

What do you expect from your future?

“On the one hand, I'm happy to have more free time and to continue to be a racer, I hope I like the cars as much as MotoGP. Then I will become a father and I will tell you how I will feel when it happens ”.