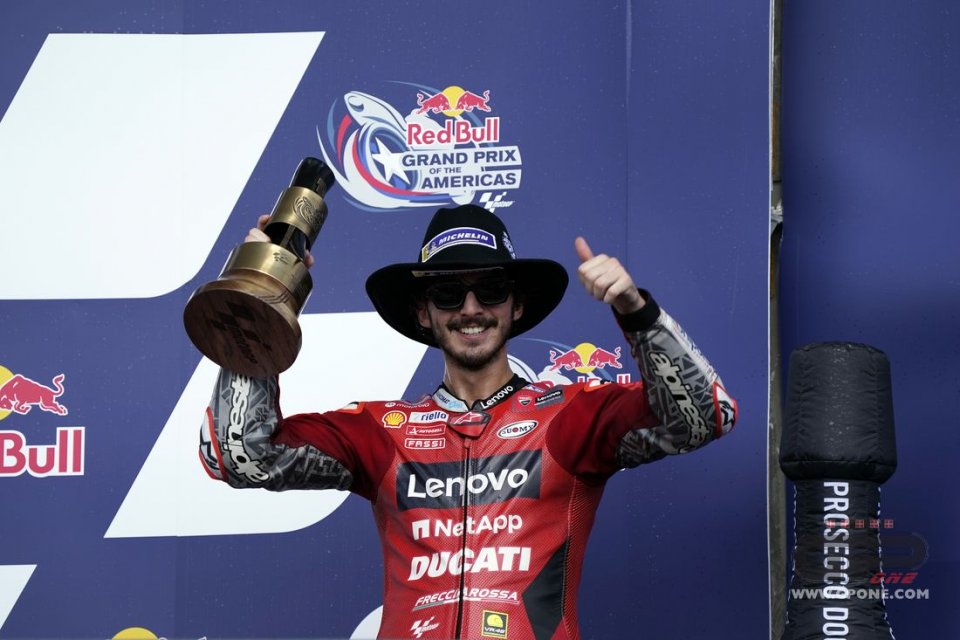 Bagnaia is trying not to lose heart, but he knows very well that third place at Austin, behind Quartararo, has virtually wiped out any hopes of him winning the title. With three races still remaining, the 52 points that separate him from Fabio are a wall that he will hardly be able to climb, unless something unexpected happens. Despite this, he can leave the United States knowing that he did everything he could.

“I don't want to be down in my morale, you have to be happy when you gave everything - he said - My potential today was this, the others were better. Marquez was untouchable and Quartararo very fast ”.

Is it time to give up?

"I certainly won't give up, but Fabio has done a great job this year: he was the fastest in the first part of the season and the most consistent. I know very well where I lost the points that I am missing, due to my mistakes and problems, it wasn't today. But in the last few races I have been more competitive ”.

At Misano Quartararo could wrap the title up, do you feel the pressure that you have to stop him?

“I am here to try to cut the gap, even though I know it is almost impossible. From this point of view, I think I'm calmer than Fabio, he has to think about the championship, I just need to be more competitive. I will certainly not take risks like Aegerter did in MotoE with Torres, also because I am not 7 points behind him, but more than 50 ”.

Why did you struggle so hard at the start of the race?

“I felt the rear tyre was not ready, maybe it wasn't perfectly in temperature, so I waited for it to work at its best. At that point I saw that Marquez and Quartararo were very fast, while other riders were pushing too hard. I waited for them to go into crisis and then I started pushing. I have to thank Miller for letting me through, he did great team work and it made me happy ”.

The last battle, for the podium, was with Martin.,,

“I didn't risk too much, when I saw that he had cut the chicane I knew he would be penalized”.

Did you suffer physically?

“It was as tough as I expected, but concentration in the race helps. Of course, the first time I looked at how many laps were left and I saw that it was 13, I thought: oh no, that's too much (laughs). Then I got my concentration back. From my point of view it was harder than in Malaysia, the heat was the same but this track is more tiring ”.

What do you think of Oncu’s disqualification for two races after causing the accident in Moto3?

“It is not the first time that we have seen manoeuvres of this kind in Moto3, Rodrigo did the same in Barcelona, ​​fortunately without consequences. Fortunately, on this track the straight is very wide, the walls are quite distant and nothing happened. They did the right thing to give him this penalty, it's the only way to start changing things, but we have to think about doing even more. "