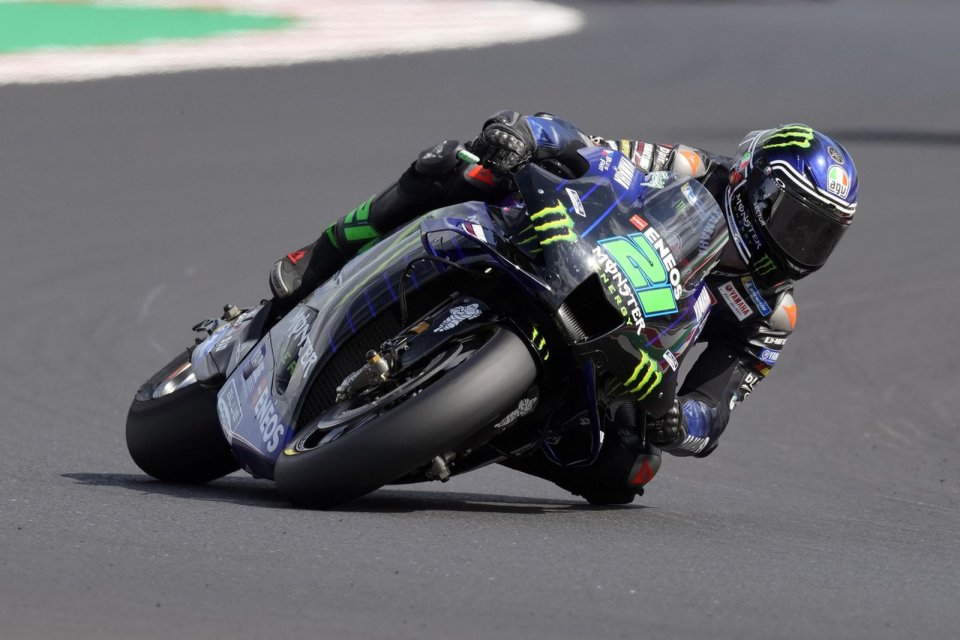 Yesterday afternoon, Franco Morbidelli had openly declared that his return would prove to be an uphill climb. Something he confirmed by today’s performance at the Misano World Circuit Marco Simoncelli, where he didn’t get past an 18th place, with more than 30 seconds behind the winner, Francesco Bagnaia. Although the final outcome is not in line with his expectations, the gap doesn’t represent the real sporting feat accomplished by the new rider of the official Monster Energy Yamaha squadron who  - with a bit of “help” - was able to cover the entire race distance with a  1’33 pace. In short, he just didn’t want to raise a white flag in his home circuit.

“At the end of the warm-up, I didn’t feel confident about taking part in the race, because I was struggling to pull up the M1 after just eight laps. How could I think of doing twenty-seven?” he admitted. “Thanks to adrenaline and painkillers, it was possible, moreover, keeping a constant pace and coming close to Rossi. I’m satisfied. Up until two weeks ago, I was absolutely unable to ride a bike, let alone a MotoGP.”

The three days on the former Santa Monica circuit was an initial and important test bench, in order to get familiar with the Japanese four-cylinder in its 2021 version, more updated compared to the previous model used within the Petronas SRT Team until the Sachsenring GP.

“I was able to continue to study the new technical package. We know we still have some room for growth, especially in terms of set-up. I’ll try to improve my physical condition, but without pushing excessively, step by step. I hadn’t set any kind of goal. I consider myself a farsighted rider, based on how situations present themselves. If I get a good result, then I’ll celebrate. Otherwise, I’ll roll up my sleeves hoping to improve.”

Waiting for the next trip to Austin, the MotoGP master class has today reached a level of competitiveness that makes it important not to stay away from the circuits for too long: exactly three months in the specific case of the 2017 Moto2 Champion.

“This weekend, the essential aspect was to return to my previous automatisms, which you risk losing in the event of a prolonged stop,”  he concluded.