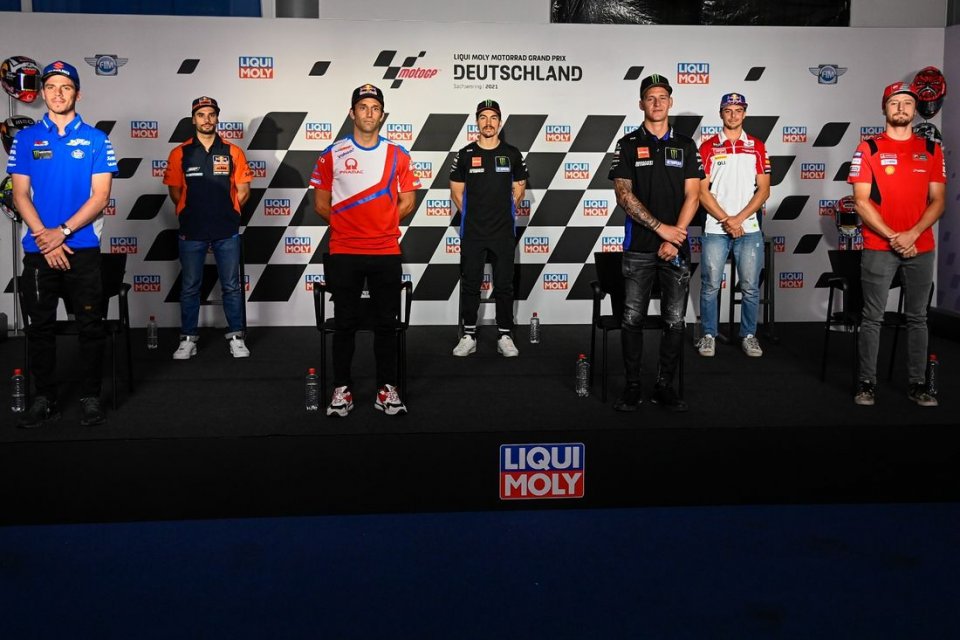 As soon as he sets foot at the Sachsenring, the shadow of Marc Marquez, the dominator for the last 10 years, looms large. Although his physical condition is still far from perfect, this year once again no one wants to make the mistake of underestimating him. Valentino Rossi puts him down as favourite and the two riders at the top of the world standings also expect great things from the Spaniard.

Starting with the points leader Quartararo, perhaps relieved that Marc is not fighting for the title.

“I think he’ll be there - guaranteed the Frenchman - It will be an important moment for him, even if I won’t be watching him. I know he will be fast, but I am focused on myself. For Marc, getting a podium or even winning would help to boost his confidence and I think everyone will try not to let him do it” he commented with a smile.

Zarco also thinks Marquez will go well: “I think he will be on the podium – was his opinion – It’s more difficult to put him down for the win, but certainly here he will be closer to the leaders. He also had time to rest after two races in a row, someone could bet some money on him, he will have to be taken into consideration”.

The reigning world champion, Joan Mir, was of the same opinion: “Marc will be strong, in the past he has had an advantage here, his riding style is well suited to this track. Even if he won't be 100% he will be strong, I don't know if enough for the win, but I wouldn't be surprised if he fought it out on Sunday ”.

All the riders might have been in agreement on Marquez, but there was some difference of opinion on the recent decisions of the Race Direction. While Quartararo has metabolized the penalty for his open leathers in Barcelona, ​​he still has not accepted the penalty for cutting the first chicane.

Fabio expounded: "I want to talk about what happened at Mugello with Zarco, he went out on the green for 3 centimetres and lost one less position: in that way you don't gain time, for me it's a bit too much. As with me in Barcelona, ​​I was 7 tenths slow and I was penalized. It's not a question of safety and so the races become too serious, it's not my job, it's a bit too much for me. "

The Frenchman's words flew in the face however of Miller, who promptly replied: "Race Direction is necessary, the rule that you have to lose at least a second in the short cut to avoid being penalized has been around for years. Before there was grass or gravel and you lost more than a second. That's why we pushed the Safety Commission to have rules. If you start going on the green then you do it more and more, it's as if the track became wider, and there were riders who cut the chicane 2 or 3 times during the race and took advantage. Rules are rules ”.

Instead, Zarco came out in partial defence of the Race Direction, trying to put himself in their shoes.

"There are different ways of seeing things, it is difficult to make a decision quickly, and many times we do not agree but it is the rule. In Race Direction there are good people, others are less so – insisted Johann - It's difficult to accept everything, but now with social media everyone can see everything and discuss it immediately, this puts the Stewards in an even more critical position ”.

Quartararo brought the matter to a close, pointing the finger at what happened in Moto3 and Miller had nothing to say about that.

"Seeing the last lap of Barcelona, ​​there was no safety, what some riders did was totally stupid, cutting the trajectory of others, especially after what happened at Mugello. We always talk about MotoGP, but we should focus more on Moto3”, were Fabio's words.