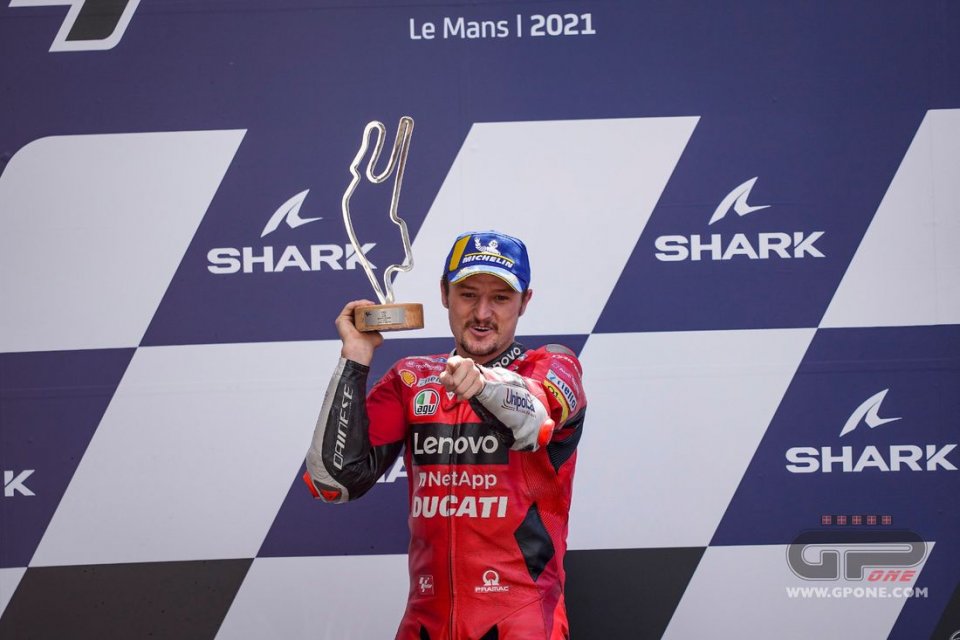 Miller’s face is that of a rider who’s living a dream he never wants to wake up from. After breaking the ice in Jerez with Ducati, he did it again in Le Mans in a crazy race. The Australian rider gets excited when the weather gets in the way, and today was his day.

“I honestly don’t know what to say. First, it was dry, then wet, then dry again, and the wind hit you from all sides. It was certainly a long race,” he said. “In the beginning, Vinales was strong and then Quartararo was also. I was under attack from the Yamahas. Then it started to rain really hard. It was like entering a wall of water. I couldn’t brake, went into the gravel, and was about to fall like a kid on a bicycle.”

What’s more, they also gave you two Long Lap Penalties for exceeding the maximum speed in the pit lane.
“I couldn’t believe it. I didn’t know what I did, but French speed cameras always catch me,” he said laughing. “I thought that the penalty section was slippery, so I was careful at the first one. At the second, faster. Then I recuperated on Fabio, passed him, and managed the advantage in the last laps. With eight or nine laps to go, I also thought it would have been better to return and mount the slicks, but the pit lane is too long at Le Mans.”

You never thought you’d lose the victory.
“Not really, except when I nearly fell into the gravel. After the two penalties, I realized I wasn’t too far from Fabio.”

Your previous victories were one when it was dry and one when it rained. What’s it like to win in a flag-to-flag?
“Winning in the MotoGP is always fantastic. I’m not saying that winning this type of race is more stressful, because I had to manage the pressure in Jerez that Morbidelli and Bagnaia put on me, but today it was different. Essentially, it was more of a mental test than a physical one, because you have to be very focused to understand what conditions you’ll find at the next corner.”

The Ducati looks like the bike to beat at the moment.
“It’s the best Desmosedici I’ve ever ridden. We’ve worked for years to get to this point. I’m super happy and proud to get these results for Gigi and all the other guys.”

How is it that you’re so fast when it’s wet?
“I push hard. In fact, I also fell a lot this weekend,” he said laughing. “No, I don’t care that much if the bike moves. I don’t know if it’s because I come from cross and dirt track. Since my first race in the rain, I’ve been strong. It comes naturally to me. Also, the characteristics of the bikes I rode - Ducati now and Honda before - also helped me.”

Did you always have the situation under control for the bike change?
“I had talked a bit with the guys about the strategy, and I knew that I'd always find the bike ready in the garage. They’d turn it on at every lap. The only doubt was whether to stop to put the slicks in the end, but it’s not easy to make a similar decision when riding in the race.”

Quartararo proved to be fast even when it’s wet. Do you think he’s an even more dangerous opponent now?
“We know that Fabio is always very strong when it’s dry. Now he’s also strong in the rain, but that’s not something that worries me. There are many other competitive riders in those conditions, like Marquez, or Petrucci, who’s perhaps the best. In the end, that’s how it goes. Sometimes it’s your day, and this was mine. It had been much worse last year.”