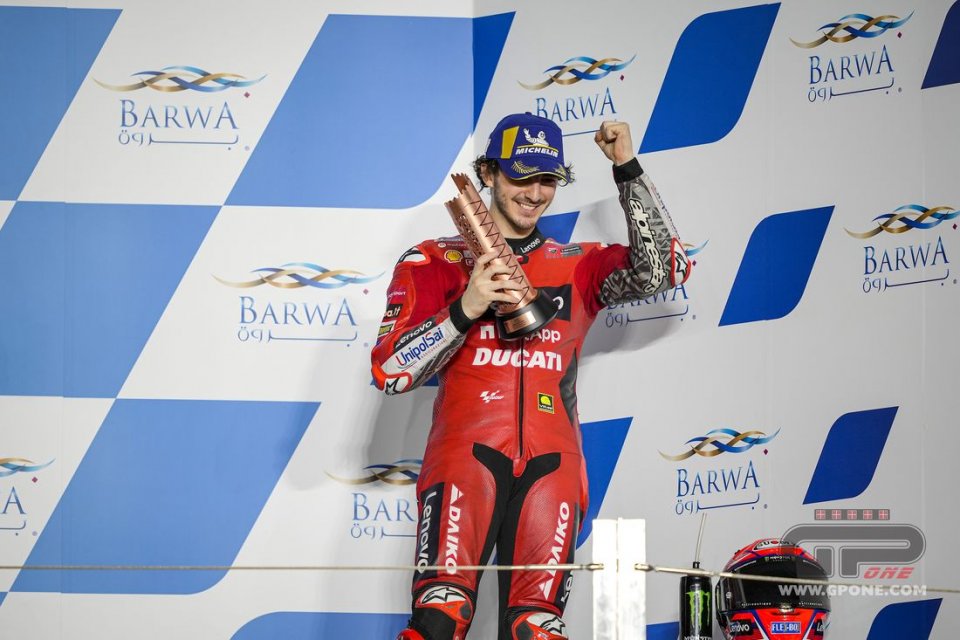 It is all a question of viewpoint. Bagnaia's third place in Qatar could be seen as a good result to start his adventure in the factory Ducati team, or as a half disaster on a friendly track and after yesterday's record pole position. What does the man himself think?

“I'm disappointed, but I shouldn't be – was Pecco's reply - I come from a second half of the season in 2020 where I crashed a lot and made many mistakes, so I'm happy. The Ducati engine salvaged the  podium ”.

“I did the wrong strategy by putting myself in front and pushing hard, then from the middle of the race onwards I struggled with the rear tire. Today there were different conditions than in the tests, I thought I could keep that pace until the end, but I suffered a lot. I looked at the tire in the parc fermé: on the right side it was finished ”.

Should you have been more conservative?

“There would have been the risk of being in the middle of the group and then having to push hard to overtake, my pace was the right one, but for yesterday's conditions. Today it was 7 degrees lower and the wind ".

Could nothing be done?

“I tried everything, I closed all the doors, in fact I have marks on my leathers (laughs). When Vinales passed me I tried to follow him but he immediately went away. Then came Zarco, I thought I had a similar pace to him, but he went ahead of me and Mir himself. On the last lap I took a lot of risks to get closer, when I saw Joan go wide I just thought about doing the last corner perfectly ".

You weren't as fast on the straight as you were in practice.

"A little was the fault of the wind and also we didn't have much traction, the Yamaha came out better from the last corner while I lost a bit in the first part of the acceleration."

What did you learn from this Grand Prix that might be useful for the next one?

"We need to focus on the second part of the race, try to find more grip at the rear because we have problems in that area if I don't have new tires. After the tests I had decided to touch the bike more, now we will analyze the data and make some changes to improve corner exit, because I feel good under braking and the middle of the corner. If I had had a bit more traction today I could have stayed close to Maverick. "

Are you confident that you can solve the problem?

“We have to study the data, things can be adjusted: it's just a matter of setup”.