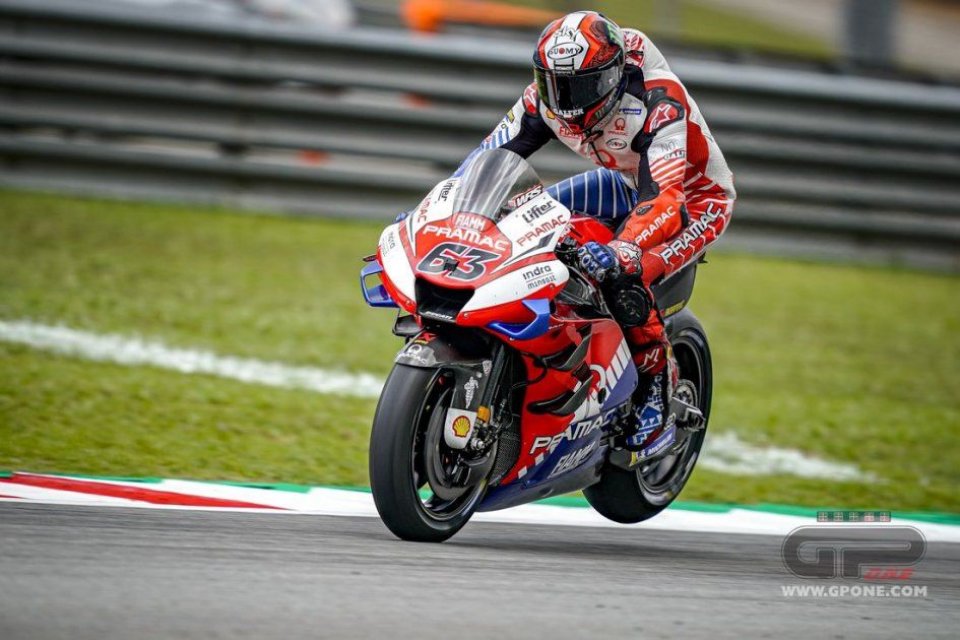 Marquez, Rossi and Dovizioso often take turns on the podium of the best "brakers" according to data released by Brembo, the Italian leader in the supply of braking systems in the world championship and beyond. Let's find out what lies behind the technical gesture of braking (in jargon) which, if performed perfectly, enables a rider to gain precious time on a lap of the track or to produce splendid overtaking moves during the race, perhaps with the rear of the bike floating just an inch above the asphalt.

From theory to practice ... 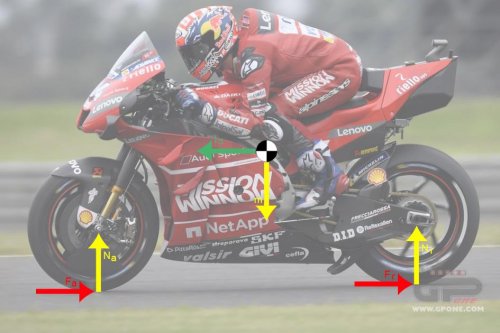 Let’s come back with our feet on the ground, or rather with the wheels on the asphalt, and analyze from a technical point of view the physical phenomena affecting the motorcycle during the deceleration phase. The first principle of dynamics (Newton's laws of motion) asserts that "an object either remains at rest or continues to move at a constant velocity, unless acted upon by a force”. Which means, leaving aside the uninteresting case in which it is stationary, a body characterized by a constant forward velocity would continue to proceed at the same speed if no other (resistant) forces intervened to slow it down.

The most relevant are engine braking, friction of mechanical parts, aerodynamic resistance to forward motion and rolling resistance of tyres. Only the latter allows you to slow down the vehicle. The action of the rider on the brake lever generates an increase in pressure inside the hydraulic circuit which allows the pistons of the brake caliper to push the brake material ("pads") against the brake disc. The pad-disc contact would tend to lock the wheel, as the latter is integral with the disc, but the friction present at the point of contact between the asphalt and the tyre causes it to continue to roll (within certain limits), generating a force opposite to the forward motion which allows you to slow down the bike. 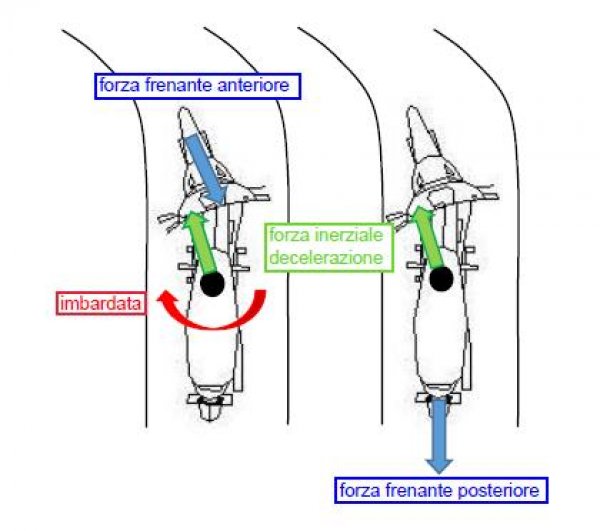 … and vice-versa. Why is the front brake more effective? 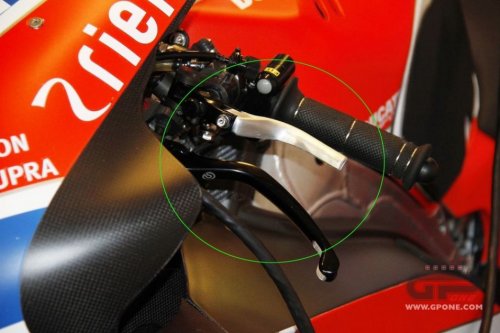 Practically, anyone who has ever ridden a motorcycle or any other vehicle with the brake controls differentiated between front and rear has easily been able to see the greater effectiveness of the former. Pushing a bicycle by hand and firmly operating the front brake, the bike will stop almost instantaneously and tend to tip forward. By actuating only the rear brake, the relative wheel will tend to lock and with discrete ease you can still push it forward.

It is good to remember the physical principle whereby increasing the vertical load applied to the contact point increases the friction force. This explains why the front wheel, having greater load, is able to express greater braking force. It is interesting to note that the load transfer increases with an increase in the total braking force and the height of the centre of gravity from the ground, while it decreases with an increase in the wheelbase. The limit, in order to avoid wheel slip, is imposed by the coefficient of friction between the rubber and the asphalt. This, multiplied by the dynamic load (represented by the static load plus or minus the load transfer), expresses the maximum braking force applicable on the single wheel. Beyond this, the wheel will lock up. 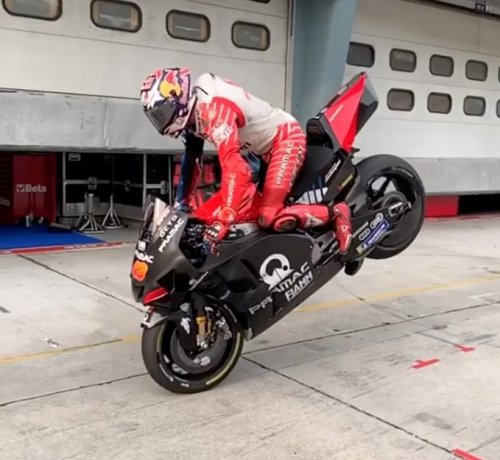 Another unwanted phenomenon is obviously overturning. The limit condition, a position of unstable equilibrium, occurs when the rear wheel does not touch the ground and therefore all the weight of the motorcycle rests on the front wheel only. By applying zero rear load to the equation of equilibrium of the moments with respect to the centre of gravity, it can be seen that the maximum braking force that can be applied, which must not be exceeded to avoid overturning, depends on the mass of the vehicle and on the position of the centre of gravity (both vertical and longitudinal) .

The first factor can only be worked on during the design phase, while in order to modify the second factor, riders tend to move backwards with the body during braking, thus moving the centre of gravity rearwards. It would also help to lower the centre of gravity but there is the constraint imposed by the seat. An example in this regard can instead be taken from the world of MTB where, thanks to the aid of a telescopic seat-post, cyclists can lower the saddle before a steep descent. This allows them to have enough space to move back and down, moving the body beyond the saddle towards the rear wheel, thus managing to counteract the phenomenon of overturning. 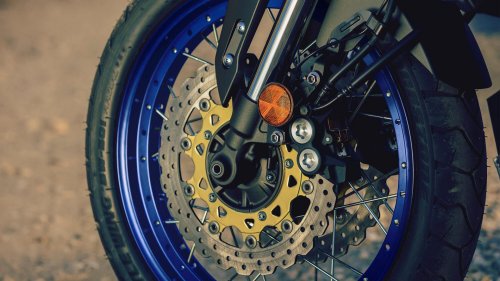 The ideal braking distribution is not fixed but depends on the friction coefficient which, if it is very high, allows 90% of the total braking force to be obtained from the front, while on slippery roads, such as in the case of wet asphalt, the contribution of the rear brake can increase to 40%. Maximum braking performance is obtained with the joint use of both brakes, having the foresight to modulate them according to the condition of the asphalt.

Many motorcycle manufacturers offer for their vehicles - especially those for city commuting rather than tourism - a combined braking system that allows you to operate the brakes on both axles with a single lever. If the distribution is fixed and does not vary with changing asphalt conditions, the designers are forced to adopt a compromise solution between maximum braking performance and safety to avoid unwanted slipping and locking of the wheels. Sports motorbikes are generally not equipped with this riding aid, completely entrusting the rider with the distribution of the braking force both to obtain maximum performance and because on the circuit in some hectic phases of the race, a desired and controlled slip of the tyre can be beneficial.

The rear brake and its usefulness

How to distribute braking introduces the much-discussed use of the rear brake, often mistreated and forgotten by a large number of motorcyclists for various reasons, more or less accurate, such as uselessness, poor efficiency, inconvenience of operation, little sensitivity etc. In the case of linear bikes, dry asphalt and excellent grip, the contribution offered by the rear brake is, as mentioned in the previous paragraph, negligible, while by decreasing the adhesion between asphalt and tyre, the importance of the rear brake increases until it becomes fundamental in case of a low friction coefficient.

Regardless of the contribution in the most critical situations, the rear brake guarantees a stabilizing effect which is particularly useful when entering corners. When you are about to go through a curve, the condition of straight motion, the combined effect of laterally lying down the bike (the lean angle with the centre of gravity moved towards the inside of the curve) and the rotation of the handlebar are therefore no longer respected. They cause the inertial deceleration force (the same as the one that projects us forward when we brake) and the front braking force to no longer belong to the vertical symmetrical plane of the motorcycle perpendicular to the asphalt.

This phenomenon generates a pair of forces which tends to make the rear of the motorcycle yaw towards the inside of the curve. In addition, as we have already seen, a load transfer is generated from the rear to the front. In other words, if during the corner turn-in phase, you exaggerate with the action of the front brake only, the rear part of the motorcycle will tend to rise and turn towards the inside of the curve, generating a possible loss of control of the vehicle. In this situation, the use of the rear brake is very useful, because it generates a force in the opposite direction to the inertial one so as to produce a stabilizing effect as the yaw angle tends to decrease. It is as if the rear part of the motorcycle was pulled with a rope in the opposite direction to that of the bike, intuitively if the rear tends to curve towards the inside of the corner, the action of the rope acts as an aid to reposition it on the axis. In fact, this is a commonly used riding technique, if you arrive slightly "long" when cornering or out of trajectory, use the rear brake to close the curve and resume the desired trajectory. On the contrary, insisting further with the front brake would accentuate the problem by making the trajectory even wider.

VIDEO - Jerez needs an arm of steel for braking