It seemed more like the Texas GP, where Marc Marquez has always dominated, undisputed, than the Argentine one. In fact, at Termas de Rio Hondo, we saw something almost identical, since the Spaniard saluted the group at the start, to then race unchallenged to his victory. During the week when the MotoGP turned into the Far West, Magic Marc put on his sheriff's hat and restored order.

Number 93's is a verdict that doesn't need an appeal, and he didn't leave anything for his opponents, who were forced to settle in scrimmaging for second place. So Marc says farewell to Termas with all his spoils, at the end of a weekend where he turned out to be a real steamroller. We were given a first clue during Friday's free practice, where no one was able to contain him on the race pace. Then, the confirmation in the qualifying  lap and, finally, the superiority he showed during the race, to such an extent that he reached the finish line with a 9"8 lead. Never had there been such a margin by a winner in the top class in dry conditions.

An all-Italian challenge, where the Doctor played attack and defense, to then slip through and overtake Dovi during the last run, leaving him no chance to respond. In this Italian derby, Marquez can only thank Rossi, who took major points off of Dovizioso, forced to settle for third place and second in the World Championship.  A result that Andrea certainly can't ignore, on a track that, over the years, has resulted in more disappointments than smiles for the Borgo Panigale team. Remaining on the Ducati theme: there's no hiding Jack Miller's fourth place. He did better than Danilo Petrucci, who was only sixth preceded by Alex Rins' Suzuki.

Then we have those who didn't even make it to the finish line. A tried and true drama unfolded on the opposite side of Yamaha's pit when Franco Morbidelli unfortunately rammed into Maverick Vinales on the last lap, causing them both to take a fall.  And ready to take advantage of this occasion were Nakagami and Quartaro, who preceded Aleix Espargaro's Aprilia, ninth at the finish ahead of Pol Espargaró's KTM.

If at Honda Marquez ended his weekend in a joyful dance, Jorge Lorenzo must console himself with a twelfth place after a weekend seasoned with many difficulties. Behind him, Cal Crutchlow, who was forced a ride through because of a jump start when he was in fourth position. Behind the British rider, who won in Termas a year ago, Bagnaia's Ducati, and Zarco's KTM. And finally, but most disappointedly, was Andrea Iannone at the bottom of the group.

We'll definitely be wishing on a star in the States. 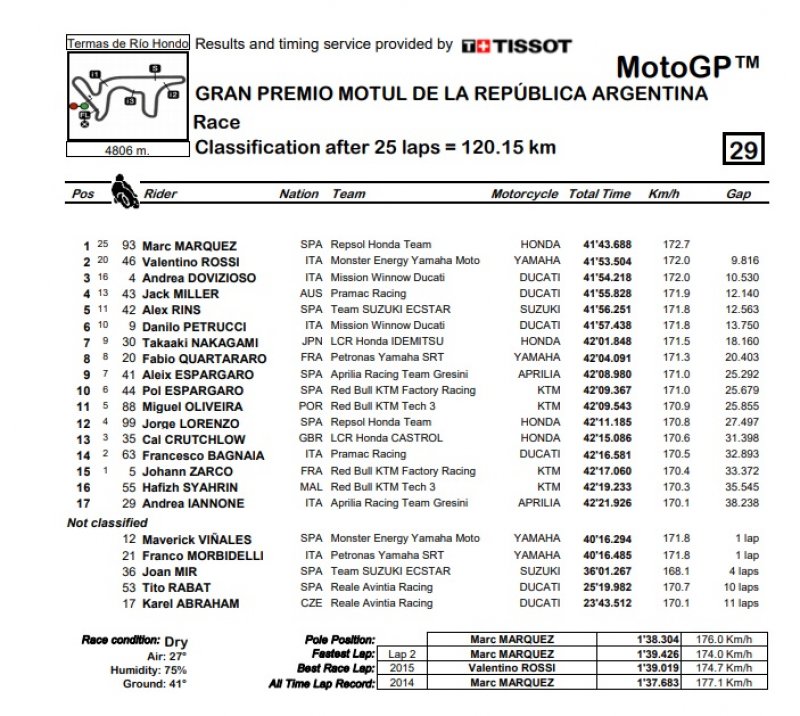