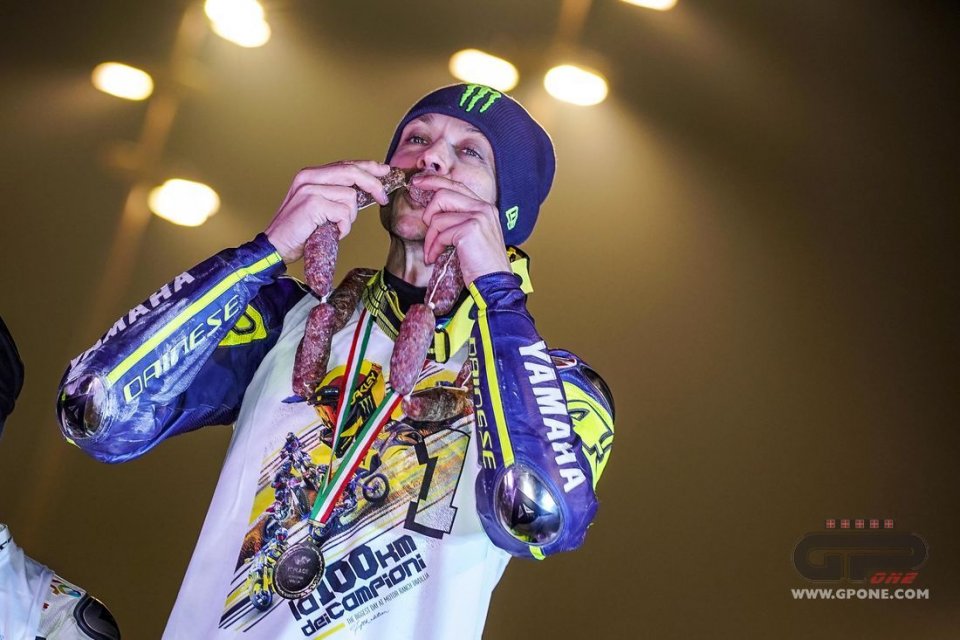 There is nothing better than heading off on holiday with a win and adrenaline coursing through your veins, Valentino enjoying both these things yesterday. The "100 Km of Champions" that he organises each year at his Ranch in Tavullia is not a GP, but riders put in the same effort, perhaps even more aggressive in their attempts to succeed. Rossi, paired with Morbidelli, triumphed, thanks also to a mistake by Pasini in the final laps due to a misunderstanding with a lapped rider.

“This is an important win because neither I nor Franco have won much this year, so going from zero to one makes a big difference! And now we can wind up Paso and Balda for a whole year” jokes the Doctor before putting a salami chain around his neck, the prize for winning.

You didn't hold back and even hurt your knee…
“While I was fighting with Pasini I hit one of the poles marking the track, I felt my knee twist and  it was very painful. I decided to finish the race and the adrenaline meant that I was able to ride. We'll see how I am in a while, I hope it's nothing serious”.

For a race between friends, you all really pushed…
“Aggression helps us to grow and improve, something Franco and Baldassarri demonstrated here. Sometimes it's not easy to manage and you might exaggerate but it was a great race. Morbidelli and I were the supposed favourites, but Mattia and Lorenzo were slightly quicker than us, we were able to win though”.

Morbidelli was your ally today, do you think he may become a dangerous rival next year?
“I've known Franco for a few years and he's one of those riders who really spurs you on in training, it's like we take turns to do so. He's made an impressive start on the Yamaha”.

What does he think about the M1?
“He really liked it, the Yamaha is a friendly bike for riders after all. But he too think we need to find more grip”.

Is he more in agreement with your or Vinales?
“I don't think the character of the M1 has changed with the new engine, the problems are the same. Maverick, as always in testing, has been strong, but I'm simply saying what I think”.

Speaking of rivals, what did you think of Lorenzo's debut on the Honda?
“He struggled a little at Valencia, but then seemed sorted at Jerez. He'll be a frontrunner in Malaysia”.

Hamilton tested the R1 at Jerez a few days ago…
“Lewis is a big bike fan, we often exchange messages. He always says that us bikers are the real 'drivers' but he exaggerates. It's normal for F1 drivers to be attracted by bikes, and vice versa, they are two similar but very different disciplines”.

Hamilton has often said you're his favourite rider…
“I thank him, I think I've deserved it after all these years of racing (he laughs). Lewis should come to the Ranch, we'll have to arrange it ”.

He might discover the secret to your eternal youth, what does this place mean to you?
“The VR46 Riders Academy is important to me, because training alone is tough, but doing it with others is more enjoyable and more challenging. It all helps me too, because it keeps me young”.

Do you still enjoy racing?
“Of course, but here's it all easier because you're only thinking about having fun, with no pressure. In MotoGP, the riding comes last after the travelling, the commitments with sponsors, so many dull activities, including talking to the journalists (he laughs)”.

How do you think the next edition of the 100 Km will go?
“We'll try to have more big names in future, sadly many had commitments this time and couldn't make it. We don't have long to arrange it all unfortunately, but we can do better”.