It's still only Firday afternoon, but FP2 had all the flavor of a qualifying session. Rather than making calculations and saving the tyres, riders headed out on the soft tyre in the final minutes with only one goal - to set a fast time.

The quickest proved to be Maverick Vinales, who set a 1’33”378. A performance that saw him put his M1 out front, leaving the Spaniard with a smile on his face. Andrea Iannone came close to the Yamaha rider in the closing stages, but The Maniac had to settle for a gap of 0.121 of a second.

Valentino Rossi (+0.401) further confirms the M1's competitiveness at the Assen track, lying fourth, just 0.015 of a second behind the first Ducati, or rather that of Danilo Petrucci. Despite closing four tenths behind his team-mate, the Doctor seems to make the difference in the central sector of the track, though he's losing a little in the first sector.

Back to the Ducati camp, and Andrea Dovizioso (6th +0.481) and Jorge Lorenzo (7th +0.492) have proved that they have every intention of being in the mix, the pair separated by just 11 thousandths of a second. Despite a few doubts, the red bike appears to be performing well at the Dutch track.

The factory GP18 riders are followed by Marc Marquez on the Honda (+0.663). Let's not be quick to judge though, as #93 was the only top rider who did not use the soft tyre, prefering to work with the hard solution for the entire session. Unlike Crutchlow (5°, +0.434), who was the quickest of the Honda riders, while Dani Pedrosa (+0.789) closes eleventh behind Johann Zarco (+0.755).

Alex Rins (+0.669) also closed inside the top ten, ninth at the session's end, while Aleix Espargarò, Jack Miller, Franco Morbidelli all missed out. 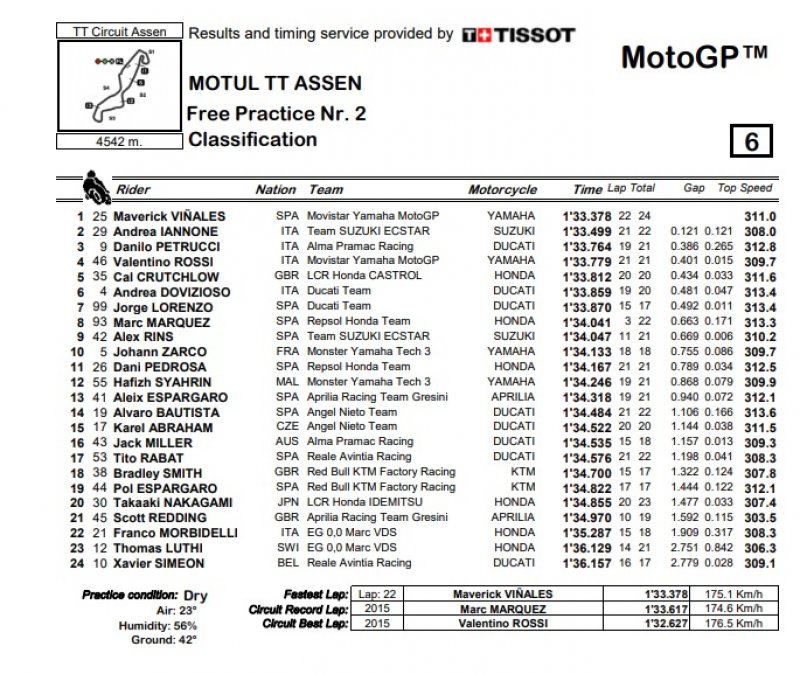 In a video on You Tube, the driver defended his reasons but confirms the end of his experience with Audi in the Formula E
5 sec ago

Rainey: "With the way things are in California right now, there is no way we can race with spectators at Laguna Seca in July ". The series is set to...
4 days 19 hours ago