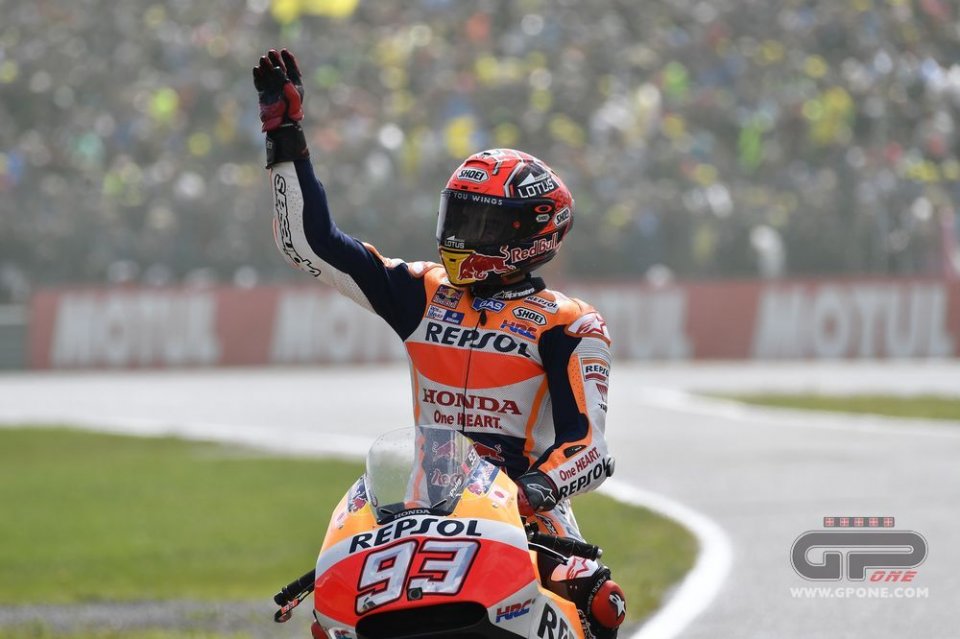 “This second place is worth the same as a win”. It may seem like a circumstantial phrase, but the numbers agree with Marquez. The little devil listened to the little angel this time and transformed a defensive race into a success.

“My team repeated it to me 40 times this morning: if it rains, just concentrate on finishing the race” he laughs.

Was it your mentality?
“On these occasions you can earn a lot of points or lose just as many. I thought only about concentrating on myself. I didn’t worry about what the other riders were doing.”

Even when Miller passed you?
“Valentino had crashed. When I saw Jack behind me I said: go on and win, 20 points are just fine for me. They’ll be important at the end of the season.”

Falling was easy …
“The second race was only 12 laps and a lot of riders pushed hard straight away. That’s why they fell. Also because the rear tyre provided good grip and it pushed on the front, making it close up.”

Is it safe to say you have half the championship in the bag?
“Absolutely not, I don’t even have a one-race advantage over Lorenzo, it’s 24 points.”

But 42 from Rossi…
“It’s a good distance, especially from Valentino. He is riding well and I consider him to be very dangerous.”

Speaking of Valentino, in the warm up were you trying the cut across the chicane?
“Let’s say that I made a mistake (he laughs) Pedrosa was there and I had a go. It was better to do it; it could have come in handy (he laughs).”