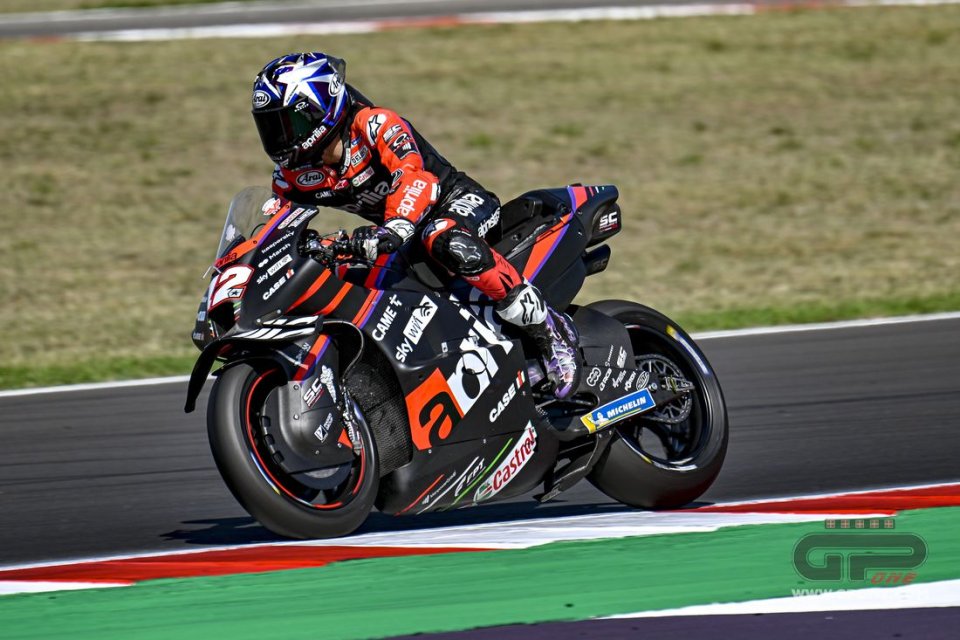 Life is smiling on Maverick Vinales and so are his results on the track. His confidence with the Aprilia increases from race to race and the 3 podiums in the last 4 GPs are a clear demonstration of this. The best, however, seems yet to come and in this sense the Misano tests were an important appointment for the Spaniard.

"We focused a lot on the setup because in the last race I struggled a lot in the last part, I wasn't as fast as I would have liked - he explained - We made a clear improvement, I collected data for next year and I tried some things that go in the direction I like. I'm happy with the result and the work done”.

The most valuable piece concerned the chassis.

"I tried a new chassis and I felt much better, in theory it is for next year, but with Aprilia we want to win and we will use it already during this season - revealed Maverick - It would be interesting to try it on other tracks, because in these test there was a lot of grip, it will be interesting for Aragon to understand how it works. I think we have taken a huge step forward”.

The next round will be at his and Espargarò's home, will the two teammates help each other?

“I don't think Aleix will have any problems at Aragon, but if he does, giving him a tow allows him to gain a couple of tenths, for qualifying it would be very smart to play as a team because if you start up front at Aragon you have already done half the race. And if there is a chance to win, I'll try. Here at Misano I had it and I think I will have another one at Aragon," he declared.

There is an interesting fact in Vinales’s (short for now) history with Aprilia: he has never crashed.

“It means I'm not at the limit yet - he laughed - I still have a margin, I haven't taken any step backwards, but all forward. The day will come when I will end up on the ground, I still have to find the limit of the bike, especially on the flying lap”.

A crash at the penultimate corner, on the other hand, interrupted the day for Aleix Espargarò, who picked up a fractured little finger of his left hand in the accident.

"It's nothing serious - he explained - I could do a qualifying session now, but at the moment it hurts quite badly so with the team we decided to skip the afternoon test session. It's a very simple fracture, which will heal by itself."

In the tests, the Spaniard focused mainly on the future.

"We worked a lot in view of 2023, but we will analyse the collected data very calmly because everyone went very fast due to the conditions of the asphalt - he underlined - The grip was very high so we will have to be clever before making decisions".

Now is the time to think about Aragon.

“It is definitely a good track for me, after two difficult races like Assen and Misano - said Aleix - Then we will move on to the races outside Europe. In the last five races, Fabio and I have scored more or less the same points while Pecco's Ducati has made up a lot. So the time has come to make up points, we hope to be able to do it at Aragon. "