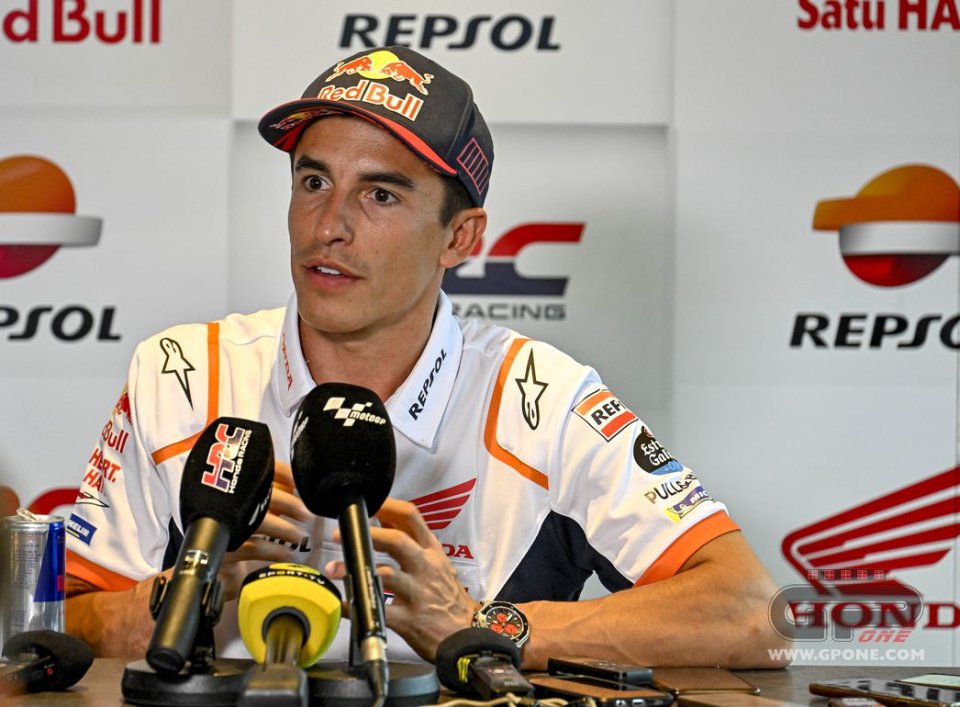 Marc Marquez has lots to stay and didn’t back down from an interview with Izaskun Ruiz from DAZN Spain. A chat in a car (sound familiar?) during which the Spanish champion talked about his present, past, and future.

Yesterday, Marc received from his doctors the okay to be able to train seriously again. A first step towards his return to riding. But the 8-time World Champion was already happy the last few weeks. And to think that a person who cares a lot had asked him if it was still worth continuing.

“My grandfather said to me: ‘stop it, you have enough to live. What you’ve done is done. Stop it’, Marc said. “I replied: ‘I promise you that this is the last chance for my arm.’ I told him that if it didn’t go well ... there would be nothing more to open. It’s difficult in terms of mentality. When they took off my brace, I started to move my arm, to pick up a glass normally, to eat a piece of meat without raising my elbow. Now I eat like a normal person. These are little things. I haven’t raised my arm at ninety degrees in a year. I’ve been revved up for two weeks, but I’ll have some lows. It happens.”

His recent past has been difficult, both physically and mentally.

“I read that I should retire.  I say that I will when I feel like it. That’s quite clear,” he emphasized. “I’ll know if I have to leave or not. At the moment, I’m the Honda rider with the most points in the championship, and the others are not slow. That phrase obviously hurts. You don’t know, you can’t say, ’Stop now’ . After all, I use social media to inform my fans. The haters? Forget about them. Those who’ll be having fun are those who are suffering with me now.”

The time to get back on the bike is approaching, and Puig hasn’t hidden the fact that he’d like to see him on the bike in the Misano tests.

“Honda is interested in me being present at the Misano tests but, from the Japanese to Alberto Puig, they know what I’m going through and, if I have to wait another week, they’ll respect me,” he made that clear.

Also because they desperately need him. The RC213V doesn’t work, and even the team seems to have broken down.

“It’s not all lost, but we’re at a point where it would be very easy to panic,” Marc said. “It’s not a disaster. It’s like a puzzle. All the pieces are on the table and some are upside down. I’m not asking for anyone’s head but, the way I work, I have the feeling that information is lost, great ideas, just because ... I don't know, sometimes emails are lost.”

So HRV needs to change, otherwise Marquez will start looking around.

“It depends on Honda. How much do I give them? The two years I have in the contract,” Marc stated. “I’m not going to deny it. I always say, ‘Honda is Honda, the brand of my dreams’. They’ve respected me a lot, and I’m very grateful for everything they’ve done, but as long as I race and think I’m at a high level, I want a winning project. Otherwise …” He’ll leave. He didn’t need to add anything else.

But we first have to see him return to the track and fight because his absence has been felt.

“It was the perfect storm,” he said ironically. “An engaging  sport because it has icons,  and they’re created with rivalry. Being a bleeding heart is fine up to a certain point, but it happened because there hasn’t been a melee so far between the three rivals. When there will be, well ... In Assen, it went well because Aleix finished the race and came in fourth. If he had fallen too, there would’ve been more tension. Different things happened together. Valentino Rossi’s retirement struck everyone and moved many people. Pedrosa, Lorenzo, Rossi, Dovizioso ... now, there’s Quartararo who already has a name. Bagnaia is going really strong, but she doesn’t have that name yet. What makes things grow are rivalries. People like gloom.”