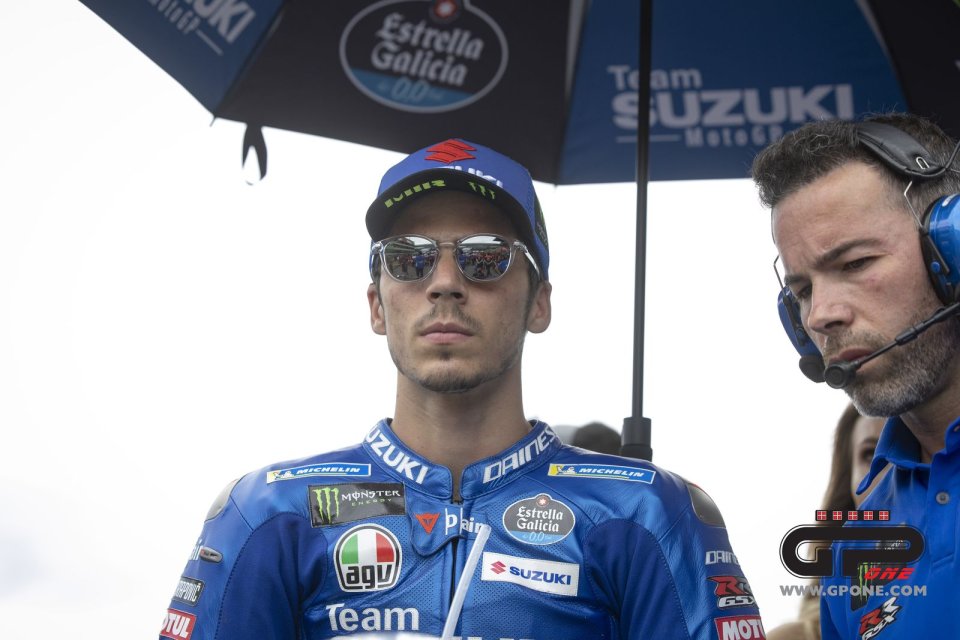 It is definitely not a lucky year for Suzuki. Along with the announcement of its retirement at the end of the season, and after Alex Rins’ injury in Barcelona, now it’s Joan Mir who, with a bad highside, fell just a few laps after the start of the Austrian GP. His conditions seemed good, but he feared for his ankle. The possibility of a fracture looked plausible, but further check-ups were expected, which have now officially arrived. Joan Mir has a probable injury to his ankle ligament and will miss the upcoming race at Misano.

The latest tests show bone and ligament damage to his right ankle that will force the rider to rest for at least the next 15 days.

Team Suzuki Ecstar’s Joan Mir suffered a terrifying crash on the opening lap of the Austrian Grand Prix last Sunday at the Red Bull Ring circuit. The first tests and X-rays performed at the circuit medical centre directly after the crash revealed a small fracture in the talus bone of his right ankle. Having returned home on Sunday night, the rider from Mallorca underwent further tests in Andorra.

Yesterday he visited Dr. Juan Garcías at Hospital Juaneda Miramar in Palma de Mallorca where he underwent a CT scan and an extra MRI as the doctors wanted to rule out bone damage to the left talus head as well as the right. Despite issuing a more encouraging diagnosis than expected, Doctor Juan Garcías found ligament and bone damage on the right side and he recommended caution, advising Mir to take absolute rest for the next 15 days. This means Joan will not be able to race in Misano.

The patient had an injury to the talocalcaneal ligaments with a small bone avulsion. A stable tibiofibular joint, but with bone contusion on the head of the talus. In this case, the tibiofibular joint was stable and there was no total instability in the navicular bone. Conclusion: talus-calcaneal-navicular ligamentous injuries with instability grade I-II.

Mir will undergo another round of scans to assess the injuries following his 15 day rest period, in order to determine the course of treatment and, if eligible, to try riding at Motorland for the Grand Prix of Aragon.

In the forthcoming days Suzuki and Dorna will evaluate the best solution for Misano.

"After undergoing several tests, the doctors have advised me to take 15 days’ rest and another evaluation after that period. Unfortunately, I will miss the Misano race, but I am confident I can return in Aragon. I want to thank Dainese and AGV for protecting me and avoiding a more serious injury after the hard crash I had on Sunday. It's been a tough season, but I'm convinced that we'll come back stronger to bring more good moments to my team and to all of you who support me."

As did Team Manager Livio Suppo:

"I’m very sorry for Joan. Problems continue to arise during this difficult season. In any case, we should remain upbeat. The crash was really big and in the end the injury is a serious one, but it could have been worse, so let's be positive and see how he will recover in the next 15 days to hopefully be ready for Aragón."