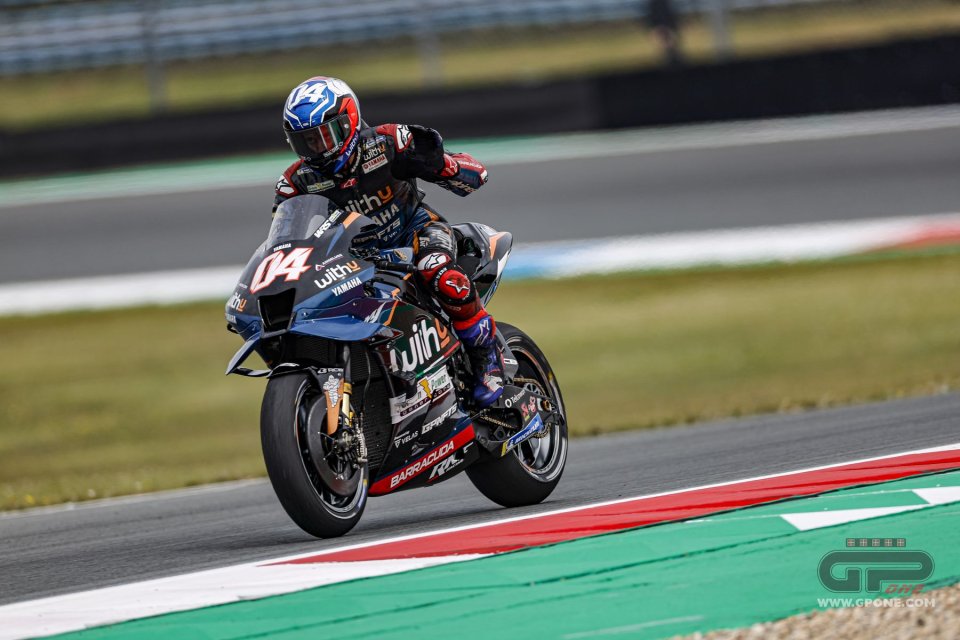 The news released today by Yamaha regarding Andrea Dovizioso's retirement after the Misano GP was a real bolt from the blue in the paddock. Andrea himself had said several times that this was his last season in MotoGP, but everyone imagined that at least he would have completed this painful season.

However, the summer break obviously brought advice to Dovi, who in agreement with Yamaha decided to call it a day and do it on what can truly be defined as his home track. Many riders decided to comment on this news, and everyone expressed some wonderful words of esteem for a rider who has written important pages in the history of MotoGP, especially in the years of his last-corner duels with Marc Marquez.

"I did not speak to Andrea, but obviously he had a very tough season - Quartararo said at the press conference - He has been stopped for almost a year and we all know how difficult it is for those who have been stopped for a long time to get back to the highest level. If he is not having fun on the bike, he did well to make this decision. He has had a fantastic career and I think he has a lot of wins in MotoGP, he was great. I wish him the best and I am sure he will be doing motocross every day now. "

Aleix Espargarò also believes that the lengthy stop is at the origin of Dovi's problems.

"It is a shame to finish a good career like his in this way. But as Fabio said, with the current level of MotoGP it is difficult to stop for a year and be competitive again. Andrea was an excellent example for me and for everyone in Aprilia, how to work as a team, how to improve to get to the top after being at the back of the group. I wish him good races now. "

Bagnaia: "One of the most important Italian riders, he did a great job with Ducati"

Bagnaia wanted to remember the importance of Dovizioso for Italian riders, in the years in which he was the only antagonist of Marc Marquez.

"I haven't talked to him about it yet, but he's made up his mind. He has every reason to do so and I agree with his decision. We all agree that he had a great career, one of the most important riders in the world. Italy and a great example for everyone. He did a great job at Ducati. "

Luca Marini's thoughts were really nice, as always very analytical in his evaluations and capable of going beyond the surface.

"I guess it was in the air, we knew he would retire at the end of the year, but we all expected it to happen in Valencia, the fact that he decided to stop before is a bit strange. In the end, if everyone is happy like this, in the team and Yamaha, it will be the best decision for everyone. The important thing is that they are satisfied. I think Dovi has had a great career, in the end I have watched him since I was little. I supported him, they were good years and I think he had a great career in MotoGP too. For sure he mustn’t have any regrets, he was in a difficult and awkward era of MotoGP. In my opinion he has always been characterized by never wanting to play as if he were a character, he was always out of the limelight. But I really appreciated him and I still appreciate him a lot for that. I think that riders like him need to be more recognized, because in the end he was awesome, he went really fast. It's not easy, he did battle with all the strongest riders in the history of MotoGP. In my opinion he has had an outstanding career, I just give him lots of compliments. We would like more like him. "

Miller on Dovizioso: "MotoGP is full of stress and dangerous, you have to feel good on the bike"

Nice words also from Jack Miller, who underlined how risky MotoGP is and how necessary it is to be at the top.

"He has had an incredible career, but I also believe that being out for a year and then embracing another project is not easy at all. He gave everything, I'm sure. This sport, however, is full of stress and dangerous and if you don't have fun on the bike, it's right to stop. I completely understand his decision. I wish him the best and hope to see him around again. "

“I'm sorry, it's a pity – were Diggia's words - he is one of the first riders I got to know when I arrived in the World Championship and we have a crazy relationship. We are in touch with each other a lot and we go to ride together with the motocross bike, we fight against each other. Especially at the beginning of the year, when we were both struggling, we spoke often. Andrea is a rider who has won a lot and it’s always bad when one of the good ones leaves”.

“I didn't expect it, I thought he would finish the season - said Enea - I'm sorry, because he was a real character in the world championship and these are moments that you never want to come. Dovi is a great rider and a great person, so much so that we often train together with the dirt bike. I like to clash with him, I think he still has potential, personally I wish him the best for the last three races”.