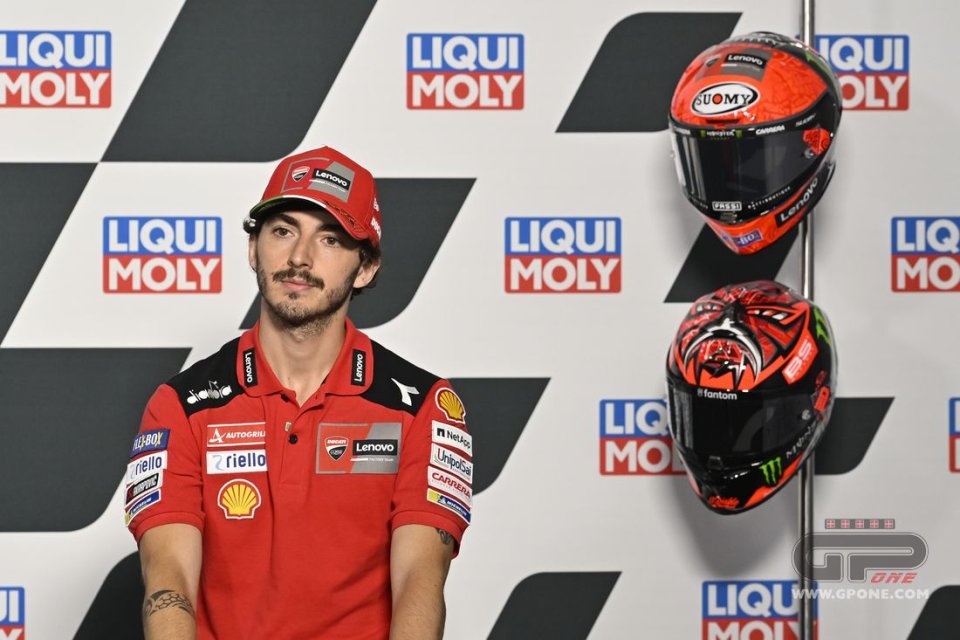 Pecco Bagnaia is one of the riders who represents the present and the future of Italian motorcycle racing, together with Bastianini, Morbidelli, Marini, Di Giannantonio, Bezzecchi. Young and eager to establish themselves in MotoGP, to hold the Italian flag high after it has had so many illustrious representatives in the past. Knowing history is always important and Ducati’s rider from Piedmont seemed to have done his homework, so he was not caught off guard when he was reminded of the birthday of Giacomo Agostini, who turns 80 today.

“First of all I wish him all the best - he said - You grow up knowing what he did, of course they were different years from today but I think he was the first to change the rules of this sport. He is a legend and he will always remain so ".

It will be difficult for anyone to ever reach his achievements, but Pecco's goal is to be able to at least bring the MotoGP title back to Italy. Not an easy feat, considering that Quartararo is already 66 points away.

"Last year my ambition was to recover 70 in 5 races, now I have 11 - he said - The ambition is the same, but I also know Fabio is the strongest at the moment, he rides perfectly, so it won't be easy".

Have you got over your anger from Barcelona?

"I tried not to think about it, that's the past and I have to forget about it to focus on the next races".

“Everyone can make a mistake, of course you get nervous at the moment. I told him not to worry, more than anything else I hope that what happened will lead to the Stewards to have an extra eye when certain accidents happen ”.

Nakagami said he got sucked into your wake.

"It happens at high speed, when you are doing 350 per hour, not at the start when we are all alongside each other. I don't think that was the reason for the accident, it was an error of judgment and he missed the braking point. It can happen to anyone, I also made a similar mistake in Qatar, involving Martin ”.

What happens when you find yourself in the wake of another rider?

"It happened to me last year, also in Qatar, when I entered the air tunnel of Zarco's bike and went straight. You feel the bike accelerate instead of braking, but it’s not just an effect caused by the aerodynamics, it happened even when there were no wings ".

It won’t be a problem at Sachsenring, it’s not a track where you reach high speeds.

“Last year was a difficult weekend, but then I was competitive in the race, so this time it could be good. In 2021, on this track, Miller and I had started something different that helped Ducati change its mentality. In fact, our bike started to turn better, despite being the same as the 2020 bike. I don't think there are any more circuits where we struggle, even if it is difficult to say today ”.

You talked about Miller, next year he will no longer be by your side. Who would you like to replace him with?

“First I want to wish Jack my best wishes, I know he will be as strong as he is now. Whoever arrives in the Ducati garage will have to understand how we work together, they mustn’t bring nervousness”.

Let's go back to the Sachsenring, why don’t you like it so much?

“It's a strange circuit, it's not one of my favourites but I don't think it is for many riders. It is certainly a historical, technical and difficult track and therefore also fascinating. It has a lot of left corners, so the tyres get hot on that side, plus it's a small track and our bikes are getting bigger and more powerful. But the thing that nobody likes is that the race is 30 laps, that's a lot ”.