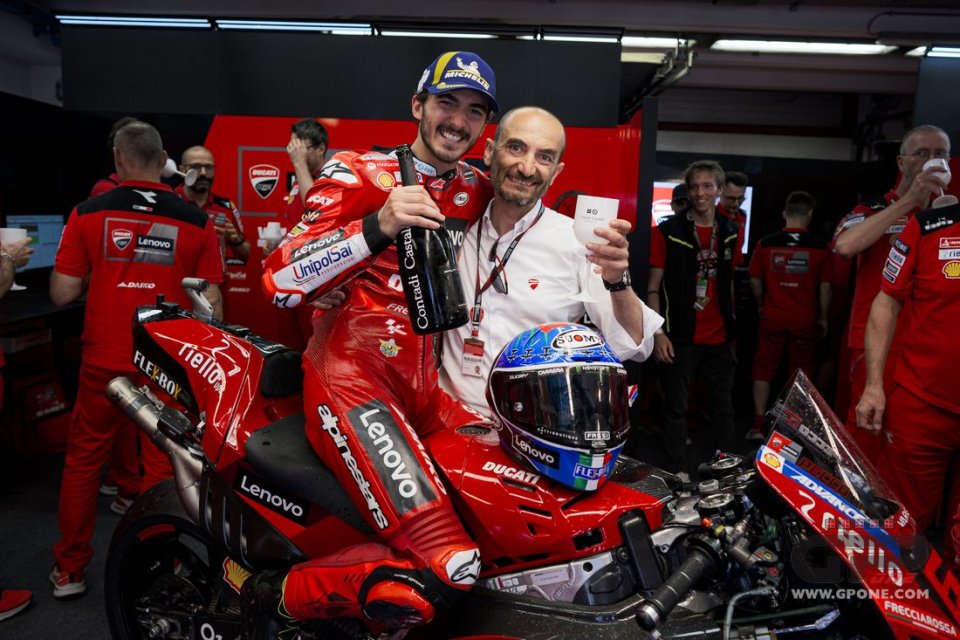 Ducati yesterday presented the World Ducati Week in Mirabilandia, the big Red Party to be held from 22 to 24 July in Misano. Three days with many events and all the riders who race for the Borgo Panigale manufacturer.

CEO Claudio Domenicali was the host: "We are very excited because we will do the WDW in attendance again, after 4 years, and we will have all our riders with us, it will be a great party and we can't wait ".

The event is Ducati's business card. What is the secret of the Borgo Panigale company?

"I believe that if we had to summarize it in one word it would be passion, that of all the people who work in Ducati, they are so involved that their work becomes emotion and makes them very close to the enthusiasts who buy our bikes, they are not customers but friends - said the CEO - Many things change, technology evolves, but the base, human relationships, does not change. Being together and having fun is part of human nature ".

A big commitment, but it pays off.

"The WDW is a very exhausting event to organize, even economically demanding, but the satisfaction you feel, what you see in the eyes of the fans who come from all over the world, makes it clear that there is a very strong bond. These 3 days generate a huge emotional charge that pay off all the efforts ”, Domenicali assured.

Impossible not to talk to him about MotoGP, which sees Ducati with 8 bikes on the grid but not at the top of the standings.

"Certainly the classification does not pay off the efforts we have made - he said - We also made mistakes from a technical point of view at the beginning, the bike was not ready and Bastianini benefited because he found himself with a bike that was ready right from the start. The riders made other mistakes, Enea put the bike on the ground twice in a row and it is so difficult to aim for the title when there are other riders, such as Fabio and Aleix, who have not done anything wrong so far. We also had a good deal of bad luck, because in the last race it is hard to blame Pecco, but we scored zero points at a time when it was important to succeed and when Bagnaia was very strong. He would certainly have fought it out with Quartararo ”.

Another hot topic is who will take the second spot alongside Pecco Bagnaia next year. The runoff is between Bastianini and Martin and uncertainty does not seem to be good for the two riders.

“I don't believe in these things, if you give them the contract soon, they make a mistake because they have pressure, if late it's the same thing - underlined Domenicali - They are professional riders and they are good. We want to have Bastianini and Martin with us for the future, they are two guys who are part of our plans and we are working towards this. I don't think it's the right time to do all the evaluations, also because no one has had the opportunity to express themselves fully. Jorge was operated on this week and his bike wasn't that ready at first, let's give them some time. In any case, they will both have exactly the same chances next year because they will have two totally identical bikes. From a sporting point of view they will start in the same way, from a technical point of view the same ”.

When will the decision come?

"It won't be in the next two races, we want to take a little more time, and nationality will have no importance, it will be an exclusively sporting evaluation" was the answer.

In SBK, however, Ducati is leading the championship thanks to Bautista.

“Alvaro is doing some very convincing races, he is determined when needed and more reflective when it is useful - was Claudio's opinion - The championship is still long and both Johnny and Toprak are two very hard opponents, they make very few mistakes and are very strong. It will be a very tough World Championship until the end and we are happy that Bautista, back on the Panigale, immediately demonstrated the competitiveness of the bike. It's a combination that works very well ".

The fans have not forgotten Petrucci, who is involved in MotoAmerica but who everyone would like to see in World Superbike.

“Danilo is a rider who is part of our team, we were sorry when we were unable to keep him with us. We have not yet defined the 2023 program with him, but we are very close to him and his manager. We are trying to understand which is the best solution”, Domenicali assured.

Claudio Domenicali: "At Ducati we wake up in the morning to create...