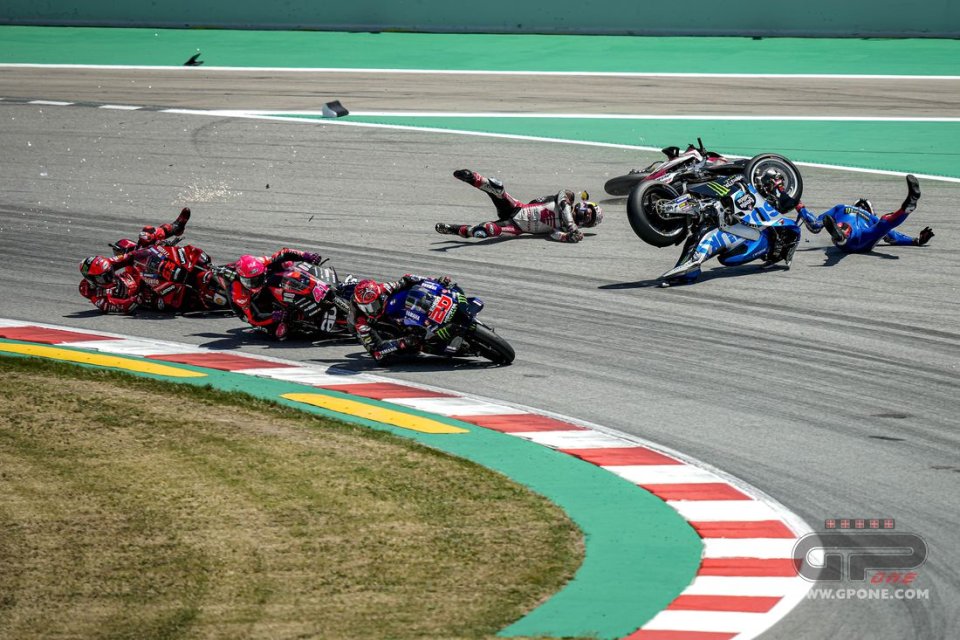 Pecco Bagnaia's Barcelona GP lasted just a few meters before he was knocked to the ground by Nakagami, who also involved Rins in the accident. In addition to the damage, Ducati’s Italian rider also had to suffer from the fact that Takaaki was not penalized for his manoeuvre.

"First of all, I am happy that Takaaki is OK, that he has not suffered any serious consequences given the extent of the accident. He hit my wheel, it's 170 kilos of bikes plus my 65, he moved me and made me crash: it was a big blow – said Pecco – Having said that, you can't pass 10 riders in one braking move. He had a good start and I didn't understand where he wanted to go, if I hadn't been there, he would have gone into the gravel and finished his race here. We threw away other points, there was a chance to win today, but that's the way it went. "

Race Direction did not take any action, despite both Ducati and Suzuki complaining ...

"Lucio Cecchinello also complained ... I think we need a little more common sense. It is expected that in the world championship you have skills of a certain level. We don't need to see Nakagami's data, it is clear that he braked at the wrong time. If everyone lifts off, you can't remain with the gas wide open, cut off the other riders and make it to the first corner like that. We have been racing in MotoGP for many years, he has been in the World Championship since before me, he is expected to have the ability not to knock anyone on the ground at the first braking point. If we look at his history, every time he has been in front he has never finished the race, in my opinion it is time to take measures to make him understand, if he understands, that this is not good ".

As a rider, how serious was his mistake?

“It always depends on the way it's done. I crashed in Qatar and made Martin crash, there were 9 laps to go and it was a very serious mistake, but we weren't at the first corner of the first lap. We all know that at that moment we have to keep a little margin and with Nakagami it’s not the first time he has made mistakes like this. In my opinion it is irresponsible riding, when I heard that no measures would be taken, I was amazed, especially since there is a former rider in charge of the Stewards".

Did you speak directly to Spencer, did they give you any explanations?

"No, Livio Suppo made a complaint and they didn't even think about accepting it, because they said it was a racing accident, but it didn’t seem like it to me."

Rins said the Stewards have to be changed, the riders have to come together to ask what happens?

"Cecchinello said that he would accept a penalty for Nakagami and that he hoped that with Spencer 's arrival there would be more competence, but that is not the case. In Formula 1 Michael Masi last year made some decisions that were not right for everyone and now he is no longer in that role, so the riders should have more say. I have never allowed myself to say anything on this subject because I am one of the latest arrivals, but we have been discussing it for years but if certain things happen all the time, then something has to be changed ".

We are approaching the middle of the season and Quartararo has opened out a wide margin.

“It will be tough, but the tough keep fighting, I'll try until the math says it's no longer possible. Last year I had the determination to recover 70 points in 5 races, this year I have more grands prix, maybe I'll make it. Fabio and Yamaha are in very good shape, it's a combination that works very well, with Aleix and me Quartararo is the one who makes the most of his bike. It will be a good fight but having 66 points to make up will certainly not be easy. I'd like to gain some at Sachsenring and Assen ”.