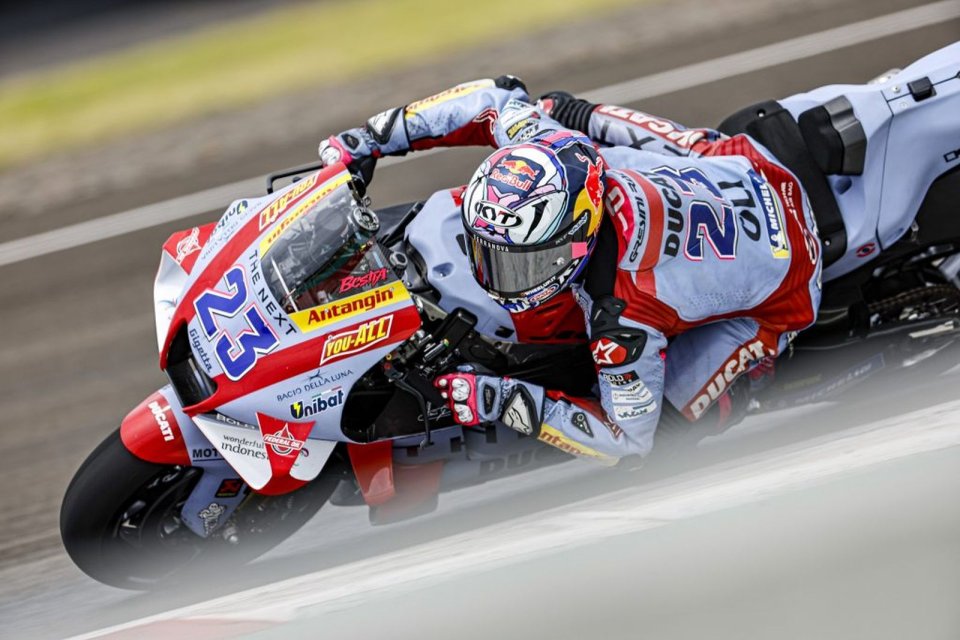 It was an out of bounds race for Enea Bastianini, who started back on the grid, and he doesn’t hide his bitterness for a result that was below expectations. He ended the race in 8th place between Nakagami's Honda and Bezzecchi's Ducati. A result that not only weighs on his morale but also on the ranking, between a Quartararo who increased his lead at the top of the ranking and an Aleix Espargarò who reached his second consecutive podium.

" I would’ve wanted something more as a placing,” the Gresini team rider said. “Unfortunately, the feeling with the bike was never there in this race. We did our best, on defense and in the rankings. A race can end up like you didn't expect it to but the championship is still long."

What didn't work?
”I wasn’t fully at ease. The front closed in all corners. At some point, I thought I could settle, but then seeing Bezzecchi on the last lap ... he was close, and I decided to make an extra effort to pass him, and I did it, but I can’t say I’m happy with an eighth place. It's not the result I was aiming for. We were unlucky in Portimao, so it was essential to get points here  Jerez."

You’ll be testing tomorrow. Will you try something new? What are your expectations?
"First of all, I’d like to get out of here and figure out what didn’t work. It felt like I was riding a whole other bike in this race. I’d lose the front and sway in the back when I opened the throttle. I don't know if I'll get the chance to try something new, but maybe a little something could come along, we'll know tomorrow."

With today's result, your opponents in the rankings are likely to increase the gap even further. Pecco seems to have found the key to interpreting the new Ducati 2022. Do you think you lost that advantage you had with the 2021 at the beginning of the season?
"At the moment, I'm still third in the rankings, but that doesn't mean anything. Pecco had a phenomenal race. After all, he had already showed his potential yesterday in qualifying. Surely, his Ducati 2022 progressed, but this was also a strange race for me. I think the championship is still long, and we’ll certainly have other opportunities to be role players."

Bastianini: "I haven’t signed with Ducati, but I got what I wanted"