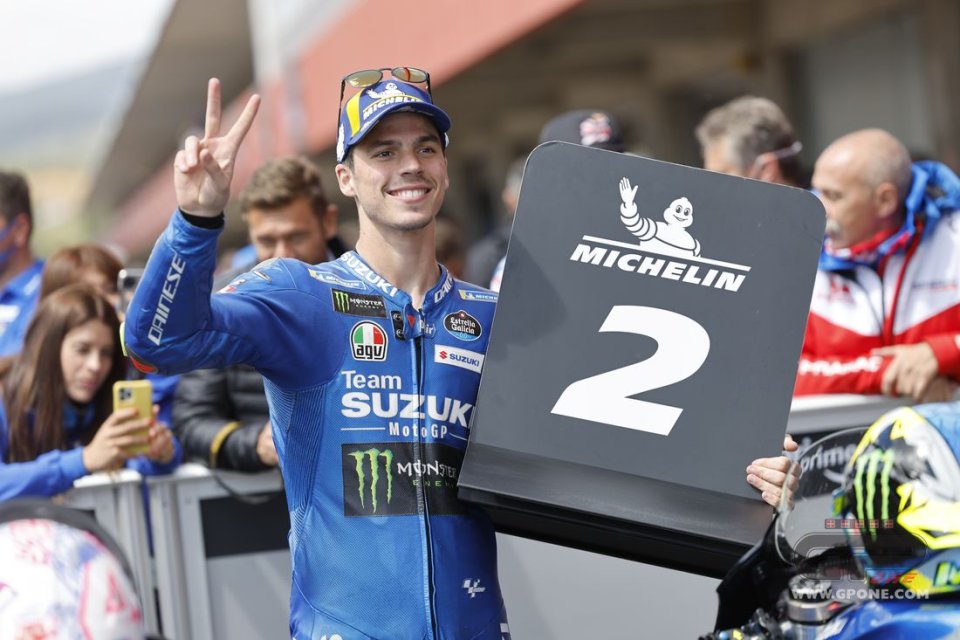 Joan Mir confirmed the excellent form demonstrated during the weekend, first by directly getting into Q2, and then facing Johann Zarco's Ducati in a duel to the last fraction of a second. He finally gave up pole to the French rider but still put in his best qualifying result since the start of the season, demonstrating Suzuki's improvement over last year's qualifying performances.

You missed out on pole by a whisker, it would have been Suzuki's first pole since 2015, but it's still your best qualifying result this season.

"It wasn’t an easy qualifying - Joan told us - after all we saw a lot of crashes in Q1 so even the choice of tires involved some risks, but I think that in the end our choice to use dry tires proved to be a winner. I managed to improve lap after lap, but what makes me happier are my and Suzuki's continuous improvements since the beginning of this season. I really feel in top form, it was not easy to push to the limit with the track in these conditions. The warmup will be essential to complete the final preparations for the race, but this is a track that I like and I think I can get an excellent result tomorrow. "

In the past we have been used to seeing you starting further back on the grid and having to fight hard in the race. Will starting from the front row somehow make the start of the race less demanding?

"In MotoGP you can never relax, starting from the front row will certainly make the preparation before the race easier, at least in part, but it will not be an easy race in any case".

Has anything changed in your strategy in tackling qualifying, given the conditions of the track?

"No, I saw that the track would have dried out anyway, and that dry tires would have been the best choice, so I stayed on the track until the last lap. I think stopping to save the tires is more risky than staying on the track and trying to make a good time, every minute spent in the pits is wasted time ".

You said you were in your best shape ever. Do you feel that now is the time to get some victories and push to get to the top of the championship?

"I think we made a good start to the season – not spectacular, but a good one. Also very constant. I was missing something. And from Austin on, I understood something. Austin is a track that normally I don't like, I'm not fast. And I was able to make a great race and finish strong. I know that in a track that is more favourable to my style, I will be able to get the speed, so we build the speed till now and I think every time I'm getting better with this bike. I don't know what we can do, but the steps we are doing are good steps and we don't go back. We have to stay there consistently but fast."

The arrival of Livio Suppo in the team was certainly a piece that was missing last year. How are relationships between you?

"They are excellent, step by step he is working to improve the team, which I’d like to point out already worked last year but you can always improve. I think that race after race his presence will have a positive impact on the team and on our results" concluded the Spaniard.