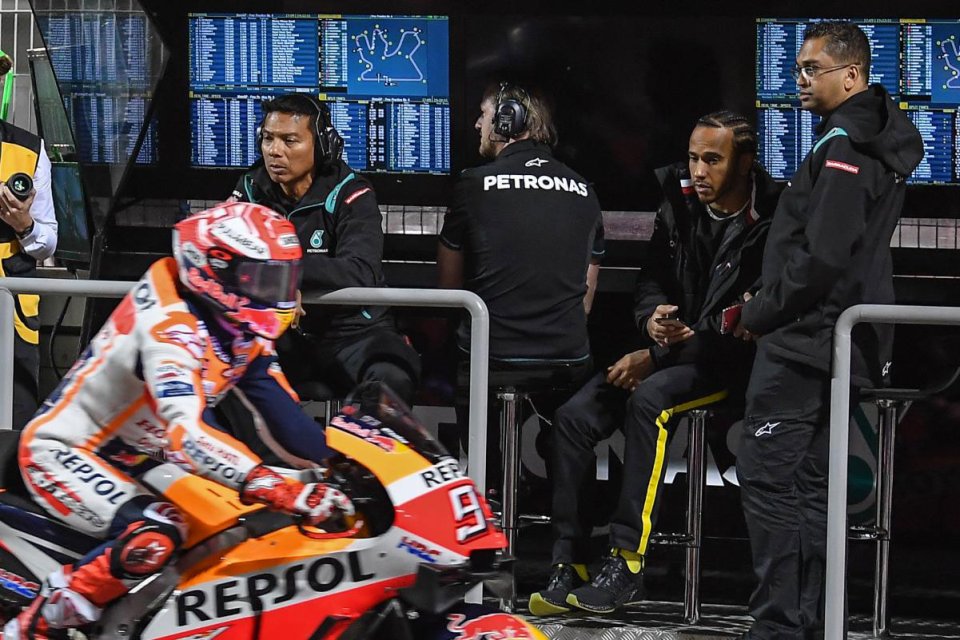 The MotoGP championship will start on March 6 from the Losail track in Qatar, while Formula 1 gets underway at Sakhir in Bahrain two weeks later. There is a possibility that both major motorsport series could kick off the 2022 season with an important absence, that of their main stars. The presence of Lewis Hamilton, in fact, is shrouded in mystery, while Marc at least seems on track to be at the start of the championship. Their situations are very different, but what does not change is that MotoGP and F1 risk not being able to count on their main 'assets' (as the economists say), that is, the two catalysts of global interest.

Both have dominated their respective sport in recent years and are the face of it. Lewis combines his own battles for social issues with the results on the track, Marc is only focused on racing, but they are undoubtedly charismatic characters who divide the audiences. Exactly what is needed for sports that are (or must be) more and more also a show.

Of course, their situations are very different. Marquez was betrayed again by ... himself: a crash while he was training with an enduro bike. An accident that caused him a diplopia from which he is slowly recovering, according to what he told us yesterday. Hamilton felt betrayed by a world to which he had given so much in the final, unpredictable, Grand Prix that awarded the title to Max Verstappen.

So, in recent months, a lot has been written about them without them actually saying anything. Marc pared down his social media posts, just Christmas greetings, congratulations to Petrucci for his victory in the Dakar and some images of him resuming training (the last with a motocross bike). Lewis, on the other hand, has entrenched himself behind a deafening silence: his social media profiles have been inactive since 11 December, the day of qualifying for the last race, and he no longer follows anyone on his Instagram.

When the interesting people don't talk, everyone else does. For Lewis, Bernie Ecclestone also threw in his tuppence worth, maintaining that we will not see him on the track in 2022, while the newly elected president of the FIA, Mohammed Bin Sulayem, threw water on the fire by saying that Hamilton never announced his retirement.

In typical F1 fashion, it's a classic political case. The British champion feels offended and cheated out of a title that was taken out of his hands by the questionable decisions of the now infamous race director Masi, who makes MotoGP’s Freddie Spencer look like a two-wheeled Solomon. Then Lewis deserted the FIA ​​party and now awaits the verdict on the promised investigation before the holidays, because the past cannot be changed, but the future can be assured.

For Marquez it is not that simple, because medicine does not allow political manoeuvring to fix things. In December Honda, in a statement, simply stated that it was necessary to wait to see how the diplopia developed, but ruled out surgery. Almost one month has gone by and it was only yesterday that Marc reappeared in public, with the other HRC riders (including those from SBK). Now before getting back on a MotoGP bike he will have to go through another important test, probably on the RC213V-S, to understand how his eye will respond at high speeds over the course of a whole day

For Honda, not having Marquez already from the winter tests would be a problem, because with a completely new bike to be developed, his contribution is fundamental. Even in terms of the championship, however, Marc is the keystone, considering that in the last four years no other rider of the official team has managed to win even one race.

MotoGP also needs him, after losing Valentino, because another season without Marquez would be another tough blow to the sport. Even if the #1 has not been on his fairing for two years, the rider from Cervara still represents the benchmark, the man with whom the new generations must shape up against. If the 2021 Formula 1 season was all about the Hamilton vs Verstappen clash, a remake in the world of two wheels would be a godsend to overcome the loss of the Doctor.

MotoGP cannot do without Marquez and the same can be said of Formula 1 with Hamilton, but the future of both men is shrouded in mystery, with the hope that everything will turn out for the best in the coming weeks.