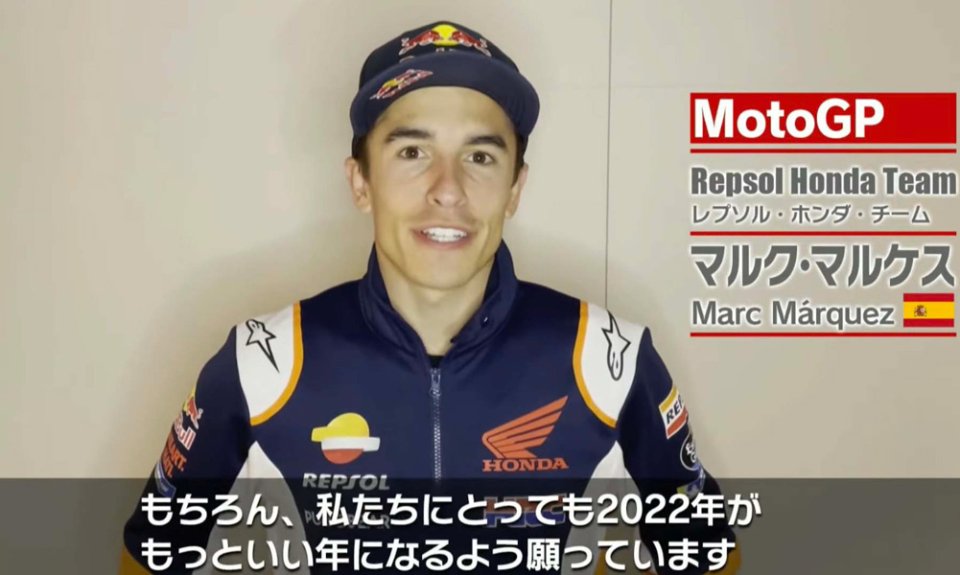 As promised, Marc Marquez turned up in front of journalists this morning, on the occasion of the presentation of Honda’s 2022 season. It was the first time since the training accident on an enduro bike that led to his diplopia that the Spaniard has talked about his situation, and the news was positive.

"First of all, I’m really happy," were his first words. "A vision problem is never easy. I just followed the advice of my doctor, the same one that did my vision already in 2011. It was a very slow process but we knew this when I had the injury. It was a nerve that affects the muscle… The recovery with the vision is not something you can play with. You have clear vision or you don’t. it’s on or off. It's been tough since then, because you never know what's going to happen, but last week I felt an improvement and the medical tests were positive. This allowed me to get back on the bike and I chose the off-road because that was where I was injured. Furthermore, motocross is a very competitive discipline, you have to be very precise and you have to see well. The result was very positive and now we are thinking about the next step, the last one missing. Now all the Repsol team is trying to organise a test with a CBR1000 or the RCV, I don't know where, Valencia or Portimao. I'm the first one when I have an injury, I want to ride the next day. But with experience, and in this case from 2011, you can’t say how long.”

How did you deal with this latest injury?

“Mentally it was one of the hardest moments in my career. It is the fourth winter that I find myself in these conditions, after the problems with the two shoulders and the arm. Another injury came just when I was feeling good, I had won at Austin and Misano. In life you can never know, you must always be positive. I do not wish for anyone to experience certain sensations, but now I am better. From the first moment my goal was to be at the first test or the first race of 2022. We are on the right track, but first I have to do a test on the track, the vision is very important. I will follow the advice of the doctors ".

What have been your thoughts in these months?

“Recovering from an injury like this is not something you can play around with, you either have clear vision or you don't have clear vision. It's on or off. So, starting from this point of course I'm the first one that when I have an injury, I want to ride the next day. But the experience, especially in this case from 10 years ago in 2011, was exactly the same situation; you don't know, and you cannot say. And the doctor didn't say to me 'you will be OK in three months, six months or one month'. I mean, it's something that even the doctors don't know. When you have this kind of injury everything is on the table. I mean, surgery is on the table, time is on the table and the possibility to not ride a bike is on the table. So, it was difficult and was a hard time because you don't know your future. Especially the last month started to be better and better, and when I started to feel better one week ago I started cycling a bit, then I start with the mountain bike cycling and the feeling was good.”

Has an operation definitively been averted?

"Of course, if I'm riding a bike it's because the surgery, it looks like we will not need it because I have a perfect vision. But at the moment, I follow the advice of the doctor. I want to try more days and I want to try in a GP circuit to see because I want to be 100% sure that when I start the pre-season I will be fixed and I will be ready to do a normal season. He wants to see in a GP circuit with high speed alone, a one-day test with a lot of laps, if when I get tired I have some problem or not. I want to evaluate, and my doctor wants to evaluate all these things before allowing me to be in the Malaysia test. So, for that reason from the first moment I got injured we took a conservative way. Step-by-step, time will fix everything. If time doesn't fix everything, we will need surgery, but it looks like time is working in the right way and everything is good. So, looks like we won't need another surgery and I hope I don't need another surgery on my vision."

Is training in motocross or enduro too dangerous?

“Training off-road is dangerous, but so is doing it with a CBR 1000 on tracks where there are no safe run-off areas like those in the World Championship. When it happened it was a normal day: I woke up and went to train on a small circuit near home with Joseph Garcia. After about twenty minutes, I decided to do a couple more laps and crashed in a right-hander. I did a high-side, but got up right away and went home. After three hours I started to feel something strange in my eyes and head and I called my doctor. He told me not to panic, to wait a week, that if everything was not resolved then it would take longer and when it went by we realised that there was a problem. This is why we didn't immediately talk about my problem, we wanted to wait. The risk is always there, if you stay on the sofa you don't run any risks, you can compete every Sunday but you can't be the best in the world without taking them ".

For a few months you disappeared from social media networks.

"I tried to forget the work and just have normal life and stay at home. I tried to forget what I was doing and what I’ll do. Especially the first weeks of the injury. But obviously it’s difficult and obviously it’s hard. Especially when you have a vision problem that in the first month I couldn’t even have a normal life. I was on the sofa, I would stand up, I was like one hour, I try to go on the seat but it was impossible. The feeling was not great. For that reason, I say I don’t wish anyone to have these kinds of injuries."