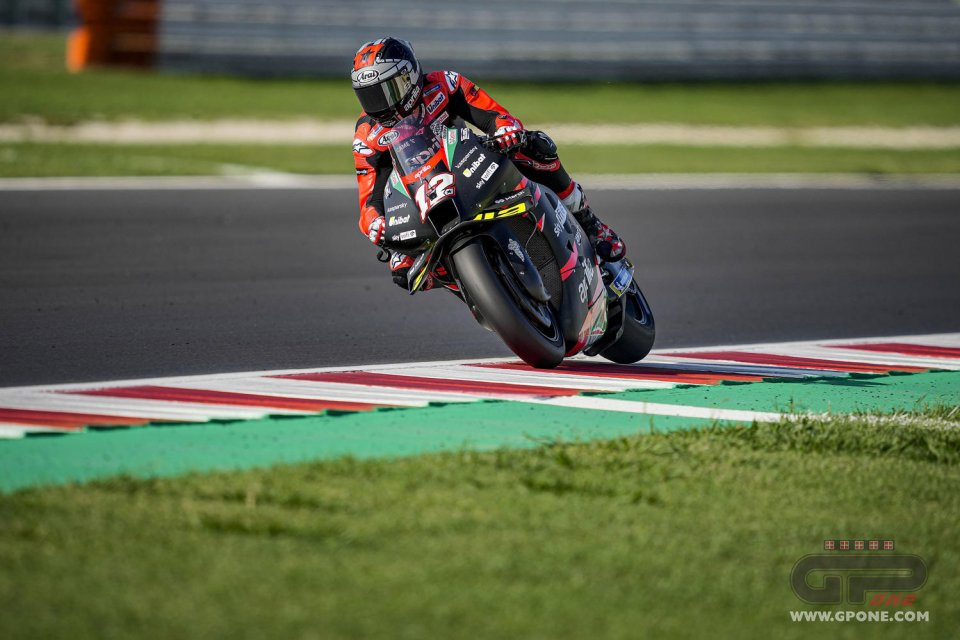 Maverick Vinales is really starting to enjoy the situation with Aprilia and today he gave the best demonstration of how his adaptation process is going in the right direction. Today the Spaniard finished a race that he had experienced almost entirely in a comeback in 8th position and very close to his teammate Aleix Espargarò.

A truly remarkable result, which is useful from the point of view of morale and which confirms the right path that Top Gun is taking on the Noale machine. Aleix knows this bike and the whole Aprilia project well and being able to finish so close to him means a lot for Vinales, who knows he has taken a major step forward in the learning process since he first got on the RS-GP at Misano in the first test.

"When you start in the middle of the group it is always difficult, I must admit that I'm not used to it at all and I hope I don't have to get used to it - joked Maverick - for me in those phases it is difficult to find where to pass the opponents, I always lose a lot of time. At least today we made a nice set-up change to the bike that worked very well for me. We are using the races as tests and I am happy with the solution found today, because in the second half of the race I was going very strong for the conditions we had. We are continuing to work, I know we will arrive step by step. This top 10 gives me confidence, I made no mistakes and I think I am on the right path. "

Savadori would have taken a 2022 hybrid bike to Portimao. Are there any of your indications behind that bike already?

"I am very sorry for what happened to Lorenzo Savadori, and I am very sorry not to be able to test those innovations that he was supposed to have tried in Portimao. I am now entered as an Aprilia regular rider and not as a wild-card, so I can’t bring some technical innovations to the race (which gives us the impression that the aerodynamic package of the RS-GP 22 will be different, Ed.). I also asked Rivola because I thought I could do it, but there’s nothing doing! A big hug for Lorenzo in the meantime, I hope he will recover soon, it was really a pity ".

At one point you were very close to Aleix, why didn't you attack him?

"I didn't really have the chance to pass Aleix, because I had lost too much time behind Marini and I didn't get behind Aleix early enough to try to build a pass, but in the end it's not that important, I'm not focused on going better than him. I am focused on my feelings on the bike, on the work we are doing. I feel the potential I have on this bike because although I am not comfortable I can also be second or third on the list of fastest laps at the end. This means that while I'm not comfortable I'm fast, so I can't wait to see where I can get when I'm comfortable on the bike. We need more steps forward in the braking area, but I'm getting closer. "

Is it difficult for you to make many set-up changes even just before the race?

"I have to learn a lot in a few laps each time. Often I use a slightly different set-up in the race so it's difficult for me to get on the track and push to the limit immediately. I think that in this race I could have been much further up, but in the first laps I lost something like ten seconds or more, otherwise I would have finished much further forward. It’s clear I’m making progress, even though it is true that we were in Misano where many riders have lapped a lot and are all fast, but the others are in the same condition as well and I felt really strong today. In Portimao I think I'll do something more, I think today starting in the first two rows I could have finished in the first three or four ".