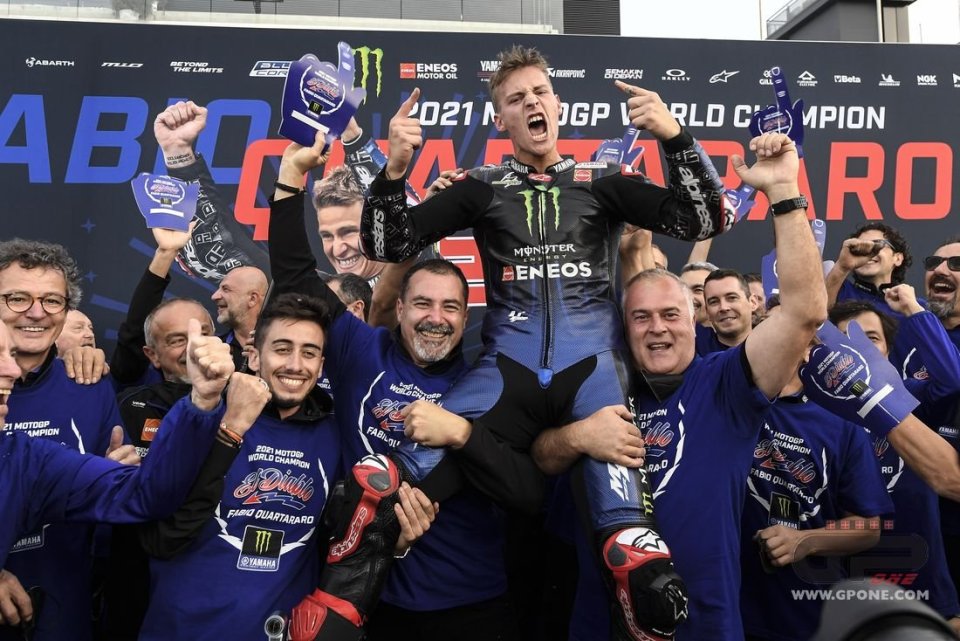 The press room at Misano is scene for the World Champion’s conference. Fabio Quartararo enters, sits down, and grabs a bottle of Prosecco. He takes a long swig and says: “It’s time to celebrate", as he smiles. Then the first French champion in the history of the premier class exclaims:  “I’m ready now”.

“It’s only been a little over an hour since the race ended, and I already lost my voice. I screamed a lot. It was  great,” he said. “As soon as I crossed the finish line, I thought I never would have expected to win a world championship a few years ago, when I ended up in bad situations. This is a dream come true, and I still can’t believe it.”

How was the eve of this race?
“In the MotoGP, I had never started lower than an eleventh place, and today I was fifteenth, in one of the most important races of my life.  And then there was the the nightmare of the rain. This morning, I woke up at five, looked out, and I was able to go back to sleep only when I was sure it wasn’t raining.”

Were you nervous?
“Very. I was stressed. Then I thought about the last three races of last year. I didn’t even care about the result, I just wanted the season to end.  Experiencing that situation helped me win this title today. It made me learn a lot, but I still have a lot to learn.”

Was 2020 difficult?
“I raced for the factory Yamaha and, in the end, 2019 was better. With this year’s M1, I immediately felt better, the confidence I have with the front allowed me to win the title. Today, I made a precautionary tire choice. I suffered a bit with the front, but I still enjoyed riding.”

What was your best quality this year?
“Consistency. I finished all the races. I always took home points, even in Jerez, when I had the  compartment syndrome problem This 2021 was similar to 2019, but with more speed.”

When did you first think you could win the championship?
“At Mugello. Bagnaia was very fast, but he made a mistake. I battled with Mir and won. I gained a lot of confidence there.”

You talked about the difficult moments in your career. Which were the worst?
“2016 and 2017. I always mention the race in Argentina where I started twenty-eighth, practically near the Safety Car,” he said laughing. “Those was the hardest but also the ones that woke me up. After winning two titles in the CEV, my goal was to do it in the Moto3 World Championship. Instead, I couldn’t even win a race. In the Moto2, only the second year went better, when I won two GPs, even if I was disqualified in one. But I didn’t expect to move into the MotoGP.”

Instead…
“In the first test in Valencia, I said to myself, ‘where the hell did I end up?’ I couldn’t ride. The bike was too powerful… but now I’m asking for more power,” he laughed. “But I was able to progress, step by step. After every day, I got closer to the leaders, until the race in Qatar. That’s when I realized it would go well.”

How important has your family been?
“I usually don’t like having so many people around but, for this Grand Prix, I wanted my dad, my mom, my brother, and his wife. They were really helpful. I couldn’t even eat these days. They’ll also be coming to Portimão. I wasn’t sure if I would win today. I’ll have less pressure there, and we can enjoy the race together.”

Pressure was your weakness last year.
“I never got angry this season. In the last one, in Valencia, I entered the garage almost screaming. I said that nothing worked on the bike. Diego (ed. Gubellini, his chief technician) explained to me that, to improve, I had to explain the problems to him. Saying that nothing worked didn’t help. This year in Assen, during practice, I was taking more than a second from Viñales. I kept my cool, and won the race. His attitude helped me in difficult times. Yesterday, I finished fifteenth in qualifying, and I simply accepted it. Today I’m world champion.”

Is the world champion the best rider? Is the M1 the best bike?
“I’ve never ridden the others, so I can’t say. From the comments of the other riders, it would seem not. But that’s okay for me. It allowed me to win the title, but we have to work. We’re still struggling in some areas. If we can get more power, then it could become the best bike.”

What did you think when you saw Bagnaia on the ground?
“It’s not the way I wanted to win this title, but it wasn’t just one race, it was sixteen. It was also thanks to Pecco that I improved this season. He forced me to push harder and harder, as I did with him.”

You made a dream come true today. What’s next?
“Win another title.”