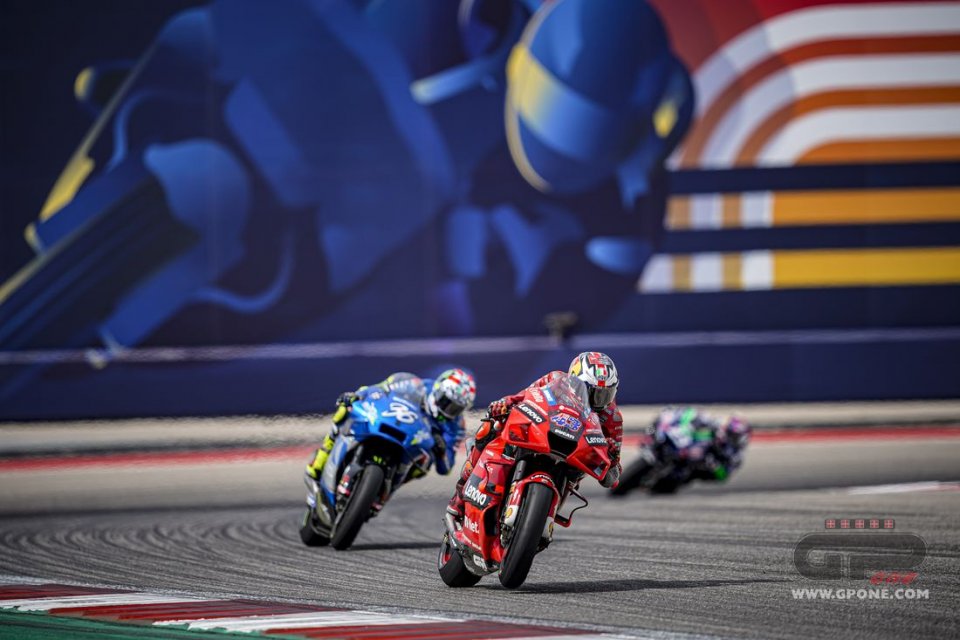 This year, Joan Mir and Jack Miller were often at loggerheads on the last lap of the races. It happened in Qatar, then again in Misano and, finally, in Austin. At Turn 16, the World Champion’s Suzuki, in an attempt to overtake, brushed against the Australian’s Ducati, ending with Bastianini overtaking both.

“First of all, I want to apologize, because I don’t like to cause contact while overtaking,” Joan explained. “I was struggling in acceleration and overtaking, even though Miller was much slower than me, so I waited for the last lap to prepare for an overtake. I did it in the first sector of the track, at the chicane, but he got back in front on the straight, then he just tried to close the trajectories. He was riding a bit strange. At turn sixteen, he made a very tight line. I didn’t expect it. I went to the curb and, at that point, I just tried to avoid the impact, but I touched him. Luckily, we didn’t fall, but Bastianini overtook us.”

The Stewards judged Mir’s maneuver out of line and downgraded him one position.

“I don’t understand the penalty. If that's the case, then we can't  try to overtake anymore, and the races lose their essence,” the Suzuki rider complained. “The commissioners weren’t  the same as in Qatar, when the same happened to me with Jack. Maybe they were on vacation today. I waited for him on the straight to apologize, but he threatened me Australian style,” he said jokingly. “I understand he was angry, and I can’t say anything bad about him. I apologize.”

If for Joan the penalty was too harsh, for Miller it was too soft.

“There’s not much to say. On the last lap, he repeated what he did to me at Misano. He took me out, and I was passed by two riders ,” the Australian rider commented. “I couldn’t do anything different. I was suffering with the front, and I was protecting my trajectory. At that point. he had no room to overtake me. It was a maneuver similar to Aegerter’s with Torres in the MotoE, with the difference that  he was given a 30-second penalty in that case. Luckily, I didn’t fall.”

Jack closed the matter there, before talking about another overtake, the one he facilitated for Bagnaia.

“I was fast at the start of the race and he at the end. At that moment, he had a better pace than mine, and I didn’t want to mess with him,”  he explained. “Having one less overtake to do is always better. He was able to limit the damage with Quartararo, and now we’re first in both the constructors and the teams championships.”

The Soft front will be a good solution for the less aggressive riders who need good feedback and high grip levels at maximum lean angle. The Hard...
1 day 23 hours ago

“I don't know when he'll be back. When he feels ready, he’ll come back, not before. Then he’ll have to work on his muscles, see if his shoulder is...
2 days 11 hours ago

"In the morning I was closer, but in the afternoon Fabio made another step, or rather a ‘big step’ in braking. And I was already at the limit. That’s...
2 days 14 hours ago

From the day he was born into a racing family on February 16, 1979, Valentino Rossi seemed destined for racing greatness. In this richly illustrated...
2 days 19 hours ago