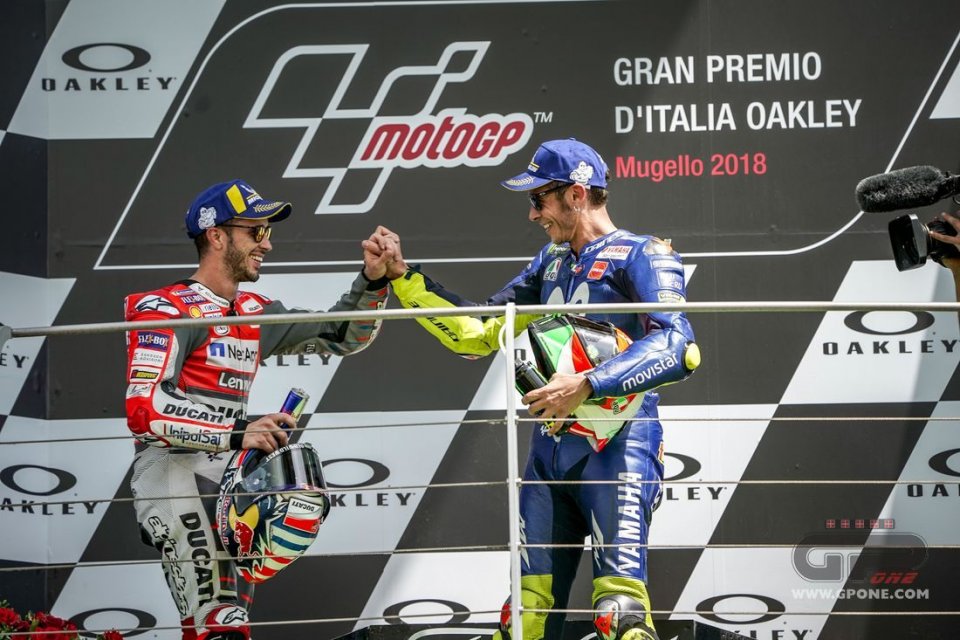 One thing’s certain: “I’ll stay where I am. I won’t join the official team,” Valentino stated, as he continues to be the spectator of a whirlwind of changes around him, all triggered by the divorce between Viñales and Yamaha. A chain reaction that will perhaps come to an end in Aragon. Meanwhile, at Silverstone, Crutchlow has gone from Petronas’ green to Iwata’s official blue, while the Doctor will have Jake Dixon at his side. But, for the next race, we’ll be seeing Morbidelli with Quartararo and Dovizioso, who’ll be sharing the garage with Rossi.

“I thought Viñales and Yamaha could fix things,” Valentino admitted. “But I don’t know much more. Maybe there were other problems. This move has created others. Let’s see what’ll happen during the next races.”

How do you see Maverick on the Aprilia?
“I think he’ll want to race as soon as possible, and it’ll be interesting because he’s a fast rider and with a competitive bike. Then they’ll have to figure out who’ll go to the official team – maybe it’ll be Morbidelli – and who’ll be my teammate.”

He then spoke about Dovizioso…
“I read that, and I’d be really happy if that happens. We went up against each other many times in the past, and we have a good relationship. It would be fun to have him as a teammate.”

He’d be your last teammate. How are you facing these last races after the announcement of your retirement and paternity?
“Becoming a dad doesn’t change anything. It’s about my private life. Instead, having said that I’ll be retiring has reassured me. Two races have already passed since I did it. The summer break was the right time to decide. But there are still eight or nine races to go, and I want to keep giving it my all.”

Hamilton is still suffering with post Covid symptoms. Did something similar happened to you?
“It’s true that my results got worse after I got sick, but I don’t think that’s the problem. In the end, I was sick for a couple of days. I felt tired for a week, but then I started training normally again. I feel I’m at one hundred percent.”

What do you expect from Silverstone?
“It’s a track that I like. Long, fast, technical, tailored to the MotoGP. I’m usually fast. In 2019, I started from the front row. I was aiming for the podium but, unfortunately, I finished fourth. I’ll try to start from there. Two years have passed, and many things have changed.”