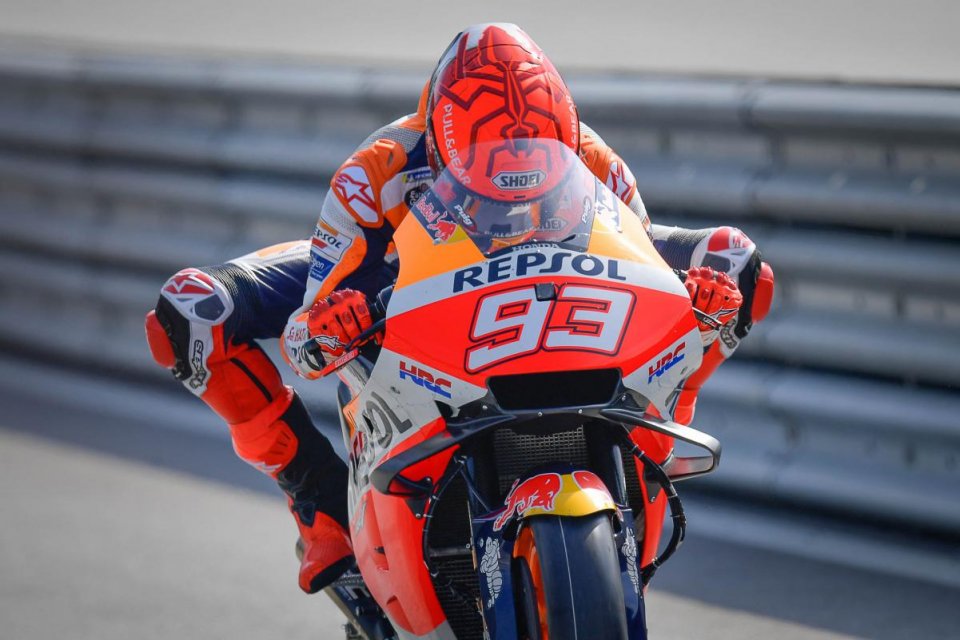 There are four Ducatis in the top six, but there’s also a Honda among them: Marc Marquez’s, with his fifth time trial in qualifying, half a second from the reference set by Fabio Quartararo. An encouraging performance for #93, despite a fall in free practice.

“I lost the front and fell,” he  explained. “I think it’s partly due to the bike’s set-up, which should provide greater stability. The fact is that, when I lose the front, there’s nothing I can do. I can’t make certain saves like I used to. I end up falling. In the end, these things happen, so I have to try to be gentle and composed on the bike.”

He then talks about the tires.

“I used the soft tire last weekend, and we’re assessing tomorrow. At the beginning of the race, the soft is competitive, but then it suffers the blow in the second part of the race. So, we’ll have to make careful assessments, since there’s also the medium, which is a tire that allows for greater consistency on the track. Among many things, we’ll also have to figure out the conditions of the track to get our thoughts straight.”

One of the aspects that limit Marc is undoubtedly braking. We all, in fact, remember the way Marc enters corners by braking really late.

“It’s the whole thing that limits me. My body a bit, the bike a bit. Under certain aspects, I’m similar like in the past in braking, even if the problem is that I can’t be at my best physically and constant. I also suffer changes in direction, where I can’t be as precise as I’d like to. The bike is evolving, but we need to progress and improve.”

“Jorge is doing a great job, and he already demonstrated it on his debut in Qatar. He was perfect last Sunday, and I’m convinced that he’ll try to win again. This is a track that enhances his  qualities, but we also have to assess him on tracks like Silverstone and Aragon. If he’s fast there too, it means that he can fight for the World Championship in 2022.”

“Today, Maverick demonstrated that he spoke correctly, explaining what happened. His behavior is logical, since he wants to be on the track at Silverstone. Of course, if he stays still, he risks consequences for his future.”