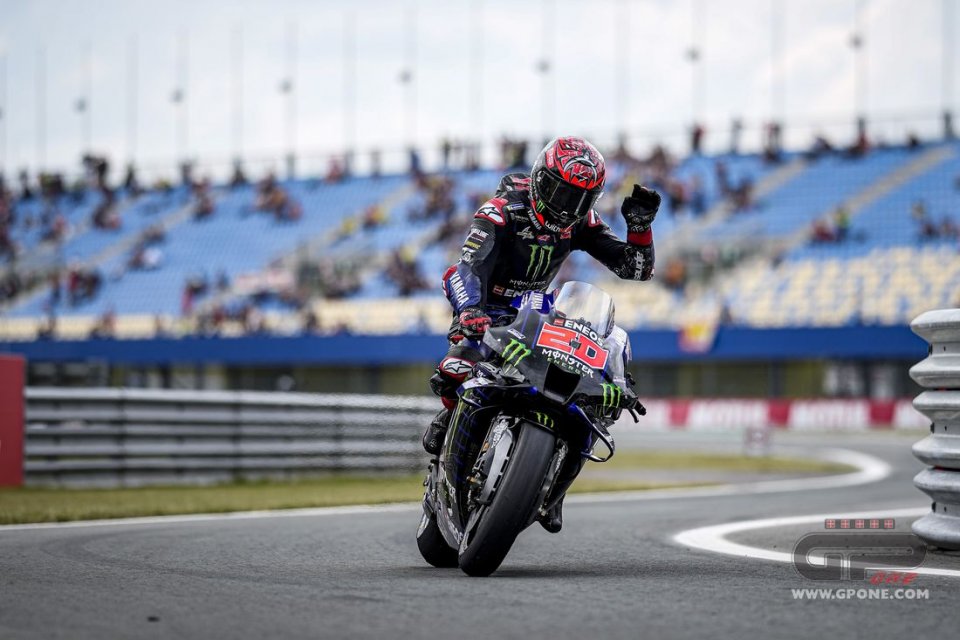 He missed out on pole position by just a fraction and, although he tried to hide it, it bothers Quartararo a bit. The most important thing, however, is to know that when it comes to pace, he was the benchmark today and therefore he will be the man to beat.

"In the last lap of qualifying I pushed a little too much and made a small mistake that made me lose a little bit - Fabio justified himself, as if there was any need - In general, this weekend I have never had a good feelings with the soft tyre, unlike with the medium and hard. I have a good pace, I feel good and the choice between the two compounds will depend on how the warm-up goes, even if I could race with both ”.

The Yamahas clearly seem to be the favourites for tomorrow…

“It's true that Maverick and I have a good pace, but the same happened to me in Barcelona and in the end things didn't go as planned. On that occasion, Mir didn't have a good pace but came close to winning, so it's not as important a step as the feeling on the bike. Anything can happen in the race ”.

Don't you think it might be a battle between you and Vinales?

“With Maverick I will have to be clever in the first laps, if we have to play something in my opinion it’s great to be clever at the first lap and see at the end. But it will depend. I feel great to fight for the victory. It's not that because my main contenders are behind me that I need to be careful. For me, it's the beginning of the championship, we are not even in the middle. So, if I have one chance to fight for the victory I will go for it. If I'm too much on the limit, I'm not stupid so I will not make a mistake – or I will try not to make a mistake. So, it will depend on the situation, but right now I feel I can fight for it."

But isn't it important to increase the lead in view of the two races at the Red Bull Ring?

"To be honest, Austria is a track that last year was a disaster for us but I think more because we knew all the problems that we had last year. But for me the bike has improved a lot in the braking area and our holeshot device is working better. Electronics we still have no problem, so I think Austria is not a bad track for us. Of course, we miss the top speed, but in 2019 I was able to fight for the podium and if I'm not wrong Maverick and Valentino finished fourth and fifth. It's not a bad track for us, just it's difficult, not the best one. Here, I will do my best. Of course I want to increase my gap in the championship but I don't think it's the way to approach the championship at the moment. So, I just want to enjoy tomorrow, it's a fantastic track and enjoy the 26 laps."

Do you really think tomorrow you will have other rivals besides Vinales?

"Looking at the past, Bagnaia is good at tire management and he will be there, as well as the Suzukis and Oliveira, difficult to know who will be the main opponent."

Vinales says that with little grip it is impossible to ride the Yamaha, do you agree?

“It is true that sometimes when there is poor grip we struggle, but something strange happened at the Sachsenring, because the bike turned better when the tires dropped. I haven't had any major problems this year and, frankly, I only look at Maverick's data when he's faster than me, to improve."