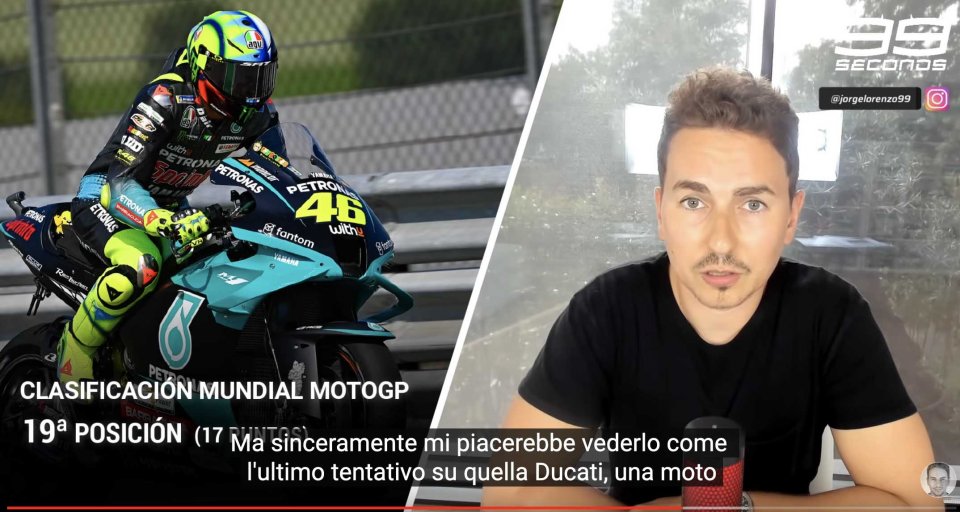 Five hundred and eighty-one days after his last victory - at Valencia 2019 - Marc Marquez is back on the top step of the podium at the German GP, ​​at Sachsenring. This is why Jorge Lorenzo in his VLOG '99 Seconds' spoke of the success of his compatriot and former teammate.

“Marc is back, the best is back. I want to tell you so clear. In my opinion, he is the holder of this race, because regardless of whether Quartararo continues to lead the world championship, whether young riders will arrive, like Quartararo or Mir, Márquez technically is still the best, he will continue to be the best physically  because he is a beast and he always wants to win. He has more ambition  than everyone else. And when he really recovers 100%, I think he will return, not to win all the races, but he'll be very strong as before. "

Lorenzo: "Marquez is the best, regardless of the young riders who arrive"

Jorge also recognized that eleven wins in a row on the same circuit, in three different categories, is something fantastic.

"They call him The King of the Ring. Eleven wins in a row, there must be an explanation, a reason. Left-wing circuit, narrow and buzzing in those first two sections where Honda does it well. The start is crucial and Marc was a rocket. And the rain. Oliveira recovered many metres in the last laps, it was too late and Marc had enough control of the race. "

The Portuguese rider for Jorge will be one of the contenders for the title.

Lorenzo: "Oliveira was patient and will fight for the wins with Quartararo and Marquez"

"Oliveira is the fittest rider on the grid today, second in Mugello, first in Montmelò and again second here. He, Márquez and Quartararo are the three riders who will share the victories, with the exception of a Ducati at a circuit. Talent has prevailed in the case of Oliveira and with patience he has found his place at KTM and started to get the results he deserves. Well done for him and he has to continue like this. "

Lorenzo then went on to talk about Quartararo and Aleix Espargarò.

"Fabio Quartararo is also doing great. These were very valuable points and he is still leading. In the first corner he was bit hesitant, but in the end he got a great third place. Aleix Espargarò, a good season for him, he’s doing better than ever. This is the first time he gets on the front row. He made a fantastic start, he could not get that opportunity to fight for the podium, but he's getting closer and closer. "

Then Jorge expressed his opinion - without filters - on the two big losers of Sachsenring.

Lorenzo: "Vinales: if you are not in good spirits you go from winning to losing in MotoGP"

"Morbidelli and Viñales were the disappointments of this race. This is MotoGP and if you are missing something, maybe a circuit you are not good at, you cannot find the ideal set-up, you are not in good spirits, you do not have high self-esteem, you can go from winning races to finishing last, as has happened to Viñales. He is having the worst stage of his career. It is difficult to evaluate what is happening in that box. Maverick may have been the rider who has changed the most technicians in recent years, but it has proven that the rider is the most important thing. Obviously the bike is important, but then you have to look at the rider. The problem with Viñales is in his head and there are many factors such as motivation, conviction, security. It's the way you face problems, how you are positive and you always see the glass as half full and not half empty. In short, I think that’s the real problem with Maverick, but that’s just my opinion. "

Lorenzo: "It would be an important stimulus for Valentino to race his last season with Ducati"

After talking about his former comrades in arms, Jorge turned his attention to Valentino Rossi and did so by expressing two conflicting opinions: the first is that Vale will retire at the end of the season; the second that perhaps he would do well to accept the Ducati challenge in the team he himself created with VR46.

"At 42 he is suffering a lot this year. He is currently 19th with only 17 points. It is very difficult to predict what will happen. He gives me the feeling and if I had to bet on it is that Valentino is very likely to retire this season. But honestly I would love to see him as the last attempt on that Ducati, a bike that would be an important stimulus for him. Maybe it could give him better sensations than he has been experiencing in recent years with Yamaha. I think this will be his last season, but maybe I'm wrong".