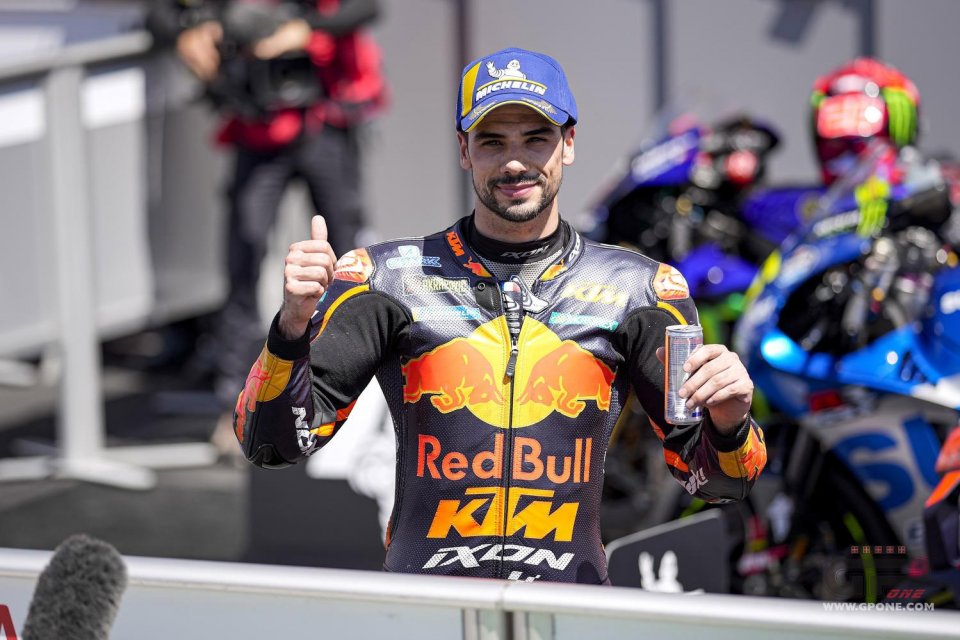 Miguel Oliveira picked up his third victory in MotoGP at Montmelò after the successes of 2020 in Styria and Portimao. He did it after producing a simply perfect race, during which he managed to contain a Fabio Quartararo indicated by everyone as the man to beat today. The Portuguese KTM rider, however, kept a cool head during the duels on the track and made the most of the clear step forward made by KTM thanks to the new chassis introduced at Mugello.

"It's difficult to put into words what I feel – were Oliveira's first words - this was probably the best race of my career. Everything was difficult, tyre management, staying in control of Quartararo when he passed me and then when I passed him again. It was an incredible race, I will never thank the KTM guys enough for the bike they gave me, which allowed me to get onto this podium here today. Thanks also to the fans who are finally here in the stands, it was nice to race with them".

This RC16 now looks like a competitive bike everywhere…

"Everyone is doing their best in KTM to be at the top with the bike from all points of view. Now we have a good package and it's something we have been missing in the past. Our bike is no longer the beast of 2019 and this makes it friendlier to ride. We have a good team and I’m also talking about the riders because we all give the factory some great suggestions. I expect to continue this way until the end of the year”.

Your indications are also accompanied by the work of Pedrosa. Is that an added value?

"Dani Pedrosa is doing a fantastic job. He and the whole test team are very attentive to our indications, all the feedback from the Grands Prix goes to them and they are doing a great job. When I tested this new frame at Mugello, comparing it to the old one in practice, I felt fast with both of them. I think both solutions worked over the flying lap, but this frame allows us to be more relaxed with the rear tyre. This is the difference, then the fact is that in MotoGP all the details matter a lot and we must always try to do our best even with the small things".

Compared to the Ducati and the Yamaha, what are you still missing?

"We still don't have the speed to pass a Ducati on the straight. We can stay close, but they are still too strong in fifth and sixth. I was behind Fabio in a different moment of the race. He was clean, we know how the M1 behaves. I think that without the problem with his leathers he would have finished the race further up. We immediately saw at Mugello that the new parts would have helped us a lot. I cannot go into too much detail but it is clear that every little difference counts in today’s MotoGP. I feel on good form, I am fine physically and mentally, so I can only feel in great shape ".

How did you experience your race being almost always in front?

"From my point of view it was difficult to understand what was happening behind me. At a certain point I created the gap that I needed to ride calmly, make my own lines and not make mistakes. That was the key to finishing the race like this. The final laps were very difficult for me because I had a hard tyre at the front and in the end it was difficult to manage it well and not crash. I was not sure I had more than Fabio, he was the fastest all weekend, but I knew that if I had bothered him, maybe it could have been different for him. That's why I attacked him right away. "

Do you expect a multi-year contract with KTM like Binder's?

Do you think Quartararo should have been stopped with a black flag?

VIDEO – Pedrosa’s advice to Oliveira: “Use the hard, I did”

Oliveira: Without the initial difficulties, I wouldn’t have left my comfort...