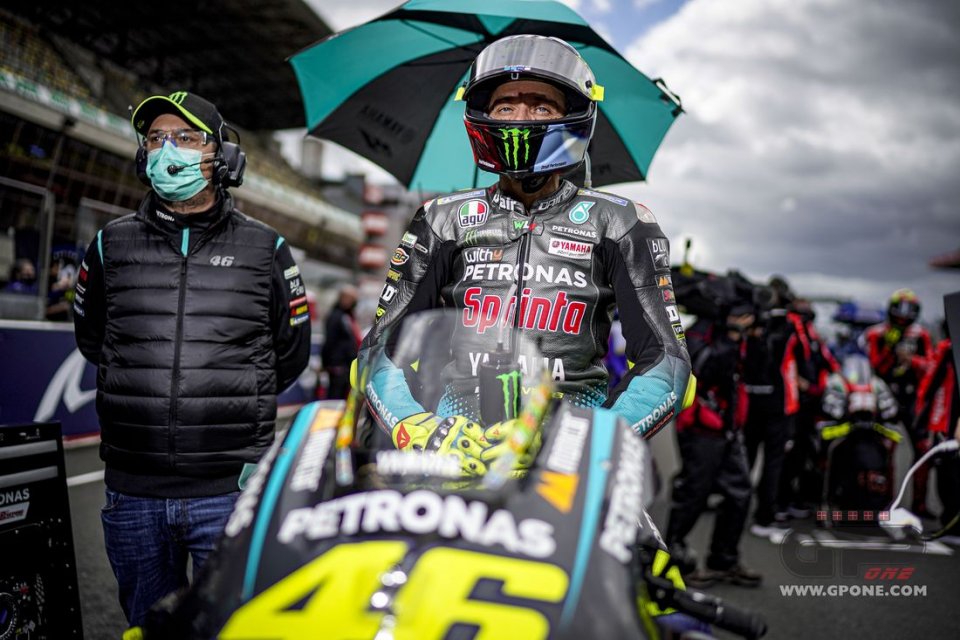 Mugello is like no other Grand Prix, especially for Valentino Rossi, who's ridden in the Tuscan hills nine times. This weekend will be his 25th race at Mugello (since 1996, he only missed the 2010 one due to injury), and he’ll be in good company, with many of his students on the track, for the first time in all the categories. As always, Alessio “Uccio” Salucci will be at his side. His shadow in the garage, but also his right-hand man for the VR46 teams.

“We’re in every class. Moto3, Moto2, and MotoGP,”  Uccio said satisfied. “I’m happy for the CIV guys. It’ll be very important for their growth if they take this race with the right philosophy. They have to try to look at others to improve. If, instead, they want to beat those in the world championship... it’s all wrong. We’d only do great damage. I tried to explain it to both Alberto and Elia, but they might not give a damn about what I say,” he said  laughing."I hope they’ll take it as an opportunity to learn.”

With this grid, it’s truly a home Grand Prix.
“For me and for Vale, who are old, Mugello arrived before Misano, and we really care about this GP. We grew up here, since 1996. It’s  an important event and, having three teams, or rather two and a half, with all Italian riders who we’ve developed since we were little, is an immense satisfaction.”

What’s your first memory of Mugello?
“In 1994, Vale went there on a motor scooter and I, if I remember correctly, I had someone take me by car. I have the image of the two of us in front of the paddock. We were waiting for Maurizio Vitali, who was supposed to bring two passes, but he never arrived, and I’m still reprimanding him about it today,” he said laughing. "We went to see the race at the Casanova Savelli, and it was great to see Schwantz and Doohan, Capirossi, Romboni and Biaggi. I still remember that vibe.”

What’s your best memory from many years of racing?
“The first time is always special. Vale’s first victory in 1997 in the 125 is memorable for me. Only two years before, we were waiting for the pass outside the gates.”

In all, Valentino won nine races at Mugello, seven in a row. What’s special about Mugello for him?
“Maybe because it’s a difficult and tough track, where you can make a difference. There are many corners, and Vale was really strong there. I remember at Casanova Savelli, at the Arrabbiate 1 and 2. Then the extra motivation of the home race also played a part. It’s a number of things that makes the difference.”

Are there also any anecdotes about the nights in Mugello?
“I remember Thursday night,when we went to the Fan Club dinner, with Vale in disguise wearing a fake beard. I’m talking about the early 2000s. At that time at Mugello, there were already 70,000 people on Thursday evenings, and we rode scooters, wearing hoods, through the streets to the restaurant. They’re memories that I’ll never forget.”

Didn’t they ever catch you on the way?
“We did it for about ten years, and sometimes they did, luckily always at the end of the dinner. It was a party, but we had to get away quickly. We Italians are fiery,” he said laughing. “I think we are the number one audience. I remember the roar every time Vale would pass the Casanova Savelli. From the garage, I knew he was there without being on TV.”

There’s also a bad memory concerning Mugello: the serious injury in 2010.
“The friendliest track also betrayed us, but I don’t blame Mugello. Vale had been hurt earlier, on April 19th, my birthday, in cross. I was in Valencia auto racing, in the GT Open, and they called me saying he had hurt his shoulder. He might have needed surgery, but there was no time for it, so the doctors, along with Vale, had decided to continue. But he was in bad shape. Lorenzo was going strong. It was a combination of things. Vale was struggling in left-hand corners and, at these levels, when you’re not at your best, but you try to give your best, that extra you give screws you up. It was the motorcross' fault, not of Mugello's,” he laughed.

What kind of Grand Prix will this weekend be for Valentino?
“After the first few races in total darkness,Vale found something he liked from the Jerez test, and the Yamaha gave a little more support, in general. In my opinion, with a normal weekend at Le Mans, we could have had a good race. We hope to find those same sensations at Mugello. Vale is back to having fun, and we can have a good race. Mugello’s arriving at the right time, and the weather also seems quite stable.”

Is there a risk this could be the last Mugello GP for Valentino?
“There’s a risk, although I sincerely hope it’s not. Like he said, he wants to wait before deciding, perhaps during the summer break, when he’ll have more time. He’ll do it, and the closest people, like me and Albi (ed. Alberto Tebaldi), will have to respect his choice. We already know our position. To continue for about another year,” he said laughing. “But the important thing is to have fun.”

Bastianini said he was lucky his airbag exploded at Mugello after warmup lap...

Jason Dupasquier, Mugello and the courage of the curious Ulysses