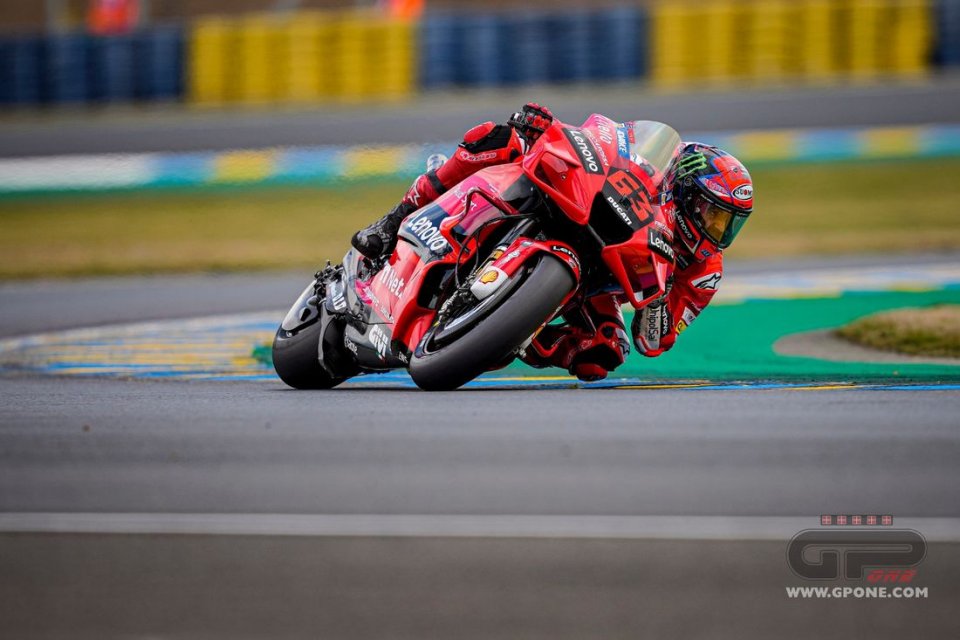 It’s strange to see Bagnaia in 12th position, with the real risk of having to go through the Q1 tomorrow if it rains tomorrow morning. This doesn’t mean that Pecco was in particular difficulty today, but the problem was falling at the wrong time.

“In the morning, when it was wet, I felt great, while I struggled in those conditions last year. Today I was the only one, along with Zarco, to use only one set of tires and to improve myself in the finale,” Pecco  explained. “In the afternoon, the bad luck was falling after seven laps due to the cold. At that moment, my pace was very good, I was improving, and it would have been enough to enter the Q2 directly.”

Instead?
“I went back to the pits and went out with a new soft tire, but it wasn’t as performing. I realized it,because I risked losing the rear twice in the exit lap. So I went back to the garage, but I had to mount a medium.”

Why?
The fall was logically not foreseen, and we had only prepared two rear soft tires. It was a shame because I was fast. I lost the Q2 by only 89 thousandths."

Would it have been possible to prevent the fall?
“No, I fell from a standingbike, without doing anything different from the lap before. The problem is the cold. This morning, it was 8 degrees and, in the afternoon, 12. In those conditions, it’s difficult to warm up the tires. Michelin has done an incredible job, but it’s difficult to race at Le Mans in May. In addition, the pit lane is very long. It takes us more than thirty seconds to cover it, and this causes the tires to cool down. In the end, it’s safer to ride when it’s wet. When dry, you have to be very precise because you can lose the front very quickly. It’s difficult to manage.”

There doesn’t seem to be a solution.
“We always come here in May. We have to talk about it in the Safety Commission. The idea is to move the Grand Prix further forward, perhaps, instead of Mugello. I know that Aleix Espargarò also agrees. Also, I’ll ask why they extended the pit lane again. Last year it was shorter. We entered the track once we finished in the pits. I don’t know why they changed it.”

Are you worried about tomorrow?
“I hope there’s good weather, maybe 22 degrees,”  he laughed, ”But I know it won’t be. It’ll be difficult to enter the Q2 directly in the FP3, even if the asphalt won’t be dry, because it’ll certainly be cold. But never say never. I’ll do everything possible.”

Bagnaia convinced Dupasquier's tragedy can be accepted, but not forgotten