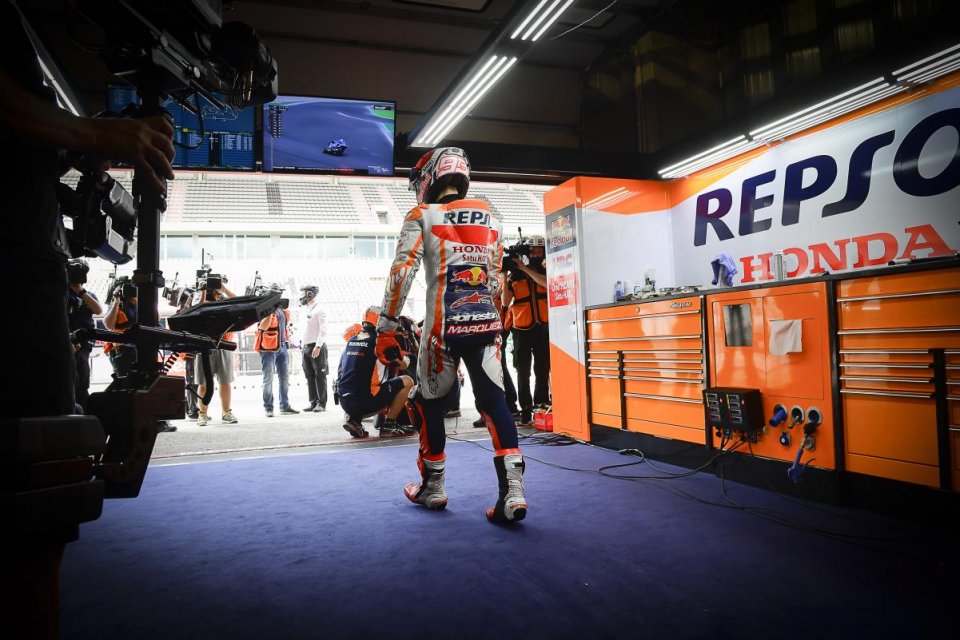 The real challenge is the one with himself and his body. Marc Marquez knows this well, and he doesn’t beat around the bush about it, so much so that the sixteenth time trial at the end of the day, one second from the top, doesn’t make the grade. But managing his energy is his priority, so he doesn’t waste it unnecessarily in view of the weekend.

At the end of Friday, the Spanish rider is, in fact, called to chase, even if his goal is to wait until Saturday, with the aim of changing pace to get closer to the best.

“Right now, I’m focused on my body and position on the bike,” he began. “Jerez is different than Portimao, and my approach was different. I felt good in the FP1 while, in the afternoon, I didn’t ride, like I usually do. In fact, I felt a kind of lack of strength in my muscles.”

Marc then goes into detail.
“There are many braking points here, and you have to push the bike a lot. I’m strong in left-hand corners, I struggle in the right ones, so much so the Honda jerks in riding it, as if I were Robocop. I can’t be fluid and, when I go long, I let the bike go, perhaps trying not to hold it and closing the corner anyway.”

For everything he’s doing, you can’t help but admire #93, who has no intention of throwing in the towel.
“The problems stem from my position on the bike. In some places, I feel as fit as ever, while in others I don’t. The priority is to save  my energies for the weekend, not wasting them unnecessarily. I talked about this with the whole team, as well as with Alberto Puig who,  unfortunately, is not here with us.”

But Marc’s attention returns to the track.
“In left-hand corners, I’m the fastest Honda rider, and this aspect gives me confidence, so much so that the T1 is undoubtedly my strong point. Last year, I fell at turn three, but I still manage to be fast in that corner. Obviously, going through it on the first lap this morning was special, but then everything became normal I’m not afraid.”

His mind is now projected towards Saturday.
“Today I had plans to try some things, and tomorrow we have another plan. We work in relation to what my physical conditions are and obviously to the work that needs to be done. Maybe I get out of the garage, do four or laps, and then come back. All to save  my energy and not waste it. Apart from that, I can still say that, this afternoon, I feel better compared to after the FP2 in Portimao. Tomorrow is another day, and I’ll try to do more laps, arriving prepared for Sunday.”

Finally, from a e physical point of view, his last consideration is about his elbow.
“My elbow position is not what it always has been but, if I want to, I use it. During each outing, I focus a lot on my position on the bike, since that’s where most of my problems come from.”