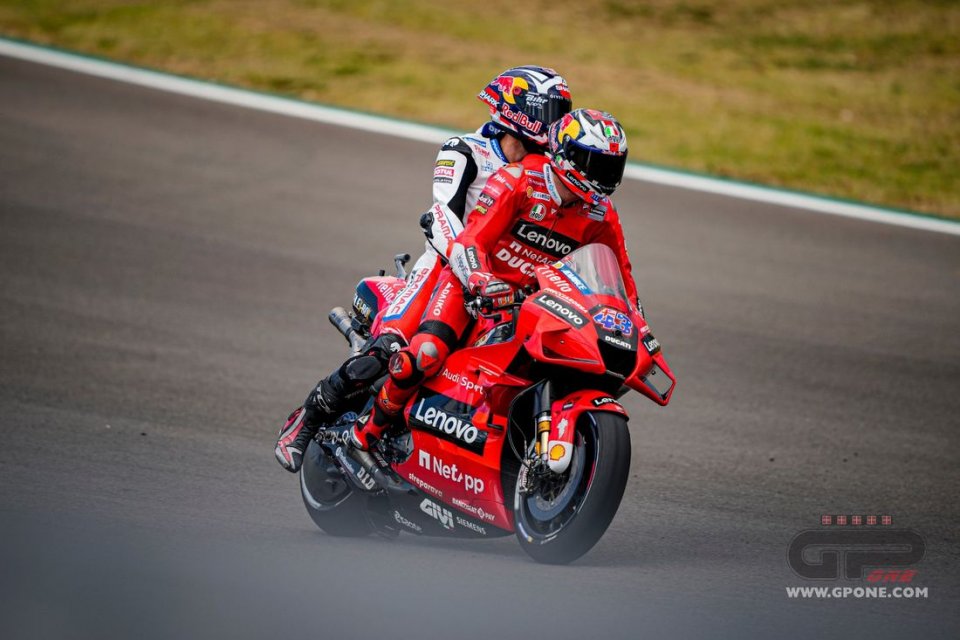 Johann Zarco felt the thrill of getting on the factory Ducati bike at Portimao… even if only as a passenger. The Frenchman had to abandon his Desmosedici when he stopped for a practice start, after the bike burst into flames in the side exhaust area. Jack Miller, now the official MotoGP taxi rider, came to his rescue, as he often picks up his colleagues who stop along the track.

“Unfortunately the Ducati is not so comfortable for two - Johann smiled - It doesn't have a passenger seat and I was afraid of breaking something if I sat on the tail”.

The important thing in the end is that his Desmosedici was not damaged.

“Why did it catch fire? Maybe because we have 300 horsepower and we go so fast on the straight - he joked - I'm not sure what happened, but it was probably a combination of things: at the end of the session I had a problem with the exhaust and that area is always very hot when I stop, you have to be careful ”.

Incident aside, Zarco ended the first day of practice in Portimao with the sixth fastest time. A good result, but one that did not completely satisfy him.

"In the morning we found some complicated conditions, with the wet track, while in the afternoon they were good and I was able to work to understand the tyres and my sensations on the bike - he explained - I'm quite happy because I'm in the good group but I still can't ride relaxed, I’ll have to take a step forward to keep up with the pace of the best ”.

The Frenchman, however, already has an idea of how to do it…

"Bagnaia did a great job today and I can look at his data to understand where I’m losing - he said - My main problem is in the middle of the corner: at maximum lean angle I’m lacking a bit of stability and as a result the bike gets nervous when exiting the corner".